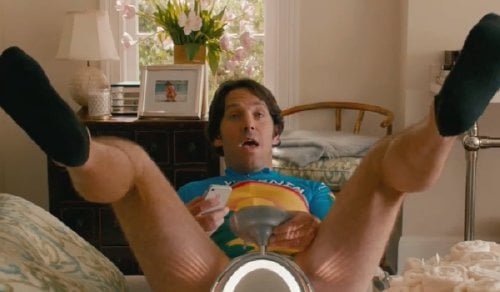 We first met Pete (Paul Rudd) and Debbie (Leslie Mann) years ago in “Knocked Up.” Now, married with children, the couple are at that critical crossroads in their lives when they realize that “This Is 40.”

Comedy producing/writing/directing juggernaut Judd Apatow shares his midlife crisis with Paul Rudd as his standin starring with real-life wife Leslie Mann and daughters Maude and Iris and the irony may be that the film represents a midlife career crisis for the Apatow brand. While the film is certainly funny and even insightful, Apatow's recipe for delivering raunch with sweetness doesn't go down well within a family structure, even a well worn marriage, and the display of entitled irresponsibility at this level of wealth can be awfully off putting. There's even a stereotypical racist joke. The film's rambling structure, which involves the week leading up to Pete's 40th birthday bash, is almost built for hit and miss, but there are moments, like when Debbie's surprise offer of an early morning bj devolves into a family shouting match or when two wrongs done against an irate parent (Melissa McCarthy) at their kids' school equals sweet collusion, any bond in a storm. Albert Brooks and Jonathan Lithgow are both tremendous pluses as troublesome dads and Graham Parker is an awfully good sport as the rock legend Pete's trying to sell and can't. As she did earlier this year in "Friends with Kids," Megan Fox proves she can be a natural supporting player, but on the same level, Charlyne Yi isn't.

Judd Apatow is one of those comedic filmmakers that are a case of diminishing returns. Early on, his subjects were in their 20s and acting goofy and irresponsible was funny, especially to that same age group that went to see Apatow’s earlier movies. He aims at that same audience, all grown up now, but, instead of goofy comedy, we get a bitter relationship between two people (Pete and Debbie) who are too immature to face real life – like turning 40. There is a problem with “This Is 40”: people like this – Debbie, Pete, their fathers (John Lithgow and Albert Brooks) and their friends – do not exist in this (the real) universe. It is telling when the most likable character, sexy but honest Desi, is played by Megan Fox, as the rest go through middle-aged Judd Apatow antics. Paul Rudd is one of my favorite comedic actors but his Pete evokes no emotion from me. I have never been a fan of Leslie Mann (Mrs. Judd Apatow) and, with her selfish and self-centered and oft-dislikable character Debbie, I am still not. One of the subplots in “This Is 40” follows Pete and his failing recording label business. He is up to his eyeballs in debt, few prospects and a father (Albert Brooks) who mooches money from his strapped son. Pete sees a glimmer of hope in getting a recording contract with music veteran Graham Parker. But, the performer is well past his prime and his record is a bust, leaving the struggling businessman in even more dire straits. This problem, though, telegraphs the usual Apatow happy ending and is just another reason that the auteur needs to find his way again. A comedy movie should be well-paced, snappy and keep you laughing for at least some of its (should be) 90 or so minute runtime. Only epic stories deserve to be over two hours long and, at 135 minutes, “This Is 40” is no epic. And, it is no comedy. What we have is a man (Apatow) who appears, through his cynical story – at one point, in bed, Pete and Debbie discuss how they would kill each other (creepy and unfunny) – to be facing a mid-life crisis of his own. The industry still considers him a golden boy but I think he is tarnished goods now.