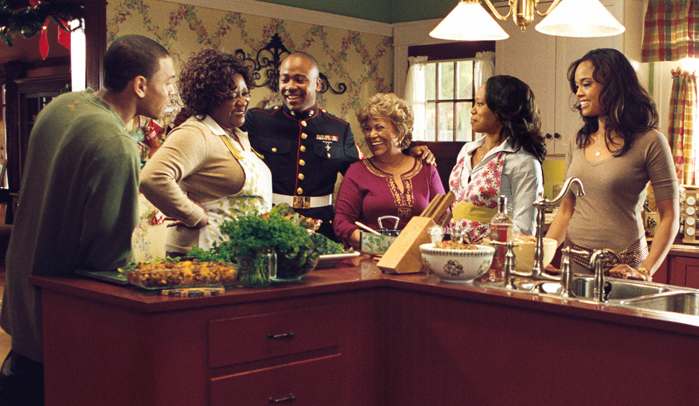 Shirley Ma' Dere Whitfield (Loretta Devine, "Crash," "Dreamgirls") begins her annual holiday preparations by temporarily banishing live-in lover Joe Black (Delroy Lindo, "Wondrous Oblivion," "Domino") from her bed. It is a secret some of her six children have already guessed, but they all have something of a surprise themselves beginning with the appearance of eldest brother Quentin (Idris Elba, HBO's "The Wire," "28 Weeks Later") for the first time in four years "This Christmas."

Writer/director Preston A. Whitmore II ("The Walking Dead") mixes his own life experience with time worn genre cliches yet produces a holiday movie that feels fresh thanks largely to his appealing and talented cast. Loretta Devine packs sexy with maternal, her sleepy, sexy eyes and resplendent figure combined with the warmest, truest of smiles, grounding the film as the wise but worried matriarch. Besides Joe's status as live-in lover, none of Ma' Dere's children know that she's divorced their father, Senior, a jazz musician whose musical calling was greater than his nesting one. Musician Quentin arrives, therefore, with a dislike of Joe, seeing him as a supplanter he is determined to roust. His arrival is also not purely motivated, as he's ducking a serious gambling debt. Eldest sister Lisa (Regina King, "Ray," 2007's "24," "Year of the Dog") is a doormat to husband Malcolm (Laz Alonso, "Captivity," "Stomp the Yard"), who is pressuring her to convince her siblings to sell the family dry cleaning business to finance a business deal. Lisa is always at natural odds with Kelli (Sharon Leal, "Dreamgirls," "Why Did I Get Married?"), a NYC businesswoman with the college education who rankles at everything her brother-in-law does. On leave from the Marines, Claude (Columbus Short, TV's "Studio 60 on the Sunset Strip," "Stomp the Yard") has a double whammy up his sleeve, revealed when he gets arrested after pulling a gun at the El Rey, the hometown nightclub the siblings visit. Home from college, Mel (Lauren London, "ATL") is focused on finding some nookie time with boyfriend Devean (Keith Robinson, "Dreamgirls"). Last but not least, live at home Michael 'Baby' Whitfield (teenaged singing sensation Chris Brown, "Stomp the Yard") is afraid to tell mom that he has inherited Senior's genes. At first, "This Christmas" seems stilted, with Whitmore reconfiguring clusters of family members to stand around talking, but once he sets his game pieces on his chess board, the film falls into a natural rhythm. The ensemble cast works well, although some stand out more than others. Old pros Lindo and Devine are just right and enjoy well worked chemistry together. King aces a complex character and her sibling chafing with Leal is the real deal, simmering as it does over genuine sisterly love. Mekhi Phifer ("Clockers," TV's "ER") works his natural warmth and charm as the local firefighter who makes Kelli reconsider her stance on single life. In his second film role, Brown, who elicited screams and shrieks at the screening I attended, is a natural and performs a terrific version of "Try a Little Tenderness" as well as the titular song. As the outsiders coming into the family for the first time, Robinson is a cutie who gets his turn with a nicely delivered dinner table speech and Jessica Stroup ("The Hills Have Eyes II"), as perhaps the film's biggest twist, is wholesomely pretty and sympathetic. Ronnie Warner as Dude and David Banner ("Black Snake Moan") as Mo provide some humor and action as Quentin's debt collectors (Warner has a blast with the film's closing dance gauntlet, the cast letting their hair down in an enjoyable coda). Sure there are some problems with "This Christmas." Ma' Dere's huge, prosperous looking home begs the question of how the Whitmores afforded to live here on a dry cleaning biz reportedly not making much money and a missing musician father. Then there's Rosie (Lupe Ontiveros, "Real Women Have Curves"), a character who does nothing but stand around and smile, a Hispanic who could only be a maid, although her presence is never really explained. But there is warmth and humor enough to distract one these questions. Lisa's rebellion is a female empowerment crowd pleaser and the Christmas morning church scene earns every one of its hugs.