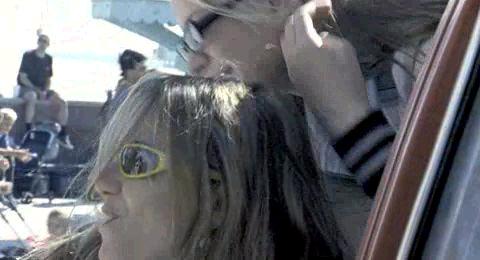 What's it like to be a 13-year old girl in America today? With the media onslaught that dictates sexiness and coolness the pressures of being a teen are greater than ever and it takes a teenager to tell it like it is in "Thirteen." Robin: First-time helmer Catherine Hardwicke teamed with then 13-year old Nikki Reed to write a comedy about being a teen girl in middle school. As the pair collaborated, Reed told what it is really like to be a kid caught up in the transitional world between childhood and being an adult. The result, "Thirteen," is far from comedy and is an intriguing, frightening look at America's youth. Tracy (Evan Rachel Wood) is a normal 13-year old girl in middle school, getting good grades and being a good kid. Evie Zamora (Nikki Reed), is also 13, but looks like she's going on 23 with her provocative dress and body piercing. Tracy is mesmerize by the school's number one hottie and tries to make friends, only to be snubbed. Tracy is persistent, though, and when Evie and her clique go on a shoplifting spree, her admirer does one better and steals a woman's purse. The girls go on a buying frenzy with the ill-gotten gain and Tracy begins her spiral down into a world she is ill prepared to cope with. "Thirteen" is a unique, modern day fable of growing up in new Millennium America where what used to be the rites of passage for 17 and 18-year olds are now the rituals of children just entering teen hood. Peer pressure, the need to fit in with the right clique, to be considered cool and sexy are all part of the passage, but so are alcohol, pot, cocaine (and worse), sex, self-abuse and other debasements. And all this happens to kids who are nowhere near mature enough to contend with this blast of change. Hell, few well-adjusted adults could handle it. What makes this tale of one girl's life at such a tumultuous cusp more than just an after-school special are the brilliantly conceived and acted character studies. Hardwicke and Reed have crafted a powerful story, focusing on Tracy, her mom, Melanie (Holly Hunter), and Evie. Tracy is ill-equipped for the changes that Evie propels her toward and Wood gives a remarkable performance in portraying her transition from good student/good daughter to a bad girl who thinks the world is hers and everyone else be damned. The young actress does an incredible job and makes the whole change believable - this is an Oscar caliber performance. Holly Hunter is no slouch herself as Melanie. She is divorced, dresses hair and struggles to keep her small family - Tracy and older brother Mason (Brady Corbet) and her menagerie - going, even raising chickens for the eggs. She is always battling with her ex-husband for money and gets zero help when the fecal matter hits the fan with Tracy's rebellion. Melanie doesn't know what to do with this person who used to be her sweet daughter and is not ready for the truth. In the end, she is still Tracy's mom and nothing can change that. Hunter will be remembered come year's end. Nikki Reed does double duty as scribe and co-star and, while she is not given the character arc of Tracy, does a superb job as an out-of-control teen who is conniving, sharp-witted and has a subtle air of evil about her as she pulls/pushes Tracy into the morass of growing up wrong. The rest of the supporting cast is solid in filling in the background. Jeremy Sisto, as Melanie's ex-druggie boyfriend Brady, plays a man who made mistakes in his life, paid the price and is trying to get back on his feet - and is disdained by the 'new' Tracy. Sisto's is a likable, honest character. Brady Corbet does a fine job as Tracy's better-adjusted brother who must watch his sister change into a creature that he cannot comprehend. Deborah Kara Unger, as Evie's guardian/cousin, is the picture of the distracted model/actress who goes through physical agony answering the dictates of her profession while totally botching her guardian responsibilities with Evie - blaming Tracy as the 'bad influence.' The hyper kinetic camera work by Elliot Davis, using different grains and color hues to evoke emotion, captures the fast-paced life of the teen rebels. Normally this MTV-style camera and editing - fast cuts and jerky camera - annoy me but in "Thirteen" it works perfectly as the film tells of Tracy's rapid, downward plunge into trouble. Cindy Evan's costume design runs the gamut from Tracy's innocence of t-shirts and sneakers to the Frederick's of Hollywood style of dress when she transforms into a Girl Culture girl. Production design by Carol Strober is particularly well done in creating Melanie's trying-to-make-ends-meet home. "Thirteen" hits as hard as Larry Clark's "Kids" but doesn't use the titillation factor to keep your interest. Instead Catherine Hardwicke provides a poignant, powerful look into a part of American life, the teen rite of passage, that is incredibly eye opening - and a little scary. It definitely does not make me want to come back as a 13-year old. I give it an A-.

Tracy (Evan Rachel Wood, "Practical Magic") is a nice girl who lives with her divorced, recovering substance abusing mother Melanie (Holly Hunter, "Moonlight Mile") and older brother Mason (Brady Corbet), but the beginning of seventh grade brings on an itch to hang with the hottest girl in school, Evie (the film's cowriter Nikki Reed). But Evie is a needy manipulator who quickly brings Tracy on a downward spiral of behavior that's too hot to handle for a girl of "Thirteen." Art director Catherine Hardwicke makes her directorial debut cowriting with her then thirteen year old star Nikki Reed and the duo, plus stars Hunter and Wood, have created a searingly raw and accomplished piece of work. The film has already won a Jury and Directors prize at Sundance and recently took Best Actress (for Hunter) and the Silver Leopard at Locarno and there is no reason this small independent shouldn't be remembered come Oscar time. "Thirteen" is both a technical and artistic achievement. The film opens with a devious prologue. Tracy is front and center begging someone to hit her and hit her hard because she can't feel anything. She's giggling and the camera bobbles just enough to suggest that she may be straddling someone during sex play. When the camera goes to a two-shot, we see that Tracy is kneeling on her bed with Evie, huffing from an aerosol can. Then we're sent back in time via a '4 months earlier' title. Melanie is a youthful, cool mom who runs a slightly chaotic household which includes a hairdressing business. After Tracy deems her wardrobe 'over' (she's been dissed by the cooler chicks at school), Mel's very supportive, buying her daughter new dud's on a budget at a trendy outdoor fair. This catches Evie's attention, but Tracy is shocked to discover that the in clique shoplifts. Her need to belong is strong, though, and she takes advantage of a distracted businesswoman and lifts her wallet. Initiation over, Tracy's entered the club. Evie initiates Tracy into a world of boys (mostly black), drugs, alcohol, tattoos and piercings, all the while stroking Mel's ego and gaining her sympathy with tales of abuse and neglect. By the time Mel realizes she has a problem, Tracy is out of control. Hardwicke and Reed have fashioned a strong cautionary tale for both young teens AND their parents. The story they show, while shocking (there is, unlike "Kids" however, no explicit sex shown) is all too easy to believe. The ensemble cast is simply great. Evan Rachel Wood, previously seen only in little girl roles, here is a little girl made monster. This is a star-making tour de force, a Best Actress nomination worthy performance. Hunter is her equal, delivering a mother of much complexity, a woman who pays great attention to her kids but allows her own perceptions to see them with her hippy chick rose-colored glasses. Nikki Reed, who resembles a young Eva Mendes, is also strong as the too old for her years survivor who juggles flattery and lies to attain what she wants. Support is solid across the board with Jeremy Sisto ("Wrong Turn") playing damaged goods Brady, the ex-addict boyfriend Mel takes back in spite of Tracy's outrage. Corbet is good, horrified to see his sister taking the wrong path, trying to get through to clueless parents. Deborah Kara Unger ("The Salton Sea") is Evie's oblivious guardian, a zoned-out, zombified LA actress/model ('They cut off my ears!' she whispers to Mel in disbelief after plastic surgery, revealing the extent of damage she unwittingly allows for surface show). Kip Pardue ("The Rules of Attraction") has a significant small scene and "24's" Sarah Clarke adds to the general chaos that constitutes Mel's household as Birdie. Cinematographer Elliot Davis ("White Oleander") uses his camera to relay the emotions of the scene. When Mason physically confronts Tracy in the family's living room, Davis seesaws his camera and the room seems like a ship pitching in high seas. Later in the film, he once again makes us believe Tracy is addressing a sexual partner when she starts talking about marriage because of his camera's POV, only to reveal otherwise. Editor Nancy Richardson ("Why Do Fools Fall in Love?") should also be noted, as her cutting is essential to the film's jangly tone. Costume and makeup are essential as Tracy evolves from a pretty young girl to a tougher, older looking one, although placing former friend Noel in a tee shirt sporting a big-eyed doe was perhaps a bit overkill. "Thirteen" is about as real a piece of fiction that's come out this year.