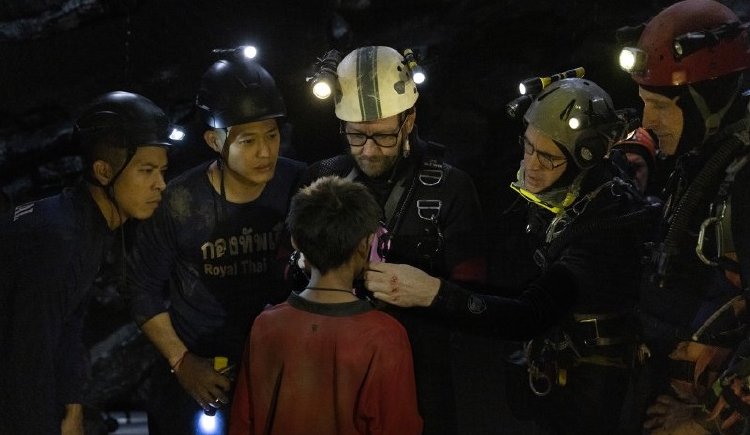 On June 23, 2018, the twelve members of Thailand’s Wild Boars youth football team went to visit the Tham Luang cave with Coach Chanthawong (James Teeradon Sahajak).  They were expected by Chai's mother (Pattrakorn Tungsupakul) at 7 p.m. to celebrate their youngest member’s birthday and when they hadn’t arrived by 7:30, worried parents went to pick them up in a downpour.  They found their bicycles, but not the boys, at the cave’s entrance, which was already flooding.  Within a matter of days, 10,000 volunteers had gathered from around the globe, including UK expert cave divers Rick Stanton (Viggo Mortensen) and John Volanthen (Colin Farrell), to try and save “Thirteen Lives.”

My pick for top documentary of 2021 was “The Rescue,” the harrowing account of this same story, one which truly impressed with humankind’s ability to accomplish the seemingly impossible.  So when I heard director Ron Howard ("Solo: A Star Wars Story," "Hillbilly Elegy"), whose output has been pretty uneven of late, was making a fictionalized feature version, my hopes weren’t exactly high – just how could he make a story which had already been told so expertly in a 2021 documentary worthwhile a mere year later?  The answer is surprisingly well, largely due to a well cast ensemble and production crew committed to realism.

When the film opens with the team, comprised of 11 to 16 year-olds, getting off the field, I thought Howard might be planning on focusing on the kids on the cave, something which “The Rescue” did not, but screenwriter William Nicholson ("Gladiator,” from a story by Don MacPherson's ("The Gunman")) mostly follows the documentary’s outline.  But as soon as we meet Colin Farrell’s John, the bespectacled actor in straight dad mode, calling Rick, Viggo Mortensen cast against type as a gruff, grizzled realist who immediately expresses a dislike for kids, things begin to get interesting.

Howard covers this huge rescue effort, which went on for over two weeks, from every angle.  Province Governor Naronsak (Sahajak Boonthanakit), ready to be offered up as a political scapegoat, rises to the occasion.  Navy SEAL Capt. Arnont Sureewong (Tui Thiraphat Sajakul) is caught between his own authority and that of British volunteer divers who have more expertise in the dangerously tight environs of the cave tunnels than his open sea divers (and must also deal with the loss of his best friend, Saman Kunan (Weir Sukollawat Kanarot), who comes in to help with the operation).  The parents hold vigil, calling in religious figures which Rick looks askance at.  Thanet Natisri (Nophand “Aon” Boonyai), a water engineer, just shows up with a bunch of local volunteers to redirect water away from the mountain.  Local rice farmers agree to let their fields be flooded.  Something like a small town pops up in the monsoon to support the effort with food and supplies.  Worldwide media arrives and needs to be policed.

The filmmaker avoids heavy handedness, allowing the seriousness of the situation to sink in slowly.  When, after having gotten deep into the cave without finding the boys, Rick and John find a stranded worker on a ‘beach,’ the man panics so badly being brought out underwater, he almost drowns himself and his rescuer.  No one voices how much more difficult this will be with twelve children until much later.  It’s Rick who comes up with an unconventional and untested idea, one they don’t put to their fellow diver, Australian anesthesiologist Dr. Richard “Harry” Harris (Joel Edgerton), until he arrives at the scene and his immediate reaction is to shut it down because of its risky nature.  The emotional burden put upon these men is enormous and, ironically, it becomes even heavier after their initial success.  When their youngest, Chris Jewell (Tom Bateman), loses his grip on the guiding line and follows a different cable to an offshoot location with one of the boys, fellow rescue diver Jason Mallinson (Paul Gleeson) is as careful with Chris’s psyche as he is with their precious cargo.  On the other side of the coin, the coach who keeps the boys’ spirits up and their fears at bay by teaching them meditation, is overwhelmed by being thanked by parents he’d expected to blame him.

Director of Photography Sayombhu Mukdeeprom ("Call Me by Your Name") and underwater DP Simon Christidis give us every perspective, from the distant profile of the mountain known as a sleeping princess to approaching underwater stalactites like swimming into a toothy maw.  Production designer Molly Hughes ("I'm Thinking of Ending Things") has done a remarkable job recreating the cave’s interiors.

It is unfortunate that Amazon, which acquired this title with its purchase of MGM, is only opening the film in theaters in three cities as it truly deserves to be seen on a big screen.  While “Thirteen Lives” doesn’t provide the constant adrenaline rush of “The Rescue,” it is easily Howard’s best film since 2011’s “Rush.”

In 2018, the entire world held its breath when 12 young Thai soccer players and their coach were trapped in an underground cave system they were exploring (for fun) when it was suddenly flooded by early monsoon rains. Director Ron Howard and his team tell the boys’ and their rescuers’ stories in “Thirteen Lives.”

There was a documentary film from 2021 called “The Rescue” about the Tham Luang cave rescue and it was, hands down, the best documentary of the year. I am claustrophobic by nature so I made myself watch the gut-clenching true life story and I am glad I did. As such, I had a great deal of skepticism as to why make a feature when the doc did the job and told the story so well.

I girded my loins and sat down to watch “Thirteen Lives” and, while I did not have the physical, visceral reaction I had a year ago. Ron Howard and his talented team do a first rate job in telling the story completely and from start to finish.

Unlike the documentary, which held me at the edge of my seat, Howard’s work is more of a nuts and bolts procedural of what happened and the enormous international rescue effort that it spawned. The story, while it does give an honest portrayal of the sheer scale of the mission, concentrates mainly on the four master cave divers who volunteered to lead the rescue – Rick Stanton (Viggo Mortensen), John Volanthen (Colin Farrell), Dr. Harry Harris (Joel Edgerton) and Chris Jewell (Tom Bateman).

Normally, I think that a nearly 2½ hour long film would have more characters than the above rescuers and there are. But, the story, by William Nicholson and Don MacPherson, and attention to the many details of the rescue means that only a few characters get full shrift, like Saman Kunan (Sukollawat Kanarot), the former Thai Navy SEAL who gave his life in the rescue. But that is OK.

For those uninitiated to the harrowing true story – and, I learned, there are some – you get all of the tension, dangers and trials these brave men endured to save all 13 lives. But, to me, “The Rescue,” which really puts you in the dark, cramped caves with these heroes who would not take no for an answer, takes the prize. But, Howard and his cast and crew tell the boys’ rescue tale with assurance – and the happy ending does not hurt.