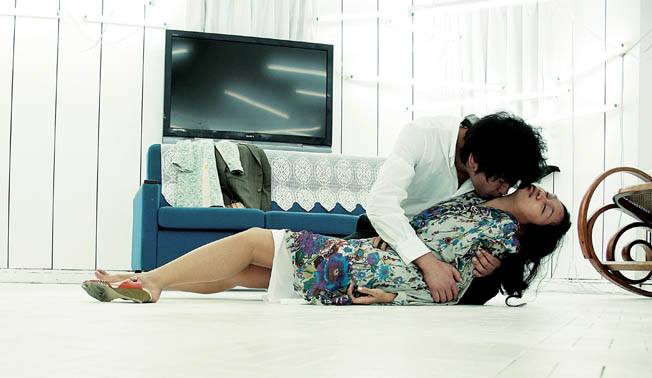 Father Sang-hyeon (Kang-ho Song, "The Host") is so troubled by the victims of a leper-like disease that he volunteers for a vaccine experiment, but when he succumbs he is given a blood transfusion. The transfusion appears to help, but the blood was infected, and Sang suddenly finds that he has an overpowering and sinful "Thirst."

Cowriter (with "Sympathy for Lady Vengeance's" Seo-Gyeong Jeong)/director Chan-wook Park ("Old Boy") has a field day tossing several genres into a blender to concoct his deliriously wacky, erotic, comedic and gory twist on the vampire tale. Largely adapted from Émile Zola's 1867 nonvampiric novel Thérèse Raquin, Chan-wook Park folds in Father Damien, the leper priest of Molokai, and "Near Dark's" transfusion plot line turned inside out. Korean superstar Kang-ho Song has great physicality as the tormented priest, but it is former beauty pageant winner Ok-vin Kim, as his married lover Tae-joo, who really gets to sink her fangs into her role. We can deduce some of Chan-wook's agenda early on with a fat, ailing hospitalized character whose deathbed tale of having given a sponge cake to two starving girls thirty years prior represents gluttony as well as a humorous bid for redemption. Even Sang's senior advisor, Father Noh (In-hwan Park, "The Quiet Family"), skates on thin ice as he asks for blood to cure his blindness. But it is the family that befriended Sang as an orphan who bears the brunt of his transformation. Old friend Kang-woo (Ha-kyun Shin, "JSA: Joint Security Area," "Save the Green Planet!"), a cretinous sickly momma's boy, 'was always bringing strays home,' relates Mrs. Ra (Hae-sook Kim) as she simpers at Sang over her mahjong table. Kang-woo remembers how Sang touched his now-wife Tae-joo's feet because of her calluses and how she ran away (Chan-wook's foot fetishism here gives a whole new slant to the Catholic ritual of the washing of the feet). Tae-joo, brought up as Kang-woo's stepsister when her mother abandoned her with Mrs. Ra, is essentially an indentured servant wed to a man she cannot stand who 'escapes' her dreary existence by running barefoot in the middle of the night. When Sang spies her one night, he gives her his shoes. When she presents him with a new pair in Mrs. Ra's fabric shop, they can no longer keep their hands off one another. When Sang sees scratches and bruises on Tae-joo's inner upper thighs, he is unaware he caused them and thinks Kang-woo is abusing her, a notion Tae-joo does nothing to dissuade him of, and so, eventually the two turn to murder for reasons other than feeding. Even though it is spawned from other works, including Chan-wook's own, "Thirst" is one of the most original takes on vampire lore ever. The film is creepy (Tae-joo 'stabs' her husband in the throat with a pair of clippers as he snores without ever making contact), gory (a fishhook caught in an earring recalls fellow Korean Kim Ki-Duk's excruciating "The Isle"), very funny (when Sang blanches, saying he smells blood, Tae-Joo runs from the room to retrieve a sanitary napkin), slapstick (Mrs. Ka's eye movements once she is paralyzed), erotic (Sang and Tae-Joo's first real lovemaking begins with a lot of toe sucking) and moral (Mrs. Ka, shocked into shut-in syndrome, remains a witness to Sang and Tae-joo's horrific deeds). The film is art produced to the nth degree, the priest's early monklike setting reappearing when Mrs. Ka's overstuffed apartment is painted entirely white to ape the sunlight Tae-joo can no longer experience. Sang's recorder playing is reflected in the film's woodwind score, just as the script features many parallels (Sang beats his thighs to resist sexual temptation and the marks appear on Jae-doo). Kang-ho Song is handsome and soulful in the lead role, his movements becoming more animalistic once he becomes a bloodsucker. Ok-vin Kim mutates from Cinderella drudge to erotic temptress to lusty killer, a vampire with no conscience whom Sang seeks to temper. Ha-kyun Shin gets the puling, slightly idiotic, spoiled son who treats Jae-doo with selfish entitlement just right. He's particularly comical returning from his drowning death (shades of dripping Hideo Nakata J-horror!) as a reminder of Sang and Jae-doo's sin. Hae-sook Kim is insufferably smug as Mrs. Ra, then almost engenders sympathy as she frantically tries to communicate with her eyes and one finger post-stroke (she's also funny, reminiscent of "Kung Fu Hustle's overbearing landlady). This Cannes 2009 Jury Prize winner isn't perfect - it is a little overlong and sometimes Sang's actions don't jibe with what we've been given as his motivations - but it's always surprising, always beautiful to behold and often, very, very funny.