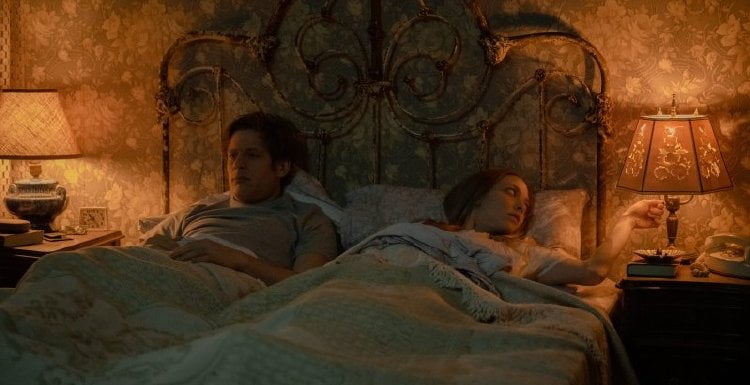 When George Clare (James Norton, "Mr. Jones") snags a position at Saginaw College after completing his PhD, it doesn’t appear that his wife Catherine’s (Amanda Seyfried) prestigious job as an art restorer in NYC is given a second thought and when he finds the ‘perfect house’ in the Hudson Valley, she supports that decision as well.  But when Catherine finds an old ring embedded in a kitchen windowsill and starts looking into the home’s history, she’ll discover the first disturbing secret George has kept from her in “Things Heard & Seen.”

After making a splash with 2003’s “American Splendor,” writer/directors Shari Springer Berman and Robert Pulcini have had a very uneven track record.  Their latest, adapted from Elizabeth Brundage's 'All Things Cease to Appear,' sounds much like last year’s “The Nest,” but it’s more of a Frankenstein film, stitched together with elements recalling Nicholas Roeg’s “Don’t Look Now,” the Gene Tierney noir “Leave Her to Heaven” and several others without evincing the clarity or quality of any of them.  Seyfried engenders sympathy and a rooting interest that carries us through a film whose supernatural aspects almost feel like an afterthought and which carries its subplots a bridge too far.

A prologue hints at dire things to come, George noting blood dripping from the ceiling, his and Catherine’s young daughter Franny (Ana Sophia Heger, TV's 'Life in Pieces') standing on a couch, but the first hints in the present that things are not what they seem are much subtler (like the Vayle’s Dairy ‘ghost sign’ on the side of their barn).  While making love, Catherine suddenly freezes, intent on an overpowering odor of car exhaust fumes.  The sudden movement of a rocking chair sends Franny screaming into her parents’ room (where she is welcomed by Catherine but resented by George).  We see the faint image of a woman (Elliot Frances Flynn) in the shadows, one who emerges as ‘spirit waves’ when Catherine dislodges that ring.

In the interim, George seems a bit suspicious of Eddy (Alex Neustaedter) and Cole Lucks (Jack Gore), the brothers who offer their all around services to Catherine, while showing altogether too much interest in Eddy’s cousin Willis (Natalia Dyer, "Yes, God, Yes").  He disappoints his artist wife by moving the series of small nautical paintings of his she’s always loved to his work office.  George is none too pleased when Catherine forms a friendship with his colleague’s wife, Justine ('Better Call Saul's' Rhea Seehorn), an innovative local weaver.  When Catherine traces her new home’s history to the Smit family, it’s George’s boss, Floyd DeBeers (F. Murray Abraham), who suggests a séance, but it will be what Floyd stumbles upon in the physical world that will prove far more dangerous.

In addition to those already noted, the film features "Raiders of the Lost Ark's" Karen Allen, Michael O’Keefe and “American Splendor’s” James Urbaniak, but Seehorn excepted, few stand out in the large ensemble.  “Things Heard & Seen” would have benefitted from an all around paring down, its romantic side plots particularly problematic.  The Clare marriage is never grounded enough to begin with, George’s behavior questionable from the very beginning, Norton’s performance deficient of charm.  “Things Heard & Seen” is a movie-of-the-week thriller gussied up with a theatrical cast and production.