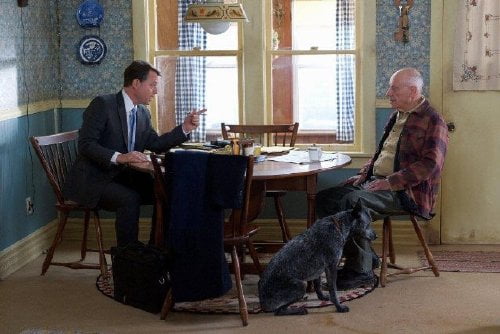 Mickey Prohaska (Greg Kinnear) is an insurance agent living and working in the wild land of Wisconsin. He thinks he is an uber salesman but, really, is having a tough time making ends meet. When his new partner, Bob (David Harbour), comes to Mickey with an insurance prospect - elderly farmer Gorvy Hauer (Alan Arkin) - he sees dollar signs when he finds a vintage violin that the old man does not even know he owns in “Thin Ice.”

Mickey Prohaska's (Greg Kinnear, "Flash of Genius") small Wisconsin insurance business has a cash flow problem, so when he meets the guileless Bob Egan (David Harbour, "Revolutionary Road," TV's 'Pan Am') at a convention he offers the guy a commission hike to hijack his prospects. Chiefly, that's slightly senile farmer Gorvy Hauer (Alan Arkin, "Thirteen Conversations About One Thing") who proves worth more than policy possibilities when Mickey spies the estimate for a valuable violin Gorvy hardly remembers owning. But when the slick spinster steps over the line into outright theft, he finds himself on very "Thin Ice." Writer sisters Karen and Jill (who also directs) Sprecher ("Thirteen Conversations About One Thing") look to the "Fargo" playbook for their twisty modern noir, and while much of it feels awfully familiar, a great cast and third act twist raise it above similar wannabes ("The Ice Harvest"). Billy Crudup has received much notice for his psychopathic turn as ex-con locksmith Randy (Billy Crudup, "Watchmen," "Public Enemies"), and he is demented fun, but it's Arkin, wonderfully supported by a cattle dog named Petey, who gives this film its weird and wacky heart. Kinnear's glib salesman is, of course, the focal character, and it is to his and the screenwriters' credit that Mickey retains a rooting interest even after he's shown how low he's willing to go. Kinnear gives the guy a sheen of success that hides the everyday panic only witnessed by his abused secretary Karla Gruenke (Michelle Arthur, "The Number 23"). It's just hard not to side with someone who never catches a break. Even at the onset, Mickey's cornered by a drunk conventioneer, Sherri (Jennifer M. Edwards, "The Straight Story"), who comes on then steals his wallet. Bob comes to the rescue with a cash handout and return address, earning Mickey's interest. Gorvy is a doddering old man living in a modest ranch, possessions piled everywhere, and Mickey has no problem over selling the guy. But a $25,000 estimate on an old violin is too much temptation, even when Mickey's forced to include Randy, the guy installing a security system at the Hauer home, into plot. Unfortunately Randy immediately ups the ante on Mickey's crime when he bashes in the head of a suspicious neighbor. Corpse disposal is only the start of Prohaska's problems, though, when violin expert Leonard Dahl (Bob Balaban, "A Mighty Wind") gets a second opinion and the instrument turns out to be worth fifty times his original estimate. In addition to their twisty plotting, the Sprecher sisters sprinkle their tale with great throwaway lines ('There's only two seasons here - winter and roadworks'), running gags (Gorvy's disconnected TV) and clever subplotting (Mickey's 'promotion' of Karla to office accountant) that return with interest, but when they attempt back story, the film stalls. Mickey's separation from his wife Jo Ann (Lea Thompson, "Back to the Future," "J. Edgar") adds to the character's desperation, but visits home do nothing for pacing or plot. The wintery small town landscape with its ice fishing and power tools feel so familiar one cannot help but wonder how much fresher this might feel had the setting been shifted south. Even Jeff Danna's ("The Imaginarium of Doctor Parnassus") score, which of course utilizes violin, feels like a light rejoinder to Carter Burwell's doom laden "Fargo" strings. The film's art direction does get the plain, slightly worn feel of old homes, nondescript hotels and featureless office parks, but although the deep teal of Mickey's office looks great on film, the color's way too outre for Racine. "Thin Ice" may feel cribbed from other films, but it has enough cards up its sleeve to keep one laughing in disbelief. And at the way Arkin's Gorvy says 'doggie.'

Things are not what they seem as Mickey schemes to cheat poor old Gorvy out of his violin that is apparently worth $30000. He plans to sneak into the house when the old man is not there and switch the instrument with a cheap copy. This is thwarted when Mickey drops by to see Gorvy and finds that a security alarm system is being installed by Randy (Billy Crudup). Plans have to change and, as you might guess, they are destined to spiral out of control. The neat thing about “Thin Ice” is Mickey’s spiral down does not follow any predictable direction and I was pleasantly surprised that I was kept guessing how the twists and turns would go. It helps that the veteran cast – Kinnear, Arkin, Crudup, Bob Balaban, Lea Thompson - and the rest give life to their characters. The story, by director Jill Sprecher and Karen Sprecher, has the requisite twists and turns of a good whodunit and entertains right to the end.