They Came Back (Les Revenants) 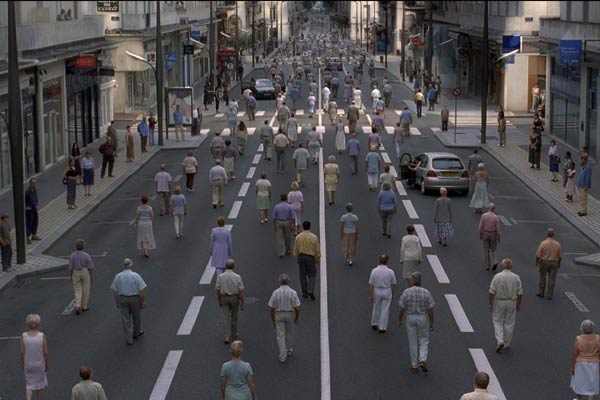 One day the inhabitants of an average French town find their population has increased by thirteen thousand people. But these are all people they know, people who have lived in this town before, people who have died over the past ten years. "They Came Back."

This is the feature directorial debut of Robin Campillo, Laurent Cantet's cowriter and editor on the masterful "Time Out," but where that film's rather common premise - the paralysis wrought by the demands of the working world - was used to moving artistic ends, this film's engagingly original premise allows for some probing social exploration but ultimately fails to draw any real conclusions. Still, until it trails off into the ether at the end, "They Came Back" is a pretty interesting study. Unlike "The Monkey's Paw," we witness no one in this provincial French town wishing for the return of their loved ones, just their varied responses to the event which opens the film. As thousands shuffle down the city streets (all showing no signs of trauma, disease or decomposition), the town's mayor (Victor Garrivier, "Les Destinées," "Crimson Rivers 2") presides over an emergency meeting and press conference to decide how to handle the influx. His right-hand man, Isham (Djemel Barek, "Munich"), races off to join his wife Véronique (Marie Matheron, "Le Grand chemin") in a quest to find their seven year old son, Sylvain (Saady Delas), at the holding center, but the mayor himself looks wary as leaves the task of attending to his wife, Martha (Catherine Samie, "Le Divorce"), waving from the street below, to their children. Campillo and cowriter Brigitte Tijou follow these two stories in addition to a third, more prominent thread involving hospital worker Rachel (Géraldine Pailhas, "L'Adversaire," "5x2"), who has no plans to collect her young husband Mathieu (Jonathan Zaccaï, "The Beat That My Heart Skipped"). He finds her, however, and simply follows her home on foot one night. She makes love to him as her colleague and his doctor, Gardet (Frédéric Pierrot, "Artemisia," "Monsieur N.") observes with a night scope. While at first the dead are treated like refugees with the rights to return to their families and their jobs, their strange behavior turns the tide and the living begin treating them like second class citizens. They are 5 degrees cooler than the living, who put them under surveillance and discover that they all, even the eldest, walk fifteen kilometers a day towards a meeting place at night. They are drugged to slow down, like mental patients. Their vacant behavior is diagnosed as copying the living and replaying from memory (one can observe that Martha, who as the eldest returnee has the most memories, shows the greatest spark of life whereas Sylvain is little but walking doll who creeps out his classmates), their comprehension of word patterns failing when put into unfamiliar configurations. Mathieu, reintegrated in his job as an architect, deliver plans which his superiors interpret as nonsensical, and so he is downgraded to manual labor. But his plans are at the heart of the night wanderings - those who have returned immediately focus on returning from whence they came. Campillo achieves a spooky tone without ever making one feel the living are in danger. There's a hushed quality to the film, as if experiencing everything through a filter or fog, perhaps the point of view of those who have come back. Original music by Jocelyn Pook ("Time Out," "Gangs of New York") and Martin Wheeler supports the out of kilter, almost under water feel. The whole slo-mo build keeps one in its spell, but when the film concludes, we have no understanding of what drove the dead to come back, only how they were received.

The dead, at least those who have been deceased for less than ten years, are back. These new-age zombies don’t want to eat the flesh of the living, though, they just want their old lives back. But, the returnees are not quite alive and their agenda is not understood as they try to reintegrate into a world no longer theirs in “They Came Back.” Even though this is, at least on the surface, a zombie” movie, don’t expect to have the thrills and chills of George A. Romero’s “Night of the Living Dead.” There are no dead-eyed flesh-eaters lumbering around the countryside looking for a grisly morsel or two among the living. Instead, director and co-scripter Robin Campillo (sharing writing credits with Brigitte Tijou), comes up with a truly original spin on the old zombie story. One day, the recently deceased emerge from cemeteries from all over the land and begin their walk back to the land of the living. Campillo makes no effort to tell us why they have risen from the dead (never mind that they return in physically pristine condition – no mean feat for someone buried for up to ten years). But, this doesn’t matter as she lays out a world where the dead return in a benign, but still very creepy, way. They Came Back” leaves you with far more questions than it answers but the atmospheric look and feel of the film leaves a lasting impression anyway. It focuses on three of the returnees – a young husband, an elderly wife and a child – showing the confusion that their loved ones have with their sudden arrival. These personal stories are mixed with the socio-political ramifications that such a return would have on society as the government tries to get to the bottom of the mystery. And that’s what “They Came Back” is – a mystery, not a horror film. So, if you want to go see a film where mutant zombies pillage the countryside looking for victims, go elsewhere. (I would suggest Romero’s “Night…” as an excellent place to start.) But, if you are looking for an intelligent, well-crafted and creepy story (without violence) then “They Came Back” is for you. It’s an original in a genre done to death (pun intended).