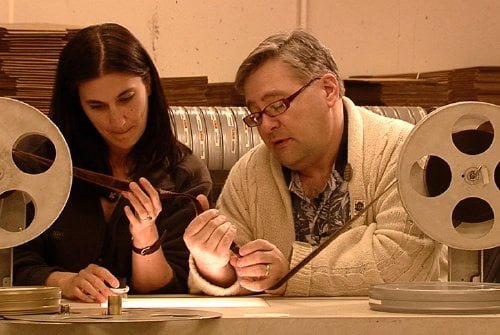 In 1986, Ted Turner, the owner of the MGM film catalog, decided to take classic black and white movies and colorize them. The hue and cry from those passionate about film preservation caused the formation of the National Film Registry in the Library of Congress. Starting in 1989, the Registry began selecting 25 celluloid marvels to save and preserve each year. At 525 films and growing, filmmakers Paul Mariano and Kurt Norton tell us the story of “These Amazing Shadows.”

Back in 1986 when Ted Turner decided to colorize black and white movies to broadcast on his television channel, outraged filmmakers and stars like Jimmy Stewart went to Washington D.C. to demand that their artistic legacies be preserved. Three years later, the Library of Congress nominated the first group of twenty-five films to be listed in the National Film Registry. The films themselves, and many more besides, are stored at the Nitrate Film Vaults on the Packer Campus where George R. Willeman still looks for treasures among "These Amazing Shadows." Writer/directors Paul Mariano and Kurt Norton provide the raison d'être for the National Film Registry, formed to archive films its board finds 'culturally, historically and aesthetically significant, while also entertaining film lovers with anecdotes and clips. It's ironic that the Ted Turner colorization outcry led to the formation of the Registry, as "These Amazing Shadows" feels just like a TCM commissioned documentary. We hear from filmmakers like Wayne Wang describing how "West Side Story" became his idea of America and from Gregory Peck's son on his father's iconic role in "To Kill a Mockingbird." Former Boston Globe critic Jay Carr, who served on the board for 10 years, tells us about Cologne, an amateur film made about a German American community in Minnesota in the early 1930's, chosen because it documents a slice of regional history. Not every film chosen is "Citizen Kane" - although many of the expected classics have been entered, films from a concession stand ad to Michael Jackson's 'Thriller' video to the Zapruder film have met the criteria. John Waters pops up often and is the perfect choice to discuss the 'unexpected' films to have made it, like "The Rocky Horror Picture Show" and "Blazing Saddles." 'Star Trek's' George Takei, a former Japanese internment camp resident, discusses the illegally shot 'Topaz,' intended as a home movie, now a document of life within. Films are discussed in groups - directed by women, animations, documentaries, experimental, etc. Quite a bit of time is spent with Willeman and one of his archivists, Liz Stanley. We hear the usual statistics about how 1/2 of all films made before 1950 have been lost, but we also see the state of some of these prints. It may be surprising to learn that some of the biggest, most popular films, like "The Godfather," are most in need of restoration because of having had so many prints struck from the negative. The painstaking work, looking through horribly deteriorated film, sometimes yields surprises. Willeman was over the moon to discover that one of the reels stored contained the uncensored version of "Baby Face" - we see both versions side by side and the difference in tone is astonishing. "These Amazing Shadows" employs no out of the ordinary filmmaking itself, but it does make for a delightful journey, listening to Rob Reiner or Debbie Reynolds and seeing clips in their proper aspect ratios. Film preservation is an important part of our culture and the documentary details exactly why that is. They also let us know that we can nominate films ourselves - just email Donna Ross at dross@loc.gov. I've already stated my case for Tobe Hooper's "The Texas Chainsaw Massacre." "These Amazing Shadows" will be shown as a kickoff of the 2011 Coolidge Award - to film preservation - then begin a run at the Coolidge Corner on May 20.