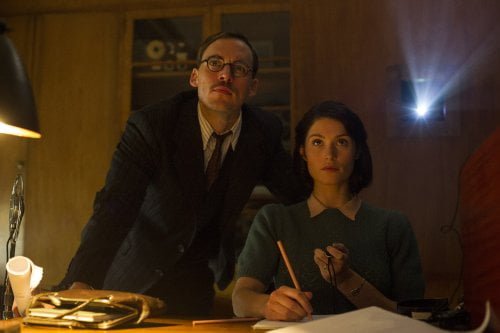 Catrin Cole (Gemma Arterton) applies for a job at the Ministry of Information’s film department as a secretary. To her surprise, the job is as a scriptwriter for “informationals,” short films for civilians on coping with the Nazi Blitz of London. She finds a niche, providing the woman’s point of view in the propaganda films that are mandated to be “authentic and optimistic” in “Their Finest.”

As bombs fall during the London Blitz, Catrin Cole (Gemma Arterton, "Hansel & Gretel: Witch Hunters") gets a new job writing 'slop' (female dialogue) for the Department of Information's film division. After a run in with faded matinee idol Ambrose Hilliard (Bill Nighy), she's recruited by screenwriter Tom Buckley (Sam Claflin, "Me Before You") to work on a feature film aimed at boosting wartime morale with 'authenticity and optimism' in "Their Finest." This love letter to cinema's unifying and inspiring power is a love story, a workplace comedy and a celebration of the human spirit. Adapted from Lissa Evans' novel by Gaby Chiappe (Netflix's 'Shetland') and directed by Lone Scherfig ("An Education"), the female centric film also illustrates how women began to find their places outside the home at a time when sexism ran rampant. "Their Finest" accomplishes all this and features what may possibly be the most unexpected on screen death since Hitchcock's "Psycho." Catrin's supporting her artist boyfriend Ellis Cole (Jack Huston, HBO's 'Boardwalk Empire'), having followed him to London from Wales, now living together in a sham marriage. Joining Tom and Raymond Parfitt (Paul Ritter, "Quantum of Solace") in a cramped writers' room, Catrin comes across a newspaper article lauding two sisters, Lily and Rose Starling (Lily and Francesca Knight), who took their father's boat out to aid in the evacuation of Dunkirk. This has all the earmarks they are looking for, but when Catrin travels to interview the women she discovers it's not entirely true, the boat motor having seized halfway to their destination, their rescuees having been offloaded from the more crowded boat that towed them back. Forging ahead with 'The Nancy Starling' anyway, the truth gets more muddied by government interference which the writers must work around while staying true to their story. Catrin's resolve that the women remain the film's heroic center is her own, personal mission. The film tackles a lot without short shrifting anything. We are constantly reminded of the horrors of the Blitz, Catrin caught outside a building when it's hit, staggering up through the wreckage to the sight of scattered bodies, then laughing at the realization that they are store mannequins. Then she spies the shop's owner. Later in the film, she spends an evening writing, returning to a home that no longer exists and a shooting day where crew and equipment remain unknown variables. Catrin and Tom's working relationship evolves from sexist remarks and verbal sparring in the office to mutual respect and love on location in Norfolk. When the Secretary of War (Jeremy Irons) demands they include an American in their story where none were present, real life hero Carl Lundbeck (Jake Lacy, "Carol") is recruited, but his acting talent is nonexistent. Catrin comes to the rescue, flattering Hilliard, who's reluctantly taken the role of Uncle Frank, to coach the young man. The period production should be nostalgic for anyone who lived through the time period, all peeling, faded wallpaper and make do. The film sets charm as well with cast and crew lining up to use their location inn's single bathroom, 'Dunkirk' painted on glass to appear on the beach in the camera's lens. Arterton charts the growth of a young woman who learns how to get what she wants by strategically employing her talents. Claflin is just grating enough to spark friction with the woman he comes to respect and love. The two actors form a realistic bond in their world of artifice. But theirs are not the only stories told here, Nighy affecting and amusing as the aging thespian who suffers the heartbreak of losing his oldest friend and agent (Eddie Marsan), only to find himself in the hands of Sammy's more practical and demanding sister Sophie (Helen McCrory, "Skyfall"). Rachael Stirling ("Salmon Fishing in the Yemen") is outstanding as Phyl Moore, the red-headed, lesbian Ministry go-between eyed with suspicion by Tom and as an ally by Catrin. The film also stars Richard E. Grant as their boss, Roger Swain. If the film has a weak point, it is Ellis Cole, more love story obstacle than character of interest, but Chiappe's script is otherwise so deft it's a minor quibble. Scherfig wraps up her sprawling yarn with Catrin in a theater audience, reacting to the film she's helped create and the reactions all around her, inspired to forge ahead by the words she herself has written. This cast and crew have given us "Their Finest." Grade:

I have been trying to think of another movie that deals with making propaganda films for the Allies during World War II. The best I could come up with is “The Americanization of Emily (1964).” But, that movie was not “about” making a feature length propaganda film to inspire the masses to fight on. That is just what “Their Finest” is about. Catrin works for Tom Buckley (Sam Claflin), the head writer charged with coming up with a script that will put a positive spin on the horrific military debacle at Dunkirk, where over 300000 soldiers need to be evacuated. That heroic rescue involved hundreds, if not thousands, of civilians in their tiny boats who brought the troops home. Catrin comes across a news story about twin sisters who risked their lives to take part in bringing the boys home safely. A project like this should write itself but Catrin learns, after interviewing the twins, Rose and Lily Starling (Lily and Francesca Knight), the never even made it – their motor broke down. This turn of events should have meant the end of the film, named “Dunkirk.” That does not deter the pompous Minister of Information (Jeremy Irons), who pushes the project forward, damn the facts. Director Lone Scherfig and screenwriter Gaby Chiappe adapt the novel (Their Finest Hour and a Half) by Lisa Evan. Doing so, they create a charming, often, in equal parts, funny and tragic, story about surviving, even thriving, during dangerous times. “Their Finest” is also a propaganda film in its own right, dealing with issues like equal pay for women and the struggle of older workers (here in the guise of Ambrose Hilliard (Bill Nyhy) who continues to get acting jobs only because the young men are away at the front). Gemma Arterton is first among equals in this well made ensemble movie that gives equal light to each in the large cast. Bill Nyhy is marvelous as the aging thesp, Ambrose, giving nuance and depth to a character that could have been a two-dimensional buffoon. Tom Claflin gives a solid performance as Catrin’s boss and, if you did not guess early in the film, is secretly in love with her. Danny Huston, as Catrin’s “husband,” injured during the Spanish Civil War, is a struggling, unemployed propaganda artist who resents her being the wage earner of the family. (Again, a subject that can ring just as true now as then.) The rest of the cast get fair shrift, too. The heart of “Their Finest,” of course, is the making of the propaganda film that will fulfill the goal to be “authentic and optimistic,” even if it is all a fabrication to soothe the masses to endure the war. This is what gets you interested and keeps you there until the end.