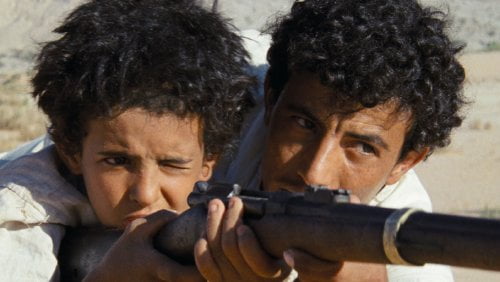 In 1916, a young Bedouin boy is raised by his brother Hussein (Hussein Salameh Al-Sweilhiyeen) while the wise words of his late father, the Sheik, to offer hospitality per Bedouin law and stay on the right side of right, chart his course. When an English officer (Jack Fox) and his guide (Marji Audeh) arrive seeking an escort to an old well in dicey territory on the road to Mecca, Hussein leads them off, but his younger brother follows. Events will see the boy live up to the name given him, "Theeb (Wolf)."

Jordan's submission for the Foreign Language Oscar is a timeless coming of age tale, young Jacir Eid Al-Hwietat a captivating presence amidst the stunning austerity of the desert landscape (cinematography by Wolfgang Thaler, Ulrich Seidl's "Paradise" trilogy). Cowriter (with Bassel Ghandour)/director Naji Abu Nowar uses the Western genre for his classic tale, the ghosts of "Lawrence of Arabia" flitting about on his horizons. No sooner have we observed Theeb happy in his environs, the words of his father setting his course, than an English soldier and his guide appear. Theeb has never seen anything like the blond Englishman, but he's scolded for his curiosity about the wooden box among the man's possessions. As the two rest, their hosts advising on the dangers of their destination, young Theeb is taught by Hussein how to shoot. That evening, he's instructed to kill a goat for their meal. But when their eldest brother instructs Hussein to lead their guests on the Pilgrim's Trail, Theeb is told to stay behind. He doesn't listen. When once again Theeb investigates the Englishman's cargo, he receives a physical rebuke, one which angers Hussein. But soon the men have more to worry about when they are beset by thieves and Theeb must survive using all he's learned. The story is classic Western - strangers led by locals through a dangerous pass are challenged by outlaws - but the tale is kept fresh with the exotic setting and sure-handed direction. Jacir Eid Al-Hwietat, with his soulful eyes and shock of corkscrewed hair, has real screen presence. He has a natural way with Salameh Al-Sweilhiyeen, their brotherly affection palpable, but the young actor is challenged more working with Hassan Mutlag Al-Maraiyeh, the opponent with whom he becomes mutually dependent, a not necessarily bad man forced by circumstance into doing bad things. Much is foretold by Thaler's use of light and space, Salameh Al-Sweilhiyeen disappearing into the landscape not once, but twice, rock formations forming passages into the unknown. The screenplay, although simple on its surface, uses history and Bedouin culture as provocative undercurrents. 'The strong eat the weak,' Theeb's father tells him, but Abu Nowar keeps us guessing just who is whom until the end. Grade: