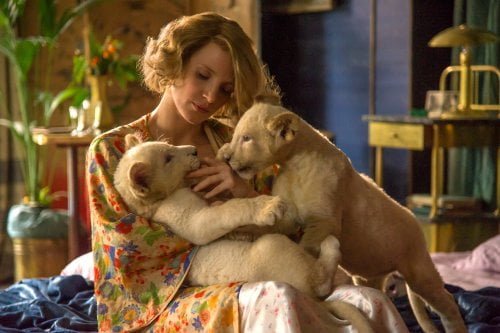 Jan and Antonina Zabinski (Jan Heldenbergh and Jessica Chastain) ran the Warsaw Zoo. On the day the Germans invaded Poland in September, 1939, many of the animals were killed in the bombing or taken by the Nazis to Germany. The Zabinski’s kept the zoo in operation during the remainder of the war, officially and not so, and used their will and their wiles to save over 300 Jews from the Holocaust in “The Zookeeper’s Wife.”

Laura finds nothing particularly wrong with "The Zookeeper's Wife," enjoying its little known piece of WWII history, but she didn't find it particularly memorable either.

The past year has been rife with films that reveal some little- or un-known story of our history. “Hidden Figures,” “Loving” and “Land of Mine” were three such stories and is joined by the adaptation of the non-fiction book by Diane Ackerman with director Niki Caro and writer Angela Workman. The day before the surprise invasion by the Nazis is just another for Antonina and the residents of the Warsaw Zoo. She rides around the zoo on her bicycle accompanied by a baby camel named Adam. She greets the visitors and overseas the care and feeding of her animal wards. Then, in September of 1939, the Nazis invaded Poland and the zoo, like all of Warsaw, is ruthlessly bombed repeatedly, killing many animals and causing other to escape into the ravaged city. Then, the Germans, in the guise of zoologist Lutz Heck (Daniel Bruhl), arrive to take the best of the zoo’s breeds and bring them to Berlin. The rest of the animals are slaughtered by the German soldiers. The zoo, in turn, is converted into a pig farm to feed the Nazi occupiers. At the same time, the Jews of the city are forced into a ghetto that grew in population to hundreds of thousands. The fate of these inhabitants is well known. But, the now vacant basement cages would be a perfect hiding place. Antonina and husband Jan, the zoo’s curator, hatch a plan to spirit as many Jews as possible from the ghetto, hide them and help them escape Nazi persecution. This little-know story is given straightforward cinematic treatment by the filmmakers. Costume (Chastain is a clothes horse for the fashion of the period) and production design both set the stage convincingly for the incredible tale. The variety of zoo animals and Antonina’s loving care for them sets the viewer’s empathy, especially for the little camel, Adam. The stars of the film all give solid performances. Chastain is convincing as the strong, compassionate woman to who life, whether man or beast, is sacred. Johan Haldenbergh is equally strong-willed and no less passionate, but in a subtle way as he fools the Nazis, taking those certain to die to safety. Daniel Bruhl, even when wearing an SS uniform, displays Heck’s intellect and equal passion for animals, if not man. Heck makes for an interesting point on the triangle of the three characters, in more ways than the obvious one. “The Zookeeper’s Wife” may have appeal to history buffs of that turbulent time but the story has a more universal appeal about love and compassion for all animals, even us humans.