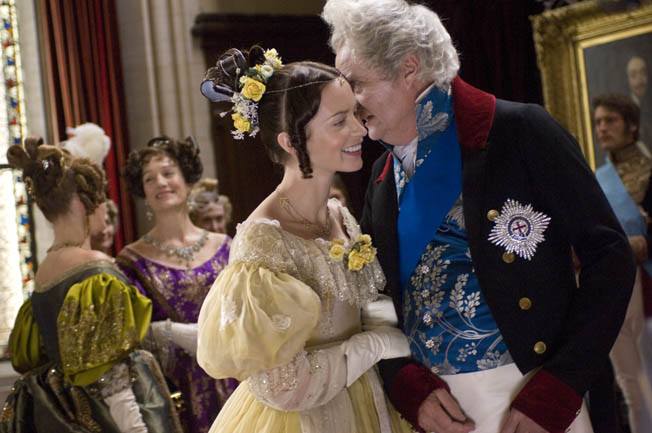 The modern eye sees Victoria (Emily Blunt), the longest reigning monarch in Britain’s colorful and long history, as a stern dowager queen clad in black and white who ruled the most powerful empire on earth. She was young once, though, and had to earn her stature as one of the world’s greatest leaders, find romance with Prince Albert (Rupert Friend) and battle court intrigue as “The Young Victoria.”

Under the rule of the aging King William IV (Jim Broadbent, "Inkheart," "The Damned United"), Sir John Conroy (Mark Strong, "RocknRolla," "Body of Lies"), the advisor to the Duchess of Kent (Miranda Richardson, "Damage," "Harry Potter and the Goblet of Fire") plotted to rule England by having the Duchess's daughter, seventeen year-old next in line to the throne Princess Victoria (Emily Blunt, "The Devil Wears Prada"), sign over her power to her mother by signing a regency order. But despite having been shielded from the outside world, the Princess recognized Conroy for what he was and displayed a stubborn streak that was just one of the things which attracted her eventual husband, Prince Albert (Rupert Friend, "The Boy in the Striped Pajamas," "Chéri"), to "The Young Victoria." Screenwriter Julian Fellowes ("Gosford Park," "Vanity Fair") stays close to historical fact in writing about the formation of England's longest ruling queen, but director Jean-Marc Vallée ("C.R.A.Z.Y.") gives the production a "Masterpiece Theater" finish which blunts the film's theatrical play. Still, Blunt is appealingly inexperienced but shrewd in the title role and once Rupert Friend becomes firmly entrenched in the action the film seems to find itself. This politically calculated union which nonetheless was guided by genuine affection is convincingly played by the two principals without overt Hollywood romance but with plenty of chemistry and a modern sexual spark. In England, William is displeased with the conduct of the Duchess, but publicly expresses his delight with his niece. Lord Melbourne (Paul Bettany, "Master and Commander: The Far Side of the World," "Inkheart"), a charmer, is sidling up with friendly advice designed to advance his own causes. In Belgium, the Duchess's brother King Leopold (Thomas Kretschmann, "The Pianist," "Valkyrie") is grooming his nephew as a consort for Victoria in order to have a proponent in the British court. But when Albert does meet Victoria he is the only one to give her advice that has no agenda attached. In a very charming combination of politics and romance, Victoria is wooed by Albert's sketching of economical but appealing housing for common laborers by creating what evolved into the duplex. After ascending to the thrown at the age of eighteen, Victoria takes her time with marriage, though. She cleans house of Conroy and has a chilly relationship with her mother, but her dependence on Melbourne is mocked by the British people and across the Channel, Albert frets and writes. When Victoria finally does propose two years after taking the thrown, she becomes pregnant with the first of their nine children immediately (they are portrayed as lovers, although the film is pretty chaste) and also survives an assassination attempt, gussied up here with Albert taking a bullet for her. Albert struggles with his role of consort until Melbourne himself advises the Queen to allow her husband to help her with her job, an end to an attempt by the filmmakers to create a romantic triangle where there is none. Albert's early death and Victoria's life long mourning are presented as a coda. The production is nice to look at but not as rooted in period reality as other royal biopics. Again, it plays more like a made for television movie than a theatrical film. And while Blunt is an engaging, if too pretty, Victoria, Vallée's strongest asset here is Friend, whose Albert is earnest but not dull, a man who starts off as a pawn then asserts himself. Mark Strong continues his streak of hissable villains (this performance is followed by "Sherlock Holmes"'s nemesis). Harriet Walter ("Sense and Sensibility," "Chéri") provides a warm presence as William's Queen Adelaide, a true friend to her young niece. "The Young Victoria" finds drama in the running of the royal household and Victoria's inexperience in maintaining political neutrality while ruling a nation, not, perhaps, the stuff of pounding pulses, but enough to maintain interest. It does startle with its credits that note both Martin Scorcese and Sarah Ferguson as producers. Royal watchers should keep their eyes peeled for a cameo of Ferguson's daughter, Princess Beatrice, as a lady in waiting.

This is a well-crafted, well-acted, informative and entertaining work that feels like a cross between Masterpiece Theater and a Hallmark Channel special, but with a budget. Director Jean-Marc Vallee brings the Julian Fellowes-penned script to the big screen with a distinct sense of purpose and gives us a well-made historical drama. Emily Blunt firmly establishes her character as a headstrong young woman who is surprised to learn just how close she is to becoming the crown head of the British Empire. There is one obstacle blocking her way to ascending the throne. If King William (Jim Broadbent) dies before she reaches her 18th birthday, her mother‘s (Miranda Richardson) consort Sir John Conroy (Mark Strong) will be made Victoria’s regent. However, she is aided by Lord Melbourne (Paul Bettany), an influential man who can help her gain the throne, though he also has his own hidden agenda for gaining power. Things change for the young queen when she meets her Austrian cousin Prince Albert and the two forms, first, a strong friendship then, later, something much deeper. This is where “The Young Victoria” excels as she and Albert grow to love and trust each other, with him as her to-be life-long advisor, lover and friend. The chemistry that develops between Blunt and Friend results in sympathetic performances depicting great people before they became great. Paul Bettany, as aide-de-camp Melbourne, starts of well enough as Victoria’s advisor but, as the romance kicks in, becomes, like the rest of the cast, a background character only. Miranda Richardson and Mark Strong are two-dimensional deceivers and Strong should have had a villain’s mustache to twirl. Jim Broadbent does his best establishing King William sympathetically in a very short time. Production is nicely detailed, from lensing to costume, makeup and set design and make the history lesson one that you will not mind learning.