The Year of the Yao 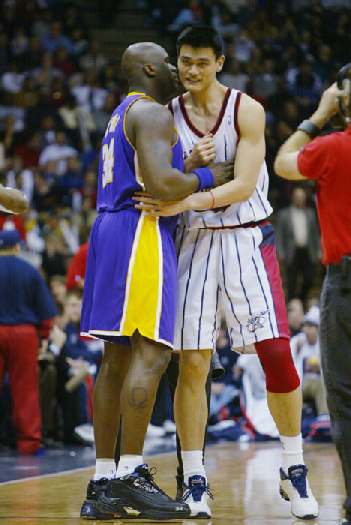 Chinese basketball phenomenon, 7’ 5” Yao Ming, made his American NBA debut as the first round draft pick for the bottom dwelling Houston Rockets during the 2002-2003 basketball season. Documentary filmmakers Adam Del Deo and James D. Stern tell about that momentous year as seen through the eyes of Yao’s diminutive translator, Colin Pine, as the rookie helped make the sport a truly international one in The Year of the Yao.”

The Houston Rockets made a bold gamble with their first draft pick in 2002 - they chose the 22 year old non-English speaking Shanghai Shark, Ming Yao, not only for his athleticism, but for his 7' 6" 310 lb. frame. Armed with an equally green translator, 28 year old Colin Pine, the rookie NBA player turns a very wobbly start into "The Year of the Yao." Actually, the film could as easily been titled "My Giant," as codirectors James B. Stern and Adam Del Deo present their material almost entirely through the eyes of translator Pine. B'ball fanatic Stern (IMAX's "Jordan to the Max") recruited his former producer Del Deo, a non-sports nut, to codirect this East meets West cultural clash on and off the sports court, but while their subject is amiably charismatic, the filmmakers fail to fully get beneath his skin. Still, this entertaining flick provides a real bird's eye look at the tremendous pressure - Yao was a Sports Illustrated cover boy before playing a single NBA game - and bewildering weirdness that Yao endured during his rookie year. The filmmakers open with a brief rundown of China's historic isolation as epitomized by the Great Wall and its gradual relaxation to the West beginning with the Ping-Pong Diplomacy of 1971. They astutely use this event to segue to the ping pong balls used for the NBA's draft pick lottery and the Rocket's controversial choice, before introducing us to Colin Pine, who will act as a guide throughout the film. Pine, who chose this assignment over law school because his love of all things Chinese, is extremely nervous, being unfamiliar with both the role of translator and the sport he's about to become intimately involved with ('Chinese was my second language, basketball my third'). As Colin awaits Ming's arrival at the Houston airport, we're given a quick history of the Chinese center who began playing professionally at the age of fourteen. Yao and Colin both have shaky starts. The player must face not only new terminology, but the speed and aggression of the NBA. The interpreter faces a whole new world as well - sports. Ming is quickly dismissed by the press, who regard him as an awkward oaf, with Charles Barkley proclaiming on a television sports how that he'll kiss ass live if the player ever manages to score nineteen points, but the Rockets and Coach Rudy Tomjanovich remain supportive. Always looming in the shadows is the much anticipated matchup between Yao and Shaquille O'Neal, the NBA's former tallest player at 7' 1" and 325 lbs. Shaq's sidelined for the first Rockets/Lakers game, but Ming amazingly backs Barkley into his own corner and all bets are off. Stern and Del Deo do a great job contrasting the East/West divide in both sport and culture. It is surprising to learn that the Chinese revere basketball so much that it survived the cultural revolution because they felt the sport was their own, but team playing, vs. individual heroics, are emphasized there. Even sports medicine is radically different, as is made humorously evident when Colin tells Ming 'They want to put electricity in you' and Yao tries to tout the benefits of acupuncture instead. Perhaps even more extreme is the cultural divide - hearing Colin explain road rage accentuates just how insane the American lifestyle really is. A yen for a bite of snake is compared with Ming's first Thanksgiving turkey and the bizarre nature of Western celebrity is hilariously noted in Ming's first commercial for Apple Computer, with "Austin Power's" mini-me himself, Verne Troyer. The film climaxes with the drama and deadening schedule of an All Stars Weekend, followed by the absolute mania that meets the first Yao vs. Shaq game, which equates to world soccer final frenzy back in Shanghai, before the film trails off on an ambiguous note. The filmmakers have succeeded in making a buddy movie of sorts, the attachment between Yao and Pine palpable, but when it comes to Yao's family and friends, we learn little to nothing. We know Ming's parents were also professional basketball players and that he therefore had some advantage growing up. His modest bedroom in the family's Shanghai apartment is a far cry from their new Houston digs, but money, a huge consideration in professional sports today, is never mentioned. Yao's parents remain blank bystanders and Ming quickly diverts cameras from the picture of his girlfriend which adorns his nightstand. The film is also hurt by the dated feeling of watching a third-year player's rookie year with no addendum. Still, "The Year of the Yao" is a solid portrait of a most unusual and likable guy. It's a sports documentary that can be enjoyed by anyone interested in the human race.

Soccer fanatic Mauro dreams of playing on the same field as his idol, Pele. His life abruptly changes, though, when his parents, Daniel (Eduardo Moreira) and Bia (Simone Spoladore), suddenly announce that they are dropping the boy off with Daniel’s aging dad while they go on vacation. That is what they tell Mauro to tell others – his mother and father are on “vacation” and will be back before Brazil plays its first Cup game But, when Mauro bangs on his grandfather’s door, there is no answer. The next-door neighbor, old Shlomo (Germano Haiut), breaks the bad news to the youngster – the old man had a heart attack and died. Mauro finds himself all alone in the Jewish-Italian neighborhood of Bom Retiro in Sao Paulo and Shlomo is coerced, by the ‘hoods’ elders, to take care of the boy until they can figure out what to do with him until his parents return. Shlomo grudgingly takes the assignment only to be horrified that Mauro is not circumcised and, thus, a goy. Still, he is responsible for the kid and does his best as the neighbors rally around to help care for Mauro. This results in one of the films frequently funny montage sequences as he, daily, ferries himself from one home to another to be fed lunch. The neighborhood embraces their new ward. While Mauro’s missing parents and his assimilation into the neighborhood are the emotional core of “The Year My Parents…,” it is Brazil’s participation in the World Cup competition that fosters the most excitement and laugh out loud moments. One of the student intellectuals, Italo (Caio Blat), takes a liking to Mauro. His girlfriend, a pretty waitress, Irene (Liliana Castro), takes the boy under here wing, too. Everyone wants Mauro to join them to watch the opening soccer match with Czechoslovakia but he decides to stay at his grandfather’s flat, knowing his dad will keep his promise. Daniel and Bia, though, never show up. The large and likable cast is anchored by the open, natural appeal of newcomer Michel Joelsas as Mauro. The young actor gives a mature and believable performance as a boy the ‘hood would adopt as one of their own. Germano Haiut, as Shlomo, is a terrific foil for Mauro as he instills traditional values to the boy. The rest of the players give full dimension making the environment and life in the ‘hood a very realistic thing, indeed. Director Cao Hamburger, his writers (Hamburger, Claudio Galperin, Braulio Mantovani and Anna Muylaert) and behind the camera crew do a terrific job in recreating circa 1970 Sao Paulo and the excitement the country feels for its footballer heroes. The Year My Parents Went On Vacation” intricately weaves a melancholy tale about a boy abandoned, due to necessity, by his parents and losing a grandfather he never knew. Couch this with the warm and giving people of the neighborhood, the national fervor over the World Cup and an invigorating dose of honest humor and you can understand why Brazil proudly offered the film for Oscar consideration. It did not make the short list. It should have.