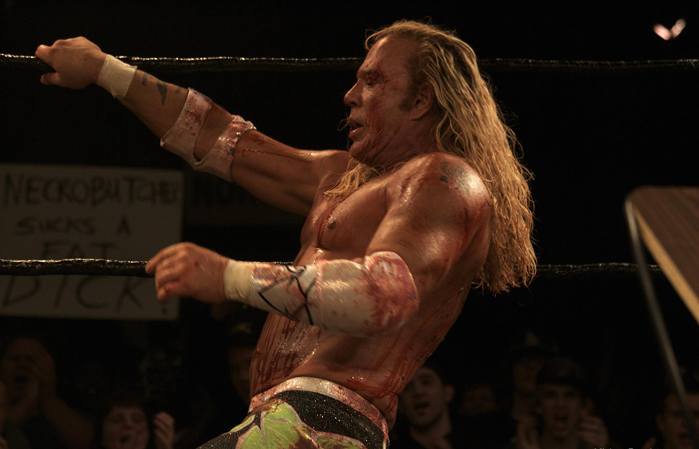 20 years ago, Randy “The Ram” Robinson, was top dog on the world wrestling circuit immortalized by an action figure and a “Ram” video game. His best days are far behind him as he now ekes out a living scrapping in high school gyms for dozens, not the previous thousands, of fans. When Randy suffers a heart attack he must face his wrong decisions in life and make amends in “The Wrestler.

You have to hand it to Mickey Rourke. The actor played the handsome bad boy early in his career with “Diner” and “Rumble Fish” but really showed his acting chops in the 1987 film, “Barfly.” Rourke eschewed the normal Hollywood star route and marched to his own tune, falling from popular notice over the last 20 years. In “The Wrestler,” he is back, in top form, giving a nuanced and sympathetic performance as Randy “The Ram” Robinson. Director Darren Aronofsky blazed his own filmmaking trail with his debut feature, “Pi,” “Requiem for a Dream” and “The Fountain.” His unique vision is seen, once again, with his character study about a man whose dreams are far behind and mortality and loneliness are his lot in life. The helmer does a fine job and highlights Mickey Rourke to excellent affect. Co-star Marisa Tomei, as Randy’s friend and potential love interest Cassidy, gives a solid performance as a good-hearted stripper who genuinely cares for her wrestler friend. Faring less well is Evan Rachel Wood as Robinson’s estranged daughter, Stephanie, a bitter young woman whose heart has been broken too many times by her father. Her character is underwritten, almost an add-on to the film, making Stephanie two-dimensional, at best. “The Wrestler” works best when Randy plies his violent trade. The scenes in the ring are given verisimilitude as The Ram holds court with his much younger colleagues ­ played well by non-actor professional wrestlers who draw your empathy. Aronofsky pays homage to the sport and takes no cheap shots at its players and their choice of profession. The matches have the right tone of entertainment and realism as the wrestlers face off as adversaries in the ring. The locker room scenes, where Randy praises them all for their dedication and skill, feel true to life. Pro wrestling fans are the obvious target audience for “The Wrestler” but Rourke’s fine performance, Aronofsky’s craftwork directing and the well-written script by Robert D. Siegel should garner interest from others, too.