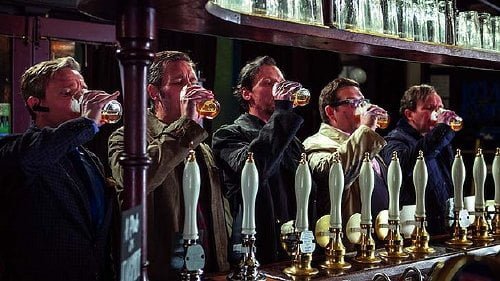 Gary King (Simon Pegg), 40-years old, is still living like the rowdy young man of his youth. He wants to go back to his old stomping grounds and relive his glory days. He rounds up his old drinking buddies from Newton Haven to go on a 12 pub tour, The Golden Mile, which will finish at “The World’s End.”

On June 22nd, 1990, five buddies attempted to complete their home town of Newton Haven's infamous Golden Mile, a pub crawl stopping at twelve different establishments. Not only did they never make it, the evening's catastrophes caused a rift among the guys and Gary King (Simon Pegg, "Shaun of the Dead"), the irresponsible leader of the group. Now, twenty years later, Gary hasn't changed, wants to mend the friendships and somehow convinces each to show up for one more try to make it all the way to that last pub, "The World's End." 40 year-old Gary still dresses like the Goth Punk teenager he was which makes him a spectacle as he visits each of his former friends, most family men, all with respectable careers. When Peter (Eddie Marsan, "Tyrannosaur," Showtime's 'Ray Donovan'), perpetually blue-toothed Oliver (Martin Freeman, "The Hobbit: An Unexpected Journey") and Steven (Paddy Considine, "Hot Fuzz") each respectively ask him if Andy (Nick Frost, "Shaun of the Dead"), Gary's former best friend, is joining this reunion, he simply lies. Gary caused Andy grievous harm twenty years prior, and Andy turns him down flat when he visits him last. Yet when the appointed meeting day and time arrives, everyone's there - except Gary, who's three hours late. At the first stop, First Post, Gary's astonished that his notoriety has died, that the pub's been homogenized and that Andy won't touch alcohol. Old Familiar is identical to First Post, but Steven's old crush, Oliver’s sister Sam (Rosamund Pike, "An Education"), joins them there, but is unwilling to join Gary in 'the disabled' for a quick shag as she had years ago. Things take a decidedly weird turn at Cross Hands, when one of the group of taciturn teens who've been dogging them get into a fight with Gary in the loo and he literally knocks his block off, only to be covered in blue 'blood.' Suddenly it all makes sense - to Gary at least - Newton Haven's become some kind of Stepford town! By the time they run into their old school dean Mr. Shepard (Pierce Brosnan, Pike's "Die Another Day" costar) waiting with their pints at The Beehive, they're in Bodysnatchers territory. Cowriter (with Simon Pegg)/director Edgar Wright ("Shaun of the Dead," "Hot Fuzz") completes his 'Three Flavors: Cornetto Trilogy' (so named for the ice cream brand which appears in all with a wink from Wright to Kieslowski's Three Colours) with a film that has a lot in common with the first, in which Pegg and Frost also fought losing their identities in a pub, but they're much older here and the themes run deeper. But more important than forgiveness, attempting to 'go home again,' redemption, globalization and the effects of social media is the sheer exuberance of the comedy. Simon Pegg is on fire here, giving a truly balls-to-the-wall performance as Gary. It's his best ever, especially as he partakes in an all out bar brawl without spilling a drop of his pint. The film bogs down a bit at its sci-fi climax in The World's End, where the lads are tempted with becoming their younger selves, only to spring back with a post-apocalyptic coda that's hugely satisfying (watch for that mint chocolate chip Cornetto wrapper!). Cinematographer Bill Pope ("Scott Pilgrim vs. the World") shoots on 35 mm (the prologue on 16) with effects only marginally CGI'ed (Newton Haven's residents eventually glow from their mouths like walking flashlights - make that torches - a nod to " Invasion of the Body Snatchers'" eerie yowl). Music supervisor Nick Angel uses Gary's vintage mix tape throughout featuring Blur, The Soup Dragons, Happy Mondays, Suede, James, Pulp, Saint Etienne and The Sundays. Watch for cameo appearances from such British actors as Rhys Ifans and Rafe Spall. 2013 has been the year of the apocalypse movie, from "This Is the End" to "Pacific Rim," but "The World's End" is the only one to remind us all that there's always time to stop for a pint.

Director/scribe Edgar Wright and co-writer Simon Peg have collaborated since their 2004 hit, “Shaun of the Dead,” followed by “Hot Fuzz” in 2007. They continue their work together to complete their trilogy with “The World’s End.” What we get is a technical rehash of what they did before but with its own goofy plot about aliens changing the inhabitants of Newtown Haven into robots. Pegg is joined by his other longtime collaborator, Nick Frost, as one of the reluctant participants in Gary’s crazy quest to complete the Magic Mile. King’s only requirement is that they have to drink at least one pint per pub. Andy was once as wild as Gary but life made him grow up and he stopped drinking. His pint? Much to Gary’s chagrin, it is a pint of tap water. Despite this minor roadblock, Gary herds Andy, Steve (Paddy Considine), Oliver (Martin Freeman) and Peter (Eddie Marsan) on to the next colorfully named drinking establishment. Their tour starts to take on ominous tones when some of the town’s inhabitants begin to act weird. A confrontation with a group of teenagers ends in mayhem but, then again, does not. This begins a pub crawl that turns into a fight for mankind with Gary as the leader in the struggle. Add to this drama the return of Gary’s old flame, Sam (Rosamund Pike) – well, they had a drunken shag 20 years ago in a pub bathroom. With action, robots and romance, “The World’s End” tries a bit too hard and loses steam by the time of the finale. There is an organic feel in the trilogy but, unlike “Shaun” and “Fuzz,” the humor feels more forced and less spontaneous in “The World’s End.” However, the cast of characters are a likable bunch of blokes, including and especially Sam. Rosamund Pike, as the long-term love interest for the boys and Peter’s sister, gives a nice dimension to her Sam with seeming to try hard. Pegg is first in the ensemble and does a good job being an irresponsible middle-aged teenager. His character, Gary, is given a back story to temper his irresponsible character’s behavior. Nick Frost, Paddy Considine, Martin Freeman and Eddie Marsan, as the reluctant drinking buddies, do yeomen’s work giving some dimension to their less developed characters. Edgar Wright and Simon Pegg have to expand their horizons. There becomes a sameness in “The World’s End” that leeches elements from the previous two films – like many close up shots of pints of beers being poured, frenetically. I would like to see a comedy by the duo that eschews flesh-eating zombies, murderous cultists and alien robots and is just plain funny.