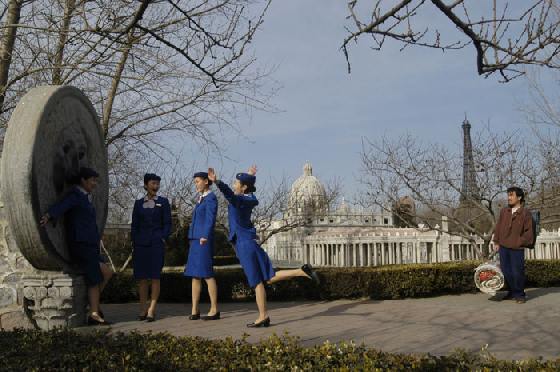 In Beijing, twentysomethings from rural Chinese provinces come together to work in the big city. Dancers, costumers, security guards and administrators shuttle among detailed, one-third scale replicas of the most famous sights of five continents in World Park, a sprawling amusement that is part Epcot Center and part Las Vegas style entertainment, all connected by monorail. For the young people who work there, all their joys, hopes and sorrows are intertwined with the new society they've created which, for them, is indeed "The World."

Writer/director Jia Zhangke's ("Unknown Pleasures") film begins with the colorful backstage chaos that precedes one of World Park's Vegas showgirl spectacles, women parading in ethnic costumes tarted up with feathers, headdresses and day-go colors. Daytime finds dancer Tao (Zhang Tao, "Unknown Pleasures") on a cell phone to her security guard boyfriend Taisheng (Taisheng Chen) - 'I'm on the train. I'm going to India.' She arrives with just enough time for a sip of water from the cooler that's just been installed in front of the Taj Mahal, then joins the dancers waiting to give a periodic exhibition to the outdoor strollers. Zhangke shows these young people interconnected by high tech, yet imprisoned by an economy that drains its rural resources into the big cities where they then must support the older folks left behind. Tao and Taisheng are the central couple in this microcosm of a globalized society where a Tao eats Pringles in traditional Japanese costume and text messages her boyfriend yet claims to not know a single person who's ever flown in an airplane. One woman sarcastically tells the jealous Nui (Zhong-wei Jiang) to get his girl, Wei (Jue Jing) one of the new cell phones with global tracking to keep tabs on her whereabouts, a reference to their entrapment in what they perceive as a vast space. A "Titanic" poster graces the back door of an employee dorm, a space as cramped as an interior ship cabin with bunk beds. A family friend of Taisheng's, nicknamed Little Sister (because his parents had wanted a girl) comes to the Park to find work and gets a tour from Taisheng, who points out several sites, including Manhattan. When Little Sister points out that the Twin Towers were bombed on September 11, Taisheng proudly responds "We still have them!' Little Sister gets a job in construction (and leaves a letter for Taisheng that is heartbreaking). One person who is not in thrall to 'seeing the world without leaving Beijing' is one of four Russian employees who are introduced in early goings. Anna (Alla Shcherbakova) forms a close bond with Tao, even though the two speak a different language. When Anna decides to leave, Tao accompanies her out of the Park, a blissful smile on her face which Anna quietly observes. Anna leaves on a plane. Tao's still hopeful during her surprising exit at film's end, but the dramatic circumstances speak volumes. "The World" pulls the viewer into the everyday of all its characters, but at a remove. The bright burst of color at film's opening where the camera follows one dancer turns into long takes in medium and long shot which are mostly washed out grays. Zhangke also uses some crude animation that is jarring and a bit inexplicable - always depicting some mode of travel with text messaging. (If he wanted to avoid closeups in order to convey the messages, wouldn't subtitles have sufficed?) Mood is enhanced with the occasional title card, like 'Ulan Bator night' or 'Tokyo Story' (Ozu reference?) and the meditative effect of the film is magnified by Giong Lim's ("Millenium Mambo") terrific electronic score. Even with his observational style, Zhangke's film compels, culminating in a wedding, three deaths, a promotion and news that World Park will be Central TV's New Year's Eve broadcast location (one billion viewers!). Peopled with sympathetic characters, "The World" makes a statement about the changing China in which they live.

China’s World Park motto is “See the world without ever leaving Beijing!” The makers of that theme playground have created one-third scale versions of such famous sights from the five continents as the Taj Mahal, the Eiffel Tower, Big Ben, the Leaning Tower of Pisa, the Great Pyramids, London Bridge and the twin towers of the World Trade Center. But, this outer façade masks the fact that the thousands of people working there, entertaining and caring for the park visitors, will never get to see these wonders for real in “The World.” Writer/director Zhang-ki Jai has created an oddly compelling film that has the feel of both a fictional narrative and a documentary. The focal characters are Tao (Tao Zhao), a pretty young dancer who performs in the park’s extravagant floorshows, and Taisheng (Taisheng Chen), her security guard boyfriend who has a wandering eye for the ladies. These are just two of the many people working in the park as we get a behind-the-scenes slice of life story. Joining Tao and Taisheng is an eclectic collection of players toiling the days in the bowels of a faux fantasyland. For these workers it’s put on a smile and be nice to the patrons of World Park. Otherwise life goes on its tedious ways. One nice bit of on screen chemistry comes when a troupe of Russian dancers arrives on the scene and one, Anna (Alla Shcherbakova), becomes fast friends with Tao. The language barrier between the two is paper-thin and, despite being unable to communicate via normal means, the two develop a deep understanding and affection for each other. The World” is a culture shock movie for western filmgoers as we see the characters lives through their, not our, eyes. For them, the daily journey from India and Egypt to Paris, London and New York (“We still have our Twin Towers!” the guides proudly proclaim), is a tedious trek through a land of artificiality. For the entertainers and workers at the park there is little, if any, chance to go beyond its borders. They use fake planes to give the feeling of worldly travel but few of the denizens have even been on a real plane. This is a very different concept to one from a culture (me) that takes air travel for granted and have logged tens of thousands (or more) of miles in the air. And, this is just one of the shocks to the American system. One bridging device that Zhang-ki Jai uses is initially distracting but, as it is used several times, it becomes clear with what the filmmaker is doing. The cell phone is an important part of society – American, European and Asian and everyone else in the first and second worlds – and Jai uses animation sequences as a bridge with text messaging and fantasy to carry things along. The technique does distract, at first, but works with its repetition. The World” steeps the viewer in a culture that clings to traditional conventions but must, to survive, embrace the mores of the high-tech, fast paced world being thrust upon them.