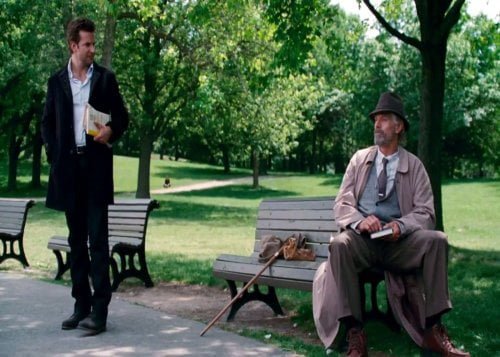 Rory Jansen (Bradley Cooper) is at the top of his career as he accepts a prestigious literary award for his Great American novel. But, this fame has a price as we flash back to the true story of his successful first book in “The Words.”

Rory Jansen (Bradley Cooper, "The Hangover") is at that crossroads where the demands of reality are crashing up against his dream - becoming a writer. Having procured a final loan from his dad (J.K. Simmons, "Juno") and many rejections from publishing houses, Rory spends an evening transcribing an amazing story he found in a vintage briefcase his wife, Dora (Zoe Saldana, "Avatar," "Colombiana"), bought him on their honeymoon. She reads it and, believing him the author, says this is the work that will put him on the map. When his boss, editor Timothy Epstein (Ron Rifkin, "The Substance of Fire," TV's 'Brothers and Sisters'), is bowled over, Rory is seduced into publishing "The Words." Feature debuting cowriter/directors Brian Klugman & Lee Sternthal (they share a story credit for "TRON: Legacy") were talking about an old story about how Hemingway's wife lost his in progress work on a train and began to spin out from there - what might have happened if somebody found it? Would the person have recognized its genius? And so on. Not a bad idea for a film, and yet in its translation they borrow the structure of "The Hours," stuff their dialogue full of silly pretentiousness and feature the heart of their story with lesser known actors in the style of a History Channel recreation. Woody Allen took himself far less seriously covering this same idea in "You Will Meet a Tall Dark Stranger." The film begins in mid-stride, with Rory and Dora dressed to the nines, boarding a limo to attend a Manhattan event where Rory will receive a prestigious literary award. Lurking at the entrance to their building is 'The Old Man' (Jeremy Irons, "Dead Ringers," "Margin Call"), observing while Dennis Quaid ("What to Expect When You're Expecting") narrates. Eventually it will become clear that we are watching a book-within-a-book (but the filmmakers insistence on calling Irons 'The Old Man' throughout remains annoying). We get the flashback giving us Rory's background and trying to figure out how someone with no money lives in a Manhattan loft and honeymoons in Paris. Klugman and Sternthal (childhood buddies of Cooper) jump out of Rory's story to give us Quaid's Clay Hammond, a tweedy respected writer giving a reading of his new novel, which is the story about Rory's plagiarism. Hammond is being relentlessly pursued by Danielle (Olivia Wilde, "TRON: Legacy"), a sexy grad student who cajoled a professor into getting her a ticket so she could tell Clay about how she knows all about him. This outer shell adds little except to proffer the presumably heavy concept that one can live one's life as real or fiction. Quaid can't sell it and Wilde is unappealing. Finally Rory is confronted by The Old Man on a park bench and what should be immediately apparent to anyone is teased out. Pity Irons, who creates one of the few believable characters in this film, only to be left adrift. His story, the one Rory published as 'The Window Tears,' is now shown with a Young Man (Ben Barnes, the "Narnia" series' Prince Caspian) palling around with 'Ask the Dust' author John Fante in post-WWII Paris. The man is an aspiring writer who falls in love with cafe waitress Celia (Nora Arnezeder, "Safe House") but doesn't find his voice until tragedy strikes. Nothing about this suggests the 'Great American novel.' These new filmmakers worked long and hard to bring their idea to the screen, but unfortunately their direction has resulted in uneven acting and a tone deaf ear. Cooper isn't the first actor that comes to mind as a man of letters and he's merely OK, fading fast when Irons enters the picture. His most convincing scene is begging money from his dad, one in which the great character actor J.K. Simmons' reality speech is bracing. Zoe Saldana is good as the supportive wife who must contend with betrayal, but even Oscar winner Irons faces heavy lifting trying to convince in the film's final scene. In a film all about writers writing and living life, "The Words" is short a few drafts.

“The Words” is actually three stories – Rory and his struggles with the morality of plagiarism; the Old Man (Jeremy Irons) and the story about his book, the one Rory stole; and, Clay Hammond (Dennis Quade), a writer and the film’s narrator (and I do not know why this character even exists). As I watched “The Words” play out on the big screen I had the overwhelming feeling that I had seen this formula in another film not that long ago. Then, it hit me: “The Hours,” a far better film rich with its three stories and fine acting by stars Meryl Streep, Julianne Moore and Nicole Kidman. “The Words” does have one fine performance by Jeremy Irons as the Old Man and the real author of Rory’s success. The actor envelops his character and imbues him with sympathy. I cannot say the same for the rest of the cast, mainly due to a shallow story that is wooden in its creation and execution. Rory is a two dimensional being who wants to be a great writer but must steal another’s work to do so. Other good actors are relegated to minor characters, such as J.K. Simmons as Rory’s father and cash cow, a fine cameo perf. First time writers-directors Brian Klugman and Lee Sternthal try hard to make the story dovetail to incorporate the three separate tales. The result, though, is uneven and gives little cause for sympathy for ambitious plagiarist Rory or his fiancée/wife Dora (Zoe Saldana with little to do). The film is best when Irons is on screen and his flash back story is told. The actor’s weather worn face is a character unto itself. In trying to juggle three unevenly weighted stories, the filmmakers make “The Words” more like a series of vignettes strung together with Rory’s conscience, or lack there of, being the principal subject as he struggle with his lies and deception. Bradley Cooper plays most of the film looking anguished and guilty, even when he tries to come clean with his wife, his publisher and his public. There could have been a good film in here but there is not.