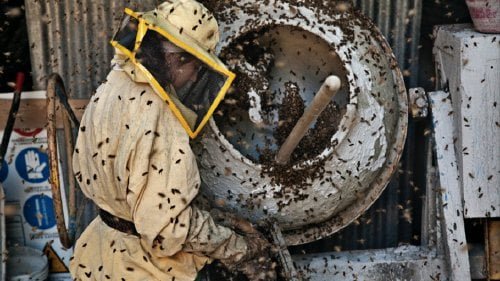 In a small town between Umbria and Tuscany, a German father Wolfgang (Sam Louwyck, "Bullhead") and his Italian wife Angelica (Alba Rohrwacher, "I Am Love," the director's older sister) are struggling to bring up their four daughters in a pure environment, living off the land in an old stone home sorely in need of renovation. The heart of the family is the eldest, Gelsomina (11 year-old newcomer Maria Alexandra Lungu), cherished by her headstrong dad who respects her beekeeping abilities, honey being the main source of the family's income. When a reality TV show comes around looking for artisanal food producing families to compete, Gelsomina defies her father's wishes and signs them up for "The Wonders."

Writer/director Alice Rohrwacher, whose film won the Grand Prix at the 2014 Cannes Film Festival, has created a magical coming of age tale that defies cliche. Here is a tale of a family of women dominated by a well-intentioned but gruff man whose daughter gracefully wrests control and restores a peaceful balance. Rohrwacher plunges us right into the family dynamics as the household is awakened in the middle of the night by the lights of hunters. Poor second eldest Marinella (Agnese Graziani) has gotten up to relieve herself at their rather public toilet and finds herself with an audience. As dawn arrives, Wolfgang ambles to the edge of the field clad in drooping underwear to swear at the shooters. This is a family of the land, yet outsiders to the locals. The family, which includes permanent guest Cocò (Sabine Timoteo), a relic from their past, works hard and woe to the child who spills a drop of honey changing out the bucket beneath their extractor's spout. Dad isn't completely without a sense of fun, though, and it is when he's taken his daughters to swim that they first encounter the 'Countryside Wonders' crew, shooting a promo with Milly Catena (Monica Bellucci, "Irreversible," "The Passion of the Christ") whose costumed, fantastical beauty mesmerizes the young girls. Family dynamics are shaken up further with the arrival of Martin (Luis Huilca), a young juvenile delinquent (and another German male) whom Wolfgang has offered to foster for additional income without the family's knowledge. Rohrwacher's vision of day-to-day life itself has the feel of a primal, outside of time civilization, something she emphasizes in her climax, the televised competition finale staged in the Blue Whale grotto, all participants attired in ancient costume. Although she is often referred to as the 'head of the family,' it is not Gelsomina who is put before the microphone, but Wolfgang, who once again ruins things with his severe outlook. But Gelsomina won't be held down, demanding more time to put on a mystical display accompanied by Martin's unearthly whistling. Cinematographer Hélène Louvart ("Pina") shot in Super 16, a medium which gives the film the timeworn handmade quality of the family's goods. Rohrwacher has achieved wonderfully natural performances from her untrained child actors (Eva Lea Pace and Maris Stella Morrow play the two youngest), with Lungu luminous as the central protagonist. Sister Alba exhibits great calm (until she lets go in one scene) and maternalism, the steel bearing the weight that is Wolfgang's misdirected anger (the actress is also stunningly beautiful in a Swintonesque way - no mistake she played Tilda's daughter in "I Am Love"). Although grounded in ancient naturalism, the film features bits of whimsy, like the camel Wolfgang gifts Gelsomina as a peace offering, or the spirit shadows that leap above a pair of sleeping children celebrating their freedom. "The Wonders" is a wise, enchanting work from a filmmaker with a unique vision. Grade: