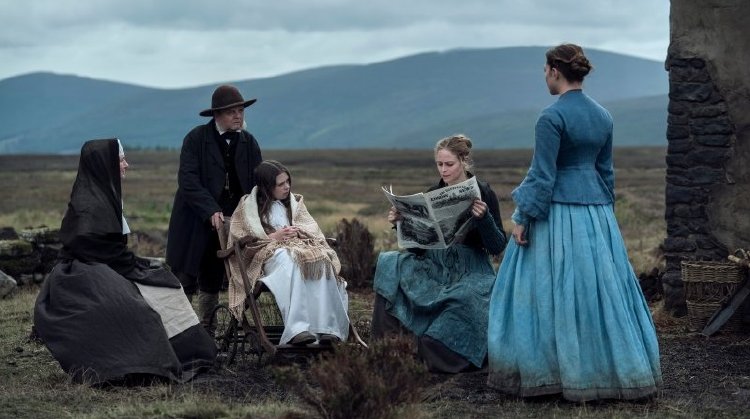 In 1862, nurses Lib Wright (Florence Pugh, "Don't Worry Darling") and Sister Michael (Josie Walker, "Belfast") are called by a committee of five men including the local pub owner, a doctor, a priest and local landowners to come to a small town in the Irish Midlands to be ‘watchers’ who will either debunk or, as the majority hopes, prove a miracle.  Tourists have already descended on the town to view eleven year-old Anna O'Donnell (Kíla Lord Cassidy), whose survival for four months on only water has been deemed “The Wonder.”

Cowriter (with Alice Birch, "Lady MacBeth")/Sebastián Lelio ("A Fantastic Woman") continues his streak of films about strong women facing societal obstacles, this time a period piece based on a novel by "Room's" Emma Donoghue where science is pitted against religious beliefs in a contest of grieving mothers.  Pugh gives a sober, determined performance as a widowed Crimean Nightingale whose loss of a child in infancy causes her to self medicate with opium as she tries to save another from self-sacrifice.

Lib begins gently teasing information from Anna during her 8 hour shifts, the girl telling her she subsists on ‘manna from heaven.’  Looking for clues in the girl’s upstairs room, she notes a family photograph, learning an older brother has ‘passed.’  It is his lock of hair the nurse finds inside a ceramic bust of the Virgin Mary.  Oddly, Anna probes Mrs. Wright until the older woman gives up her birth name, Lib’s relenting followed by asking Anna for her own preference (Nan), an exchange with later significance.  After making an observation involving Anna’s mother, Rosaleen (Elaine Cassidy, "The Others"), Lib forbids outside visitors and any physical contact with her family.  Rosaleen, dad Malachy (Caolan Byrne) and housemaid Kitty (Niamh Algar) respond by singing a hymn with the bedridden girl from the top of the stairs.

As Lib anticipates, Anna’s health begins to fail, but appeals to Dr. McBrearty (Toby Jones, "First Cow") fall on deaf ears and, appalled by the cruelty and betrayal of the act, she abandons an attempt to secretly force feed her.  She forges a relationship with The Daily Telegraph’s Will Byrne (Tom Burke, "The Souvenir") on her long walks across the moor to and from the O'Donnell’s thatched cottage, one which becomes intimate, and when the council who hired her refuses to accept her prognosis that the girl will die, he is who she turns to.

Lelio tamps down on any hysterical aspect of his bizarre central mystery, its horrific secrets unfolding quietly as if in confessional.  His approach works because of his maternal subtext and the trustful psychological bond Pugh forges with Cassidy.  (The film also stars “Calvary’s” David Wilmot as pub owner Seán Ryan, “Belfast’s” Ciarán Hinds as Father Thaddeus, Brían F. O'Byrne as John Flynn and Dermot Crowley as Baronet Sir Ottaway).

“The Wonder” ends on a quiet note of hope, the surprisingly complicit Sister Michael adding the perfect spiritual framing.

1862 in the Irish Midlands and British nurse Lib Wright (Florence Pugh) is summoned to a small village to observe a young girl, Anna O’Donnell (Kila Lord Cassidy), who has apparently survived for months without eating a morsel of food. Is Anna living solely on the “manna from heaven” and is a saint or is something else, much worse, afoot in “The Wonder”?

This is Florence Pugh’s film and the young actor does a solid job as the practical-minded nurse brought to the village to “prove” the miracle of Anna surviving only on the energy of the sun. Nurse Lib will do due diligence in her observation of Anna, but she soon becomes suspicious of just what it is she is observing. She searches for hidden food and suspects Anna’s mother is somehow feeding her daughter in secret.

The observation is hindered by the steady stream of gawkers and pilgrims who want to see the miracle girl. The public acceptance in the miracle only exacerbates the village elders’ belief, with support from the Church, that they have a true miracle on their hands.

What I like best about “The Wonder” and Pugh’s performance is the contrast of the modern-thinking, intelligent and educated nurse and the closed-minded, almost medieval villagers whose “faith” defies any modern logic. Lib is the sole voice of reason as the village folk are gripped by prospect of a miracle and a saint in their midst.

We seem to be at the renaissance of films set in period Ireland with Martin McDonagh’s first rate “The Banshees of Inishiren,” and now “The Wonder.” There is a lot of material to make movies about the Emerald Isle and its turbulent history so we may get more. Let us hope the quality of these two films bodes well for the future and for movie fans.