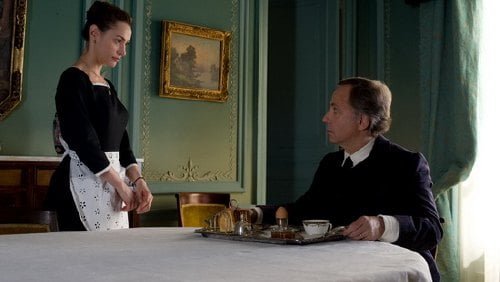 Jean-Louis Joubert (Fabrice Luchini) is a successful Parisian stockbroker who lives with his snobby wife, Suzanne (Sandrine Kiberlain) and, when they are home from boarding school, his two spoiled teenage sons. Their maid and cook, after a squabble with Suzette, abruptly quits, leaving the family to their own devices. Unable to care for themselves, they find a young Spanish woman, Maria (Natalie Verbeke), and her appearance will change Jean-Luis’s mind about “The “The Women on the 6th Floor.”

After his wife fires longtime housekeeper Germain, investment broker Jean-Louis Joubert (Fabrice Luchini "Intimate Strangers," "Potiche") becomes enamored of their new, Spanish maid Maria Gonzalez (Natalia Verbeke, "Jump Tomorrow," "Dot the I") and not just because she makes the perfect three and a half minute egg. Jean-Louis pays his first visit upstairs where Maria lives with the other Spaniards who attend households in the area, is horrified at their living conditions and becomes their advocate. When Suzanne (Sandrine Kiberlain, "Mademoiselle Chambon") throws him out over an imagined affair with his man-killer client Bettina de Brossolette (Audrey Fleurot, "Midnight in Paris"), she's horrified to find out he's moved in with "The Women on the Sixth Floor." Cowriter/director Philippe Le Guay has made the type of crowd-pleasing creating-new-family from disparate members of others, upstairs/downstairs cultural clash romantic comedy that gets picked to ease audiences into a film festival, and it is the film that has been chosen for the Opening Night of Boston's Museum of Fine Arts' 16th Annual French Film Fest. Featuring some of Spain's most well known actresses (Le-Guay seems to have robbed Almodóvar's casting agent) and two of France's biggest stars, "The Women on the Sixth Floor" has many simple pleasures to offer, but the film is also cliched and a major plot development undercooked and somewhat inexplicable. Jean-Louis and his younger wife Suzanne live in a grand Paris apartment handed down by his mother, who died 6 months ago. Suzanne is a country girl, now quite chic, who has taken on insufferable airs to compensate. It is her insensitivity to Germain's attachment to her former mistress that results in the older French maid being fired - Suzanne is ditching maman's things to turn her former bedroom into an office (for her correspondence and reflections she tells her perplexed husband). Suzanne lunches with two snooty friends who tell her about their luck with Spanish maids who only want time off to go to Church. On the 6th floor, Maria has just arrived to join her aunt, Concepción Ramirez (Carmen Maura, "Women on the Verge of a Nervous Breakdown"). When Suzanne agrees to try her out, she leaves a list a mile long and Concepción calls Dolores (Berta Ojea, "The Devil's Backbone"), Pilar (Concha Galán, "Volver"), Carmen (Lola Dueñas, "Talk to Her," "Volver") and Teresa (Nuria Solé) to help. Maria gets the job and soon Jean-Louis is exploring upstairs, wishing to see her room. When he discovers their shared toilet has been plugged for years, a plumber is called. Soon he's letting them make long distance calls, helping an abused wife relocate and educating them on financial issues. Each one of the Spaniards has her own flag to fly. Dolores is sending her money back home where her husband, Ferdinand, is building her a house complete with a marble tub with gold faucets. Carmen is a Communist, the hardest to win over. Pilar is the one who moves, throwing a joyous paella party which Jean-Louis is swept along for. Teresa marries the owner of a salon. Maria has a secret which causes her to vanish one day, breaking Jean-Louis's heart. And here is the sticky wicket. The sight of a nude Maria ignited a spark in Jean-Louis who seduced his surprised and appreciative wife, so why does Le Guay then make a hairpin curve and go the obvious route that was laid out before? It's not only cliched, it doesn't really make sense. When she's introduced, Suzanne is very unlikable, but she seems to undergo her own metamorphosis after exposure to Maria and becomes kinder, gentler and empathetic. To what end? The Joubert children Bertrand and Olivier arrive home from school for no other reason than to display more entitlement. The film's coda may be sweet, but it comes from left field. The film is well acted, although Luchini's character doesn't so much evolve as snap to, more a fault of script and direction. Of the Spaniards, Concha Galán is the most endearing, Dueñas the most intriguing.

Set in the early 1960s Paris, “The Women on the 6th Floor” is a lighthearted bit of fluff that, due to its cast, writers and director, Philippe Le Guay, turns out to be a real period charmer. Jean-Louis is happy with his life where others are paid to do his bidding. When his surly French maid walks out on him and his family, Suzanne, on the advice of her equally snobby friends, decides to hire a Spanish, rather than French, maid. Enter Maria Gonzalez and the Joubert household is about to go through big changes. Jean-Louis is charmed by Maria and the other Spanish maids living on the 6th floor of the building he owns and, when he sees the conditions they live in – almost monastic compare to his opulent digs. – decides to help the women. This puts him at odds with Suzanne and she throws him out. But, the women take him in and treat him like a king. He, in turn, treats them like queens, much to their delight. The strong chemistry between Fabrice Lucchini and Natalie Verbeke, as Jean-Louis and Maria, makes their relationship one that garners sympathy. Sandrine Kiberlain, as Suzanne, is anything but sympathetic with her selfishness, snobbery and need to control her husband. The actress does a marvelous job of it and you like to loathe Suzanne. The other Spanish women on the 6th floor are a joy with Maria’s auntie, Conception (Spanish star Carmen Maura), leftist Carmen (Lola Duenas) and the rest creating a homey, loving atmosphere I would want to live in. Philippe La Guay does an outstanding job in giving this ensemble’s entire mostly-femme cast full dimension. The Spaniard women’s love of life versus the French dourness makes this a fun flick that makes me want to see more of these people’s lives.