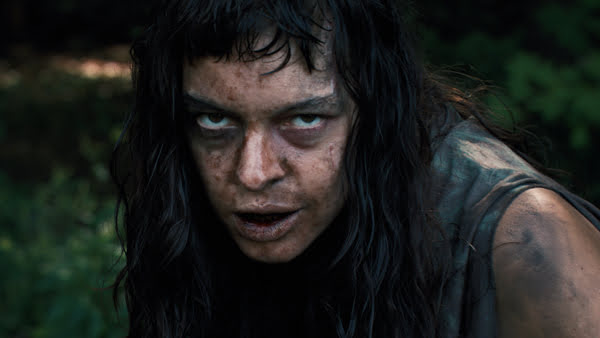 The Cleek family is a seemingly normal middle class clan living on the secluded edge of town. Dad, Christopher (Sean Bridgers), is an avid hunter and, one day, he sees in his scope something unbelievable – a feral woman (Pollyanna McIntosh) living and hunting in the woods nearby. He decides that she needs to be saved and hatches a scheme to civilize “The Woman.”

The Cleek family have a relatively normal surface veneer, but if you observe closely, something's not quite right. We get our first indication something's off at an outdoor neighborhood party when middle child, teenaged Brian Cleek (Zach Rand), does nothing to stop a little girl from being seriously bullied by a group of his peers. Then there's mom Belle (Angela Bettis, "May"), a shyly smiling Stepford Wife. Open the door to the Cleeks' own home and while a familiality remains, it's falser still. Then dad Chris (Sean Bridgers, HBO's 'Deadwood') goes hunting one day and traps and shackles "The Woman." The controversial Sundance film which caused walkouts and fainting is actually a black feminist satire that throws some hard punches at its own throat. Cowriter (with horror novelist Jack Ketchum)/director Lucky McKee ("May") has made a film that involves shackling via winch, staple guns, power washers, rape and even a touch of cannibalism but he nonetheless does so with enough restraint to get his points across without descending into sadistic exploitation. McKee even can elicit surprised 'Ha!s' from things one wouldn't expect to laugh at. The first guffaw occurs when Father Cleek lasciviously watches The Woman (Pollyanna McIntosh, "Land of the Lost," "Burke and Hare") washing in a river through his gun sight. Suddenly she spears a fish and takes a bite out of the wriggling catch. This one's going to be tricky, so Chris comes back prepared. Meanwhile he instructs his family to clean out their survival shelter before dinner. When he proudly shows off his catch to the family, telling them how he intends to 'help' this feral creature, reactions are mixed. Brian has a dangerous gleam in his eye ('Can we really keep her?'). At dinner, Belle and daughter Peggy (Lauren Ashley Carter) send us further warning signals with their quiet, cowed behavior. Young Darlin' Cleek (Shyla Molhusen), a self-absorbed chatterbox akin to "Welcome to the Dollhouse's" Missy Weiner, seems to accept all this as normal. Only Brian hears his father's retaliation for The Woman's initial attack on him (an amusing bit of gore capped with satiric exclamation point) and the two men are obviously on the same wavelength. When Belle actually gets up the courage to speak her mind in the form of a deferential question, the violence with which Chris responds is brutally swift and forgotten by him in a split second - the facade will go on (this sequence is so brilliantly timed it looks like a third person was involved in the actual action). In fact, McKee's film is full of the unexpected, be it reactions, plot twists or merely timing, all of which elevate "The Woman" above the mire of most its genre. Peggy has a secret that will be sussed out by her teacher, Genevieve Raton (Carlee Baker), with unsettling implications and unfortunate results and Chris's frequent orders to his son to feed the dogs has a climatic revelation. Like films which imply that the insane are running the asylum, "The Woman" questions the civilization of the civilized with their 'family values' and assigned gender roles. Religious extremism is also targeted when one character comments that another 'looks like one of those polygamist wives.' Women stand by women in "The Woman," at least until the herd needs culling of its weakest, nature's design for survival of the fittest. The cast is terrific. Scottish actress McIntosh, who resembles Milla beneath her organic grime, gives a fierce, physical performance with a guttural voice a step between human and Mercedes McCambridge's "The Exorcist" vocals. Speaking of lookalikes, Sean Bridgers could be a younger Will Ferrell and that alone aids the character's jaunty pretend wholesomeness. There's a great bit of eye to eye communication between McIntosh and Bettis that says more than the characters' manufactured and guarded dialogue. Shyla Molhusen is a hoot and a half. The movie still isn't for all tastes - for all McKee's restraint, many scenes still shock. But from the early goings, the director's offbeat tone and left field surprises always have the calming influence of being in good hands. "The Woman" is thinking man's horror.