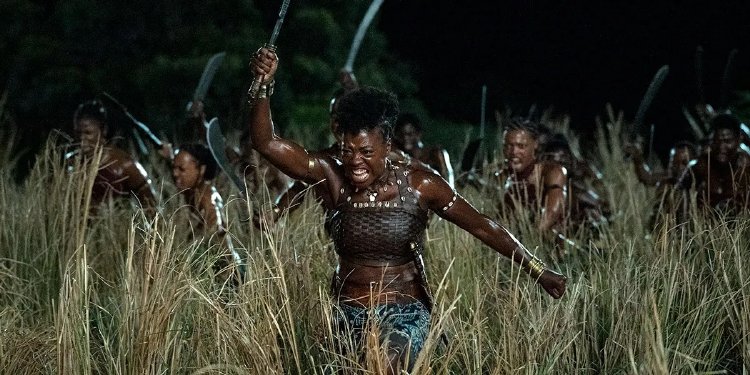 In the early 1800’s the African kingdom of Dahomey was fighting for its life against a more powerful neighbor. But, the king has an ace up his sleeve: The Agojie warriors. The enemy is not prepared for an army of women who can best their best ion “The Woman King.”

In the early 1800’s the African kingdom of Dahomey was fighting for its life against a more powerful neighbor, the Oyos. But, the king has an ace up his sleeve: The Agojie warriors. The enemy is not prepared for an army of women who can best their best in “The Woman King.”
Gina Prince-Bythewood directs the story by Dana Stevens and Maria Bello (yes, the actress) and it, to me, is what the makers of the “Black Panther” franchise envisioned but without the lavish CGI of the MCU. That said, what the film does is present the based-on-fact story of genuine Amazon warriors – the Agojie of Dahomey.

Viola Davis leads the femme army in their war to stop the slave trade in their country and begin the commerce of palm oil with the British, who had recently abolished the slave industry. We get, in the history lesson, a modern, contemporary look into the early days of the European colonization of Africa. It is not pretty.

The strong – just watch the action the ladies pull off - and talented femme cast give a performance, with the carefully choreographed battle scenes, that rivals the best CGI fighting in the Wakanda franchise. Viola Davis, especially, pulls off the copious action as the title character, warrior-leader Nanisca, with convincing ease, as do her fellow femme fighters, Nawi (Thuso Mdebu), Izogie (Lashana Lynch) and Amenza (Sheila Atim). Here, men are more objects than subjects in this gender reversal story.

At two hours and 15 minutes running time, a length that has become the norm than the exception in movies now, I found it too long. While the fight choreography is first rate, there is more to an action movie than just action and “The Woman King” simply overdoes it. A tighter use of editing and an avoidance of action to excess may have been wiser. I found that the film could have been 20 minutes shorter, easily.

I applaud the femme-focus of “The Woman King” and its depiction of strong-willed, strong-bodied women who earned their place of power.

The DVD comes with a variety of extras – an audio commentary track by director Gina Prince-Bythewood and editor Terilyn A. Shropshire, two featurettes, audition videos and previews.

"The Woman King" was made available digitally on 11/22/22 and is being released on DVD and blu-ray by Sony Pictures Home Entertainment on 12/13/22.