The Woman in Black 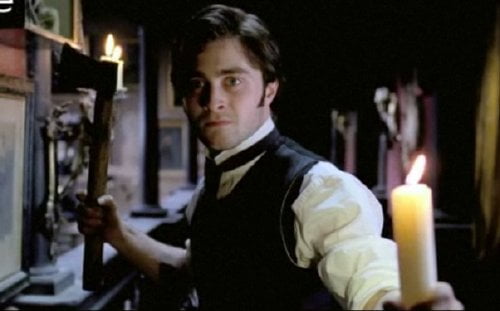 Widowed lawyer Arthur Kipps (Daniel Radcliffe, the "Harry Potter" series) is still dealing with his own grief when he's sent to a remote village to arrange for the sale of Eel Marsh House whose owner is recently deceased. He cannot help but notice that all the townspeople are acting strangely and clearly desire his return to London. He uncovers their secret - his client's home is haunted by a dangerous ghost, "The Woman in Black."

CBS Films has given this, Daniel Radcliffe's first big project post-Harry Potter, a huge marketing push with multiple posters and teasers tantalizingly asking 'What Did They See?' and director James Watkins ("Eden Lake") clearly knows his way around building creepy atmosphere, but he also suffers from a lack of restraint and a story (screenplay by Jane Goldman ("Kick-Ass," "The Debt") from the Susan Hill novel) that, in the end, fails to hold water. For the curiosity seekers, Radcliffe is fine in his first truly adult role, perfectly credible as a father of a four year-old, but this isn't the type of material which gives one much opportunity to stretch one's acting muscles either. In the end, "The Woman in Black" is most notable for its locations and gloomy, gothic production design (Kave Quinn, "Trainspotting," art direction by Paul Ghirardani, "Brighton Rock"). The film begins with a prologue in which three little girls interrupt their tea party to jump out of three matching windows from their attic room. We are then transported to London, where Kipps is haunted by the wife (Sophie Stuckey) he lost in childbirth four years earlier. His young son Joseph (the adorable Misha Handley) draws him pictures which show his mama as an angel in heaven and his father with an upside down smile. Given his assignment, Kipps is proffered sympathy for his lot but told in no uncertain terms that closing up the Drablow estate is his last chance to retain his position at the law firm. Kipps meets the affable Daily (Ciarán Hinds, "The Debt") on the train and is offered a lift to his lodgings at the Guilford Arms, but the owner, Fisher (Shaun Dooley, "Eden Lake"), immediately informs him that his reservation was never received and that the Inn is full, an obvious untruth. Mrs. Fisher (Mary Stockley, "Pierrepoint: The Last Hangman"), though, asks if there isn't anything that can be done and Kipps is offered the attic room - that room from the prologue - those three girls belonged to the Fishers. The next morning when Kipps goes to meet the local lawyer, Mr. Jerome (Tim McMullan, "The Queen"), he's told his trip was unnecessary, given an envelope of paperwork and told that his bags are awaiting outside in a carriage already paid to take him back to the station. Kipps, for an extortionate rate, convinces the driver, Keckwick (Daniel Cerqueira, "Sixty Six"), to take him out to Eel Marsh House which sits on a tidal island (like France's Mont Saint-Michel on a smaller, spookier scale). This means, of course, that Kipps will be cut off from the mainland when the tides come in. This first third of the film is its most effective, despite its obvious parallels to Dracula (the lawyer in love with his wife leaving to settle real estate being taken to a spooky manse in a gloomy carriage when no townspeople will cooperate). The house is beautifully appointed in dark burgundies, rooms overstuffed with Victorian ornamentss and foreboding portraits in heavy gilt frames. Keckwick explained how the young Drablow boy drowned in the marsh and his room is full of creepy dolls and windup toys with realistic glass eyes and feral porcelain teeth. Watkins allows the audience to view the titular subject hidden in shadowy corners or her threatening shadow looming over Kipps and it is effective. But Kipps doesn't stay the night - he's picked up by Daily for dinner with his wife (Janet McTeer, "Albert Nobbs") and the film becomes overwrought. The Dailys have also lost a son and the Mrs., who appears to be able to channel the dead boy when she's not doting over her 'twins' (Boston terriers treated as infants), has gone over the edge. Between her ramblings and Kipps's own experience the next day with a local girl who dies in his arms he learns the town secret and the film begins to lose steam. First of all, the ghost's vengeance is misdirected. Secondly, the extremes the townspeople have gone to would have been more easily remedied by picking up and leaving. Then there's Kipps's decision to stay the night at Marsh house. The tasteful horror Watkins evidenced in the first act is thrown out the window for a series of escalating frights that has Radcliffe running upstairs, downstairs, outside, around the bend and back again. There's an occasional eerie gruesome glimpse, but Watkins increasingly resorts to cheesy jump out scares at a ridiculously frantic pace. The film wraps with one of those 'gotcha' tricks that works until you start to think about it (and bears no small debt to a recent Sam Raimi movie). Yet for all its faults, this production from the reborn British Hammer label is true to its roots and at least different than recent average horror fare. Radcliffe, though, would be well advised to leave the paranormal behind for a while.