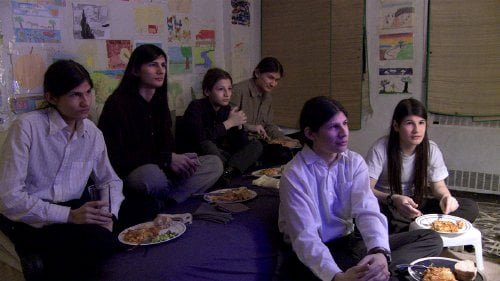 The Angulo family – dad, mom, six sons and a daughter – has lived for many years in a rent-controlled apartment on the Lower East Side of Manhattan. That is not remarkable. What is remarkable is that the family has been living in the father-enforced prison where, for nearly two decades, they have ventured out into the city only once or twice a year, if that. Filmmaker Crystal Moselle is given unprecedented access to the eccentric family, with the boys known as “The Wolfpack.”

Since 1996, the Angulos and their seven children have lived in an apartment in Manhattan's Lower East Side. Fearing for their safety, Peruvian father Oscar forbade them from leaving the apartment, their education attended to by their mom Susanne, a former hippie from Michigan who met her husband on a trek to Machu Picchu. When middle child Mukunda rebelled, escaping from the home in 2010, things began to change and he and his five brothers began to experience the outside world as a group dubbed "The Wolfpack." When fledgling director Crystal Moselle ran across this group of unusual brothers, she found all the elements for her first film. The Angulos are a fascinating subject, the family encompassing everything from long held radical ideology, abuse and the magic of movies. But although we (very) occasionally hear Moselle ask a question from behind her camera, her largely observational work leaves too many unanswered questions. We first get a sense of the six as they recreate "Reservoir Dogs" in their cramped apartment. All are dressed in black suits, most with flowing dark hair (in fact, it is difficult to get a sense of all six as individuals). We learn that while dad discourages interaction with the real world, he's brought home enough tapes and DVDs to build an extensive library. The Angulo boys are so movie mad they've learned entire scripts (many have been painstakingly transcribed), created props from cereal boxes and reshoot their own versions. One brother's laid claim to Batman, another (or the same?) embraces Halloween, the family's large collection of costumes and props coming in handy. The Angulos don't go in for generic witches, but dance around a straw column as horror's edgier personas, lighting a fire in the middle of their apartment (with mom's collaboration). It is remarkable how well educated these boys are (we barely see sister Visnu), and how well adjusted, even as they report how some years they'd be allowed out once, others three times, others none at all. Dad believes he's rebelling against the state by choosing to not work, instead spending most of his time lying in bed, leaving us wondering just where all the food, clothing and movies come from, not to mention shelter. Incredibly, it's not until Moselle begins to talk to mom that evidence of fear comes into play - she's clearly in an abusive relationship, although won't say as much, even though she admits that her movements are dictated by Oscar as well. It's also strange that the family never seem to have had any kind of outside intervention, at least until Mukunda chose to wear a Michael Meyers mask on his first solo sojourn, drawing attention from authorities when nervous shopkeepers reported him (he ended up in a psych ward). By the end of the film, Moselle's accompanying the siblings outside. A trip to Coney Island finds them on the beach in their suits and black shoes. Suddenly Govinda, the most independent of the siblings, has a girlfriend, Chloe, who participates in their indoor filmmaking. By the time we leave them, even Oscar and Susanne are outside, walking hand in hand. But just how has this imprisonment really affected this family? These boys seem to be able to function perfectly well, all showing signs of healthy, creative futures. They're extremely supportive of each other and their mother. Relationships with dad, particularly Susanne's, are more complicated (she calls Michigan relatives on camera and it appears to be the first time she's spoken to them in decades). Moselle appears to have assimilated herself a bit too deeply into this family, observing her wolfpack from the inside out when an outsider's perspective would have achieved more balance. Grade: