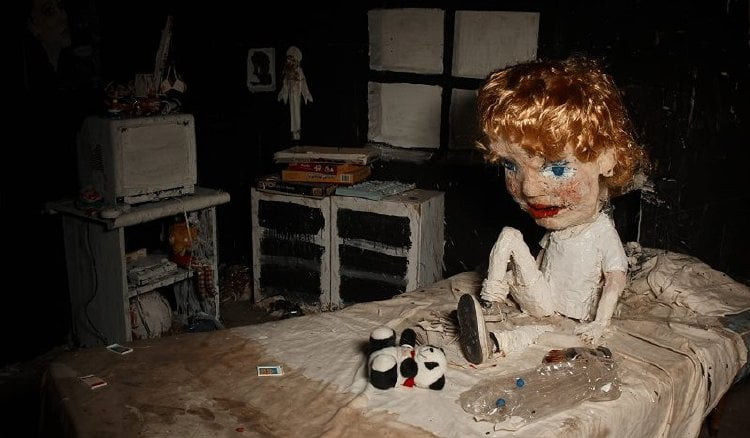 After World War II, a group of emigrant Germans created an isolated colony in Chile called Colonia Dignidad.  While propaganda films reflected an idyllic life of farming, the colony particularly famed for its honey, was, in reality, a dangerous cult which became increasingly infamous for internment, torture and murder during the Pinochet regime of the 70’s while under the leadership of German fugitive and accused child molester Paul Schäfer.  Cowriter (with Alejandra Moffat)/directors Joaquín Cociña and Cristóbal León take us on a surreal, nightmarish journey into the mind of María (voice of Amalia Kassai), a young girl facing punishment for letting three pigs escape, in “The Wolf House.”

Simply put, this mind blowing, multi media stop motion animation is like nothing you have ever seen before.  The filmmakers wisely begin their work with one of Colonia Dignidad’s vintage propaganda films, its narrator hoping to dispel horrible rumors, before we hear the voice of a young girl, Maria, desperate not to face punishment again.  Because three pigs escaped, she is facing 100 days in solitary.  She tells us she has slipped away into the woods, where she finds a house, welcomed in by two pigs she names Ana and Pedro, but the Wolf (voice of Rainer Krausse) is always present outside.

The film is shot as a virtual one take within a constantly evolving house whose inhabitants continually change as the Wolf calls ‘Maria.’  We appear to be within the subject of mind control, Maria’s personality being broken down and reshaped.  The technical aspects of the film are extraordinary, papier-mâché puppets (which evolve into wood, cloth, and hand drawn animations upon the walls they inhabit, none created by computer) moving about an environment that shifts beneath them, at one point burning down (Maria uses the Colony’s famed honey to treat Ana and Pedro’s burns).  We catch a glimpse of a swastika that evolves into a four-paned window.  Ana and Pedro’s hooves turn into hands and feet before they turn into a boy and a girl, Chilean natives we would assume from their darker coloring.  Christmas is celebrated with a decorated tree, Maria gifting Ana and Pedro with clothes.  In a place Mengele reportedly visited, we watch as the ‘stupid brown’ children become blond and blue-eyed.  Together with Maria, they form the German ideal of a Christmas choir lit by the golden glow of a candle, their angelic voices harmonizing.

But that harmony is short-lived, Pedro and Ana eating jam while denying it to Maria.  She is having trouble breathing, she tells us, as we see her tied down.  Pedro, attired in lederhosen, watches as his hands grow into spiky tree limbs.  The children are found ‘after an incessant search.’  From what we have observed, this is far from good news.  Three innocents are now in the grip of Fascism at its most perverse extremes.  With their first feature length film, Cociña and León have broken new ground, combining the tale of the Three Little Pigs with psychological breakdown within the little known history of Colonia Dignidad.  It is extraordinary.

Young Maria (Amalia Kassai) has run away from the secretive Colonia Dignidad (German Colony) in a remote part of Chile. She finds a house inhabited by two pigs and she settles in to take care of them. But, there is a wolf outside their door and he wants to get in to “The Wolf House.”

Long-time animated short creators Joaquin Cocina and Cristobal Leon make their feature debut with an animation that it is a visually brilliant work. Yes, there is a story here, in part the tale of the Three Little Pigs and the Big Bad Wolf and, if you can tear your eyes from the innovative and masterly animation, it is an interesting, complex and attention-getting yarn.

I found, as I watched “The Wolf House,” a feeling of giddiness as the various animation techniques shift and change to move the story forward. As it shifts from line drawing to papier-mâché to using dolls and other anime techniques, the story morphs, too, as the characters physically change and the two little pigs become into pig-men then blond and blue eyed children.

This may sound just plain weird but the filmmakers tell a coherent story – look up Colonia Dignidad if you want to learn about weird – and stretch their artistic wings with a feature animated film that will be high on my list come year’s end.

"The Wolf House" is screening at the virtual theaters listed here.