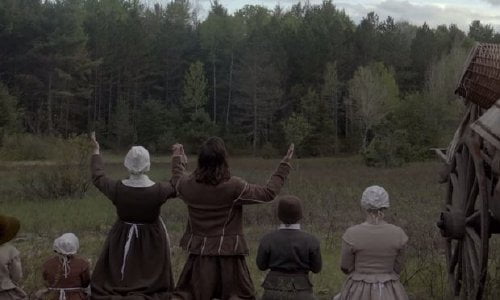 In 1630, English farmer William (Ralph Ineson, "The Selfish Giant") leaves his colonial plantation after locking horns over religious interpretation. He, his wife Katherine (Kate Dickie, "Red Road") and their five children make a new home at the edge of a forest. But his crops fail and their black goat becomes oddly aggressive. When infant Samuel disappears right from under eldest Thomasin's (Anya Taylor-Joy, TV's 'Atlantis') nose, the adults talk of wolves but the children believe in "The Witch."

Writer/director Robert Eggers, a production designer making his feature filmmaking debut, has made a masterpiece right out of the gate. This production is absolute perfection in every regard, from its well researched screenplay and art direction to its great ensemble cast and unnerving score (Mark Korven, "Cube"). "The Witch" is the rare Sundance hit that deserves all of its hype. There are intimations of the sin of pride in William's response to the plantation Governor threatening him with banishment, yet we soon also see that he is a deeply religious, good and loving man. As the family leaves, their possessions piled on a wooden cart, Katherine appears anxious. When they arrive at flat land with a water source on the edge of a forest, the entire family raises their arms in thanks, towards the woods. They may have just announced their presence to the wrong place. Eggers has carefully built a family dynamic in his script. There is love, yes, but pull one string in an environment casting doubt at every turn and things begin to unravel. Katherine doesn't outwardly blame Thomasin for Samuel's fate (which, while unknown to them, Eggers horrifically suggests via knife blade and mortar and pestle), but she lashes out when Thomasin fails to corral the unruly twins. In turn, Thomasin tries to scare Jonas (Lucas Dawson) and Mercy (Ellie Grainger) into obedience by telling them that she is the 'Witch of the Woods,' a lie that will come back to haunt her. In turn, they insist they've been talking with their goat, Black Philip. With his crops failed, William takes second eldest Caleb (Harvey Scrimshaw, "Oranges and Sunshine") into the woods to hunt and trap, a place Katherine has forbade her children from, and the two lie rather than be caught out. Having gone once, Caleb convinces Thomasin to enter the woods once more, but he chases after their dog, hearing its distress, and Thomasin awakens alone on the ground, their horse gone. When he eventually reappears, nude, he is clearly in the grip of something evil. William's love of his daughter puts him at odds with his wife. Satan is adept at pinpointing human weaknesses. Eggers suggests horrors with spine chilling creepiness. How do the eyes of the hare William attempts to shoot appear so malevolent? The goat, Black Philip, has seemingly turned on most of the family and when Thomasin attempts to milk his she-goat, she is shocked by what appears. A silver wine chalice, Katherine's most prized possession, disappears. The woods rustle, the wind howls (sound design by Adam Stein), Korven's strings mimicking the caw of a crow. Caleb encounters a cottage in the woods sprung right from the pages of Brothers Grimm, its lovely inhabitant (Sarah Stephens) knowing of the adolescent lust that keeps bringing Caleb's gaze to his sister's bosom. Eggers based his story on folk tales and historical documents of the day, using language from witch pamphlets, court documents, Puritan diaries and the Geneva Bible used by Shakespeare and his archaic language is beautifully spoken by his cast, William telling Caleb 'I love thee marvelous well.' Ineson, a British character actor, is pitch perfect in this role, able to express love for his family from behind his serious countenance. He and Taylor-Joy anchor the piece, the two both making the most of breakout roles, both struggling with frustration, his at his inability to provide for his family, hers in gaining acceptance from Katherine. The aptly named Harvey Scrimshaw, found during a British casting search, stuns with his ability to convey both possession and religious fervor. Eggers directs the younger Dawson and Grainger into natural performances that nonetheless make us wary, rambunctiousness tinged with something suspect. Dickie is the opposite of the film's titular character, a woman suffering for her place in a man's world, yearning for her home in England, buckling under hardships, driven mad by played upon fears. Jarin Blaschke ("I Believe in Unicorns"), using a 1:66 aspect ratio that boxes characters in, achieves sepia tones via firelight. Authenticity to the period has been painstakingly applied, from the farm structure resurrected using Plimoth Plantation plans (production design by Craig Lathrop, "Stuck") to Linda Muir's ("Exotica") hand sewn costuming. With "The Witch," Robert Eggers has succeeded not only in bringing a modern audience to 17th century New England, but spellbinding us in the process. This is a major work. Grade: