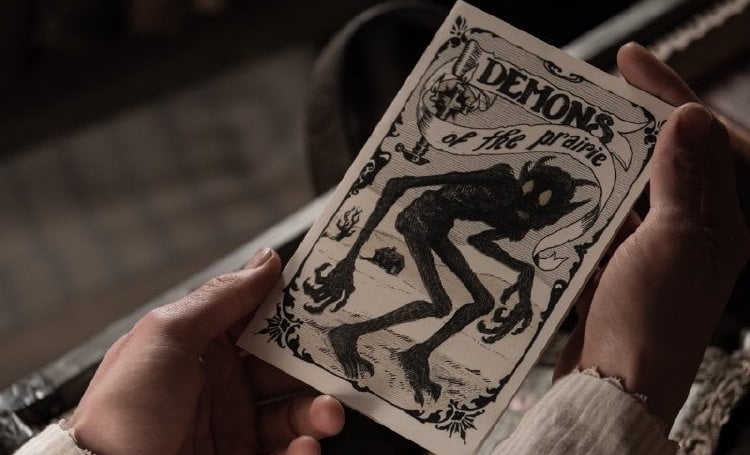 Jacob Macklin (Ashley Zukerman, TV’s ‘Manhattan’) is dubious about his wife Lizzy’s (Caitlin Gerard) fear of supernatural forces on the vast prairie where they’ve established their homestead. When a young couple settles nearby, Emma Harper’s (Julia Goldani Telles, TV’s ‘Bunheads,’ ‘The Affair’) pregnancy seems to make her, too, susceptible to evils that announce themselves in “The Wind.”

Back in 1928 Victor Sjöström made a silent film called “The Wind.” It starred Lillian Gish as a Virginian traveling to a remote Texas ranch who is told that the wind often drives women mad on the frontier. As recently as 2014, Tommy Lee Jones’s underappreciated “The Homesman” also addressed this phenomenon. Now screenwriter Teresa Sutherland explores the concept with demonic trappings, director Emma Tammi smartly using time shifts to distract from the tale’s final revelation while masterfully creating a tone of oppressive dread. The first thing we see is two men waiting outside a wooden home. The door opens and a woman in a blood soaked white shift, Lizzy Macklin, somberly walks out holding a bundle which she hands to one of them. The man screams. A woman with a horrible head wound is buried with her swaddled child. We next see Lizzie hanging laundry. We hear growling. Lizzie sees two snarling wolves and hurries back into her cabin. Jacob arrives with news of a new couple settling nearby, close enough to see a light from their cabin on the horizon and we soon realize these are the people from that opening scene. As Jacob helps Gideon Harper (Dylan McTee) with outdoor chores, Lizzie and the younger Emma get to know one another, at least as much as the reserved Lizzie will allow. A question about children creates an uncomfortable silence. Then things start to get really creepy. Flashing back as she moves forward, Tammi teases out details. Lizzy’s white goat meets a dubious fate, perhaps because of those wolves. Or does it? Jacob burns Lizzie’s pamphlet on ‘Demons of the Prairie,’ yet Emma appears to know their names. Lizzie admits a traveling Reverend (Miles Anderson) into her home then becomes alarmed by a slip of his tongue. Tammi, who cut her teeth on documentaries, has a strong command of her material, establishing a real sense of desolation and ‘something out there.’ Zukerman does the heavy acting lifting here, singing lullabies and chanting in the native German of her character, boldly confronting her one woman battle. “The Wind” blows us in one direction only to knock us over with what we don’t see coming. Grade: