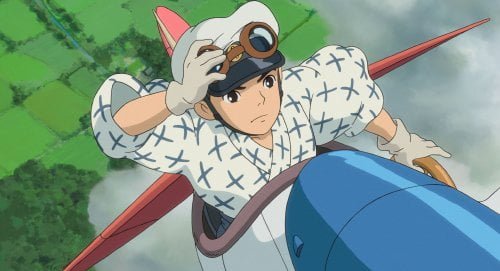 Jiro Horikoshi (Hideaki Anno) was the man responsible for the design of the predecessor of the airplane that was known and feared around the world – the Mitsubishi A6M “Zero.” Venerable anime maker Hayao Miyazaki brings us a partly fictionalized look at Jiro – his life, his work and his love – in “The Wind Rises.”

A young boy flies in a plane that looks like a bird. He tries to reach higher altitudes when he spies a threatening dirigible, but the strain awakens Jiro Horikoshi (voice of Hideaki Anno). As he grows up in post WWI Japan, his dreams of becoming a pilot are denied by poor eyesight, so he chooses the next best path, aeronautical engineering. But the young man who dreams of radical commercial air transport is hired by Mitsubishi where he will become the designer of the Zero, WWII's finest and deadliest airplane in "The Wind Rises." For his purported last film, writer/director Hayao Miyazaki ("Spirited Away," "Howl's Moving Castle") has tackled a significant first - an epic, animated biography spanning some thirty years - without neglecting the magical elements which have delighted his fans for decades. The film has been greeted with undeserved controversy claiming that Miyazaki is glorifying the inventor of a 'death machine,' and yet the film's anti-war sentiments are quite clear (as are its hero's). The smoking of cigarettes, ridiculously taboo in American period films these days, is simply a reflection of its time. "The Wind Rises" is also, unlike his last film "Ponyo," not aimed at children although older kids should find much to appreciate. The young man who speaks to Italian aeronautical designer Caproni in his dreams amuses his friend Honjo with his interest in the remains of his lunch, but later that mackerel bone will be evident in his inspired designs. Miyazaki does the same, Jiro's robe design suggesting a formation of planes in the sky. The filmmaker has a long tradition of flight in his films - broomsticks, castles - and even World War aircraft, as in 1992's "Porco Rosso." Everywhere the wind blows premonitions of change, be they romantic or the fortelling of tragedy. As the young Jiro travels by train, he makes a fortuitous meeting when the Great Kanto Earthquake derails it and he carries an injured young woman into town, back to her family. The young Nahoko trots beside them, admiring the quiet grace of this unassuming man. Years later, the company that recognizes his genius will send him and colleague Honjo to Germany (Miyazaki uses his character exchanges to define an uneasy alliance), then send Jiro onward, alone, to 'see the world.' Back at home, relaxing at a Magic Mountain resort, who should Jiro run into but Nahoko when the wind lifts the umbrella shading her while landscape painting. A wordly foreigner, Castorp, encourages the romance, Jiro wooing the young woman with paper airplanes sent to her balcony (the young woman suffers from tuberculosis). Back at Mitsubish, Jiro's engagement with Castcorp has apparently put him on a watch list, but he's protected by his grumpy boss Hirokawa (a classic Miyazaki character, short of stature, large of head) who will turn sentimental hosting the young man's wedding. The stricken Nahoko supports Jiro through the long hours perfecting his war plane, but the winds of change await on the horizon. Flights of fancy permeate the film, as Jiro catches up with his hero Caproni and their imaginations take wing. Equally fantastical are the real life events depicted, such as Caproni's realizaton of his nine-winged 100 passenger CA60 only to see it crash into Lake Maggiore on its first test flight. Listen carefully and you will notice that the mechanical sounds of chugging trains and whirring planes are made by human voices. The film is balanced with quieter moments - Jiro trying to give the sponge cake he's just purchased to distrustful, hungry children; Jiro hearing classical music drift from a German apartment; Jiro chain smoking at his window after a day of work. "The Wind Rises" is truly an extraordinary film, one that encompasses so much life and humanity one forgets one is watching something that was drawn. If engineers turn dreams into reality, filmmakers turns reality into dreams. Miyazaki is one of our finest dreamweavers. (The film is being presented in both subtitled and English dubbed versions. This review was based on the former.)