The Wildest Dream: Conquest of Everest 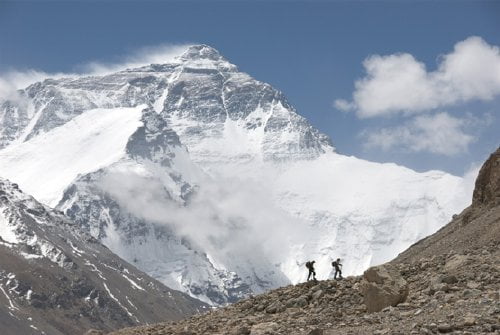 In 1924, British mountaineers George Mallory and Andrew “Sandy” Irvine attempted to climb the world’s tallest mountain – Mt. Everest. They were last seen only a few hundred meters from the summit and then disappeared. 75 years later, another expedition set off to find the long missing climbers and one of the searchers, Conrad Anker, made the discovery in “The Wildest Dream.”

In the 1920's after fighting in WWI, George Mallory, inspired by those who'd traveled to the Poles, decided to become the first to climb the world's highest mountain, Everest, famously explaining 'because it was there.' He was last seen with his climbing partner, Sandy Irvine, 800 feet below the summit. Seventy-five years later, climber Conrad Anker saw something white during his ascent on Everest that was not snow. He had found Mallory's body, intact and frozen while attempting "The Wildest Dream: Conquest of Everest." Director Anthony Geffen, an Emmy nominated producer, makes his directorial debut with this fascinating documentary that is part historical document, part conjecture. Featuring amazing camera work by Chris Openshaw ("Nature") and Ken Sauls "Ice Road Truckers," whose travails are not documented here, "The Wildest Dream" suffers from Liam Neeson's dryly academic narration, but comes alive through letters between Mallory and his beautiful, beloved wife Ruth (read by Ralph Fiennes and Neeson's late wife Natasha Richardson) and by Anker's extraordinary recreation of Mallory's climb. As Mallory's body has been left on the mountain, the film begins with a recreation of Anker's astounding discovery where an audit of Mallory's things produces perfectly preserved letters, but not the picture of his wife which he brought for to leave on Everest's peak as a tribute to his love for her. Writer Mark Halliley does a good job providing the background that formed Mallory's psychology and Anker makes sure we understand the hardship the man faced just getting to Everest back in the day, let alone attempting to climb it (it is amusing to hear about the cases of champagne and caviar considered necessary provisions in that oh so different time and place). He chooses a partner much like Mallory did, a climbing novice whose other skills complement his own (Irvine was a chemist who understand the technical details of their altitude equipment). They recreate the clothing they wore and use it for part of the climb. They explain how no man was known to reach the summit via this route until the Chinese bolted a ladder to the second step, a climb they intend to make unaided. This knowing 'recreation' is more effective storytelling than the more literal type as used in "Touching the Void." Anker's attempt is breathtaking on its own, but the Geffen's film suffers from a sense of inconclusiveness. It would have been far more intriguing if the filmmakers had applied some historical forensics to Mallory's body position and condition. Proving Mallory's route was humanly possible is one thing, and certainly visually spectacular, but Geffen (and Anker) could have dug deeper into whether he actually made it or not, even if they couldn't prove it. (Irvine's body, which could provide the answer, has yet to be found.) Still, "The Wildest Dream: Conquest of Everest" is a welcome document of man's quest for the seemingly impossible and Mallory's struggle between love for his wife and family and Everest's pull gives it an emotional dimension.

Sir Edmund Hillary conquered the world’s tallest peak on 29 May, 1953. Since then, there have been a number of movies, fact, fiction and recreation, about the famous mountain and those who try to climb her. Documentary filmmaker Anthony Geffen and writer Mark Halliley create a dual story – one, about George Mallory and Sandy Irvine and the uncertainty of whether they made the summit or not; the other follows Conrad Anker and his incredible discovery of George Mallory’s remains and his subsequent attempt, with climbing partner Leo Houlding, to recreate Mallory’s climb up the dangerous mountain. Mallory’s ascent route is the toughest on the mountain and has never been climbed. Ankers adds to the challenge when he decides, during the hardest part of the climb, to use recreated climbing gear from Mallory’s day to see how and if it works. It is an amazing challenge within an amazing challenge. Anthony Geffen and his docu team collect an incredible amount of archival film footage, photos and correspondence of the time, in general, and of George Mallory, in particular. “The Wildest Dream” shows film footage of one of the attempted climbs prior to Mallory’s last and is astounding in its insight and detail. The companion climb, documented by Geffen and his cameramen,follows Anker, Houlding and their base camp team, as they make their way to the final ascent. Photography puts you in the action as the cameras follow the intrepid climbers, making me really admire both in front of and behind the camera effort. All aspects of this documentary make it a solid, exciting true story.