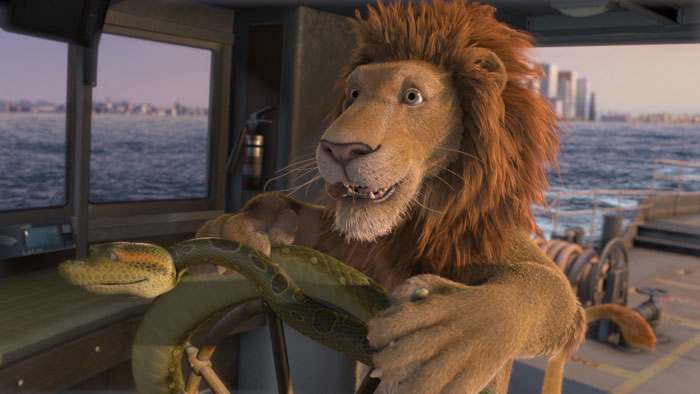 Samson (voice of Keifer Sutherland), the lion king of the Bronx Zoo, entertains his cub, Ryan (Greg Cipes), with stories about his days ruling the roost in Africa. Ryan wants to be just like his dad but hasn’t, yet, found his roar. Samson tells him to be patient but the lad knows that the only way he will develop his own ferocious growl is to get to “The Wild.”

The Wild,” in addition to lion cub Ryan’s desire to find his roar, starts out, when the last of the tourists and keepers leave for the day, with the denizens of the Bronx Zoo taking over the place. The big event that all the animals attend is a curling contest between the penguins and Samson and his team – a street-wise New York squirrel named Benny (Jim Belushi); the zoo’s merchandise star, a koala called Nigel (Eddie Izzard); the quick-witted and pragmatic giraffe, Bridget (Janeane Garofalo; and, the slow-witted but willing 21-foot long anaconda, Larry (Richard Kind). This portion of “The Wild” has nothing to do with the story and eats up a considerable amount of the film’s 85-minute run time. Once this extended bit is finished, “The Wild” finally gets to its point. Ryan, wanting to return to his dad’s roots, gets out of the zoo and falls asleep in an animal-shipping container on the lot next door. Samson, when he realizes his son is missing, goes into a panic and frantically searches for his cub. He locates the boy but is too late as he helplessly watches the container get hauled away. Samson may be king of the zoo but he is woefully unprepared to go into the city to find his boy. Benny, the street-savvy squirrel, steps in and, with the help of some local pigeons, finds out where the container is heading – to the docks to be shipped back to Africa. Samson and his team set off across the city to save Ryan before the ship sails. But, again, they are too late as they watch the freighter, with the container on board, pull away from the dock. Ever resourceful, Samson and the rest take over a tugboat and set off in pursuit. The chase will take them all the way to Africa. Further adventures ensue when a gang of wild wildebeests decides, at their leader Kazar’s (William Shatner) insistence, that they stop being prey and become predators, endangering Ryan and Samson’s lives. As I watched “The Wild,” especially hearing Keifer Sutherland give voice to Samson (he channels Albert Brooks), all I could think of was the far superior Finding Nemo (2003).” A father’s search for his missing son is the same premise for both animation features but the earlier film benefited from much better, more imaginative writing (by animation veteran Andrew Stanton who penned such other great anime as Toy Story,” Toy Story 2” and “Monsters, Inc.” and also directed “Nemo”). With “The Wild,” visual effects supervisor Steve “Spaz” Williams (“Spawn,” “The Mask,” Terminator 3”) takes the helming reins but lacks the story telling skills to engross the viewer. The result is a film that will appeal to younger kids but fails to reach that important demographic, “for all ages.” Having a visual F/X guy at the helm does make for an interesting film to look at. ”The Wild” does a credible job in creating detailed, though cartoon-like, creatures – and there are a lot of them – that look great. Unfortunately, the story, by a slue of writers (Ed Decter, Mark Gibson, Philip Halprin and John J. Strauss), feels like it was done by a committee and has few laughs. (Well, maybe a chuckle or two but not much more.) I found myself sitting, stone faced, as the “jokes” fell flat, making “The Wild” seem far longer than it is. The talents giving voice to all the critter in “The Wild” is impressive but has some problems. Keifer Sutherland and Greg Cipes, the most prominent voices in the film, lack any luster in their characters. Both are overshadowed by the sidekick voices by Garofalo, Izzard, Kind and Belushi, who do their best with the weak dialog and weaker jokes. Patrick Warburton gives distinctive and amusing voice in the relatively small role of Blag, Kazar’s lieutenant. The Wild” is the kind of film that is better left to video rental. It lacks the charm and humor of the other CGI animations mentioned and only the kids will take to it. My recommendation? Watch “Finding Nemo” again.