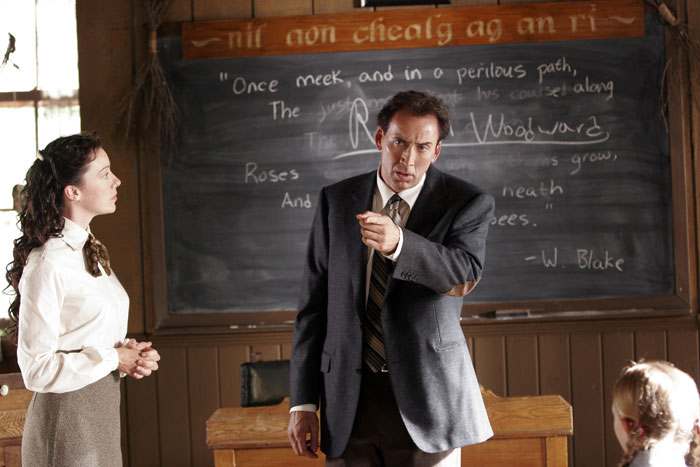 After Edward Malus witnesses the fiery deaths of a mother and her young daughter, the depressed policeman receives a plea about another little girl in jeopardy. Rowan is the daughter of the fiance, Willow, who suddenly abandoned him years earlier and dual mysteries pull him towards a date with "The Wicker Man."

Director Neil LaBute ("The Shape of Things") who hasn't made a good film since 2000's "Nurse Betty," continues his downward slide rather spectacularly with "The Wicker Man," a hairbrained 'reimagining' of the British horror classic featuring the worst performance of Oscar winner Nicolas Cage's ("World Trade Center") career. The best outcome for this film is in its potential as a camp classic. The highway trauma LaBute begins with is ripped right out of the opening moments of "Final Destination 2," a lowbrow genre flick with more real chills than anything present here. After receiving a note that looks like it was created in a calligraphy class, Ed jumps on a ferry to head towards Summers Isle in a sequence that owes a lot to "The Ring." A sea plane pilot (Matthew Walker, "Alone in the Dark") has to be bribed to take Ed to the private island, where he is greeted by a trio of women costumed in Laura Ashley Amish. None profess to know the girl in the photo Ed will brandish wildly all about the island, but they have a good laugh at his expense over his bemusement with the unknown contents struggling from within a leaking burlap sack. Strapping Sister Beech (Diane Delano, "Jeepers Creepers II's" bus driver) runs the local inn (why does this island have an inn if no outsiders are allowed?) where Ed freaks out the locals by killing a bee attracted to the mead he's been served (he's allergic - guess what he has to look forward to) and where serving lass Sister Honey (Leelee Sobieski, "The Glass House") flirts while brandishing an axe. When he hooks up with Willow, who is painted as the wild child who once dared to leave the colony, she's not much help. Kate Beahan ("Flightplan") whose bee-stung lips give Angelina's a run for her money, is both a facial and nominal pun for the isle's chief industry - bee keeping. Ed's encounters become increasingly odd as he clashes with schoolmistress Sister Rose (Molly Parker, HBO's "Deadwood") ('You're all liars!' he screams at a classroom of little girls with a straight face), finds evidence of sacrificial rituals at the home of Dr. Moss (Frances Conroy, HBO's "Six Feet Under") and awakens at the home of self anointed goddess Sister Summersisle (Ellen Burstyn, "Divine Secrets of the Ya-Ya Sisterhood") herself. The film turns laugh out loud funny when Cage demands 'Step - away - from - the - bike' while pointing a big gun at its petite rider and the giggles grow louder when he screams 'My legs!' as something presumably horrible happens off screen. Cage's unrestrained hysteria begins too early and too intensely to ever be taken seriously. Equally awful is Beahan, who spends the entire film furrowing her brow and Burstyn simply should have known that any film that required her to make up like Mel Gibson in Braveheart and run through fields flapping her arms was a bad move. The usually reliable Parker is as wooden as the film's titular structure, but Delano delivers some hearty wickedness. Francis Conroy enjoys some out there weirdness and Sobieski, who's been missing from the big screen for far too long, is quite unsettling. In addition to these three worthwhile performances, the film is undeniably beautiful, with its stone cottages and English country gardens all set amidst the lush greenery of the Pacific Northwest. Cinematographer Paul Sarossy ("Where the Truth Lies") also has a talent for capturing his subjects' eyes with an eerie luminosity that is quite striking. But the filmmakers miss a great opportunity to unsettle with art direction (Michael Diner, "The Fog") - when Edward sneaks into the home of Dr. Moss, he finds a lab filled with fetuses floating in formaldehyde, and yet it is too subtly implied that the isle's men are mute because their tongues have been removed. A couple of tongues among the glass jars would have been, well jarring. The original, 1973 version of the film was a psychological chiller, a study in contrast between the strict religious background of an outsider and the naturalistic worship of those whose secrets he seeks. LaBute's version, which will only add to his misogynistic reputation, is just ridiculous.