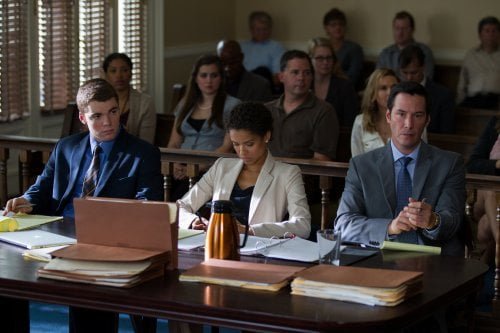 Mike Lassiter kneels over the body of his father, Boone (Jim Belushi), a knife protruding from his lifeless form. His mother, Loretta (Renee Zellweger), walks into the scene as Mike says: ”Should have done this long ago.” Family friend and attorney Richard Ramsey (Keanu Reeves) promises Loretta that he will keep her son from going to prison but may not get to “The Whole Truth.”

But, the case is going to be a tough one for defense attorney Ramsey. His client refuses to talk, even to him, the man defending Mike. With this total lack of cooperation, for reasons unknown, Ramsey is hog tied as the prosecution parades witnesses before the court. The court proceedings, with the truth told not in black or white but in varying shades of gray, muddying the proceeds. The courtroom drama is peppered with flashbacks to the murder, Boone’s abuse of his wife, Loretta – even though I knew Zellweger was in the film, it took a few appearances by Loretta before I realized it was Renee, she looks that different after her cosmetic surgery – and, importantly, of his son. These scenes, with Belushi giving his abusive best, help form your opinion of the man, and it is not a good one. I like Keanu, despite all the criticism about him being a wooden performer, and he is good as the defense lawyer fighting for Mike’s life. The problem I have with the film is the plethora of macguffins and misdirection that, yes, keep you guessing but are confusing, especially with the big reveal at the climax of “The Whole Truth.” I love courtroom dramas like “The Verdict (1982)” and, even, the all star ham event, “A Few Good Men (1992)” – my guilty pleasure is Jack Nicholson‘s “You can’t handle the truth!” scene chewing. “The Whole Truth” lacks the sincerity of “The Verdict” and the flashiness of “A Few Good Men,” I think due to the straightforward but uninspired direction by Courtney Hunt, who blew me away with her debut film, “Frozen River (2008), and the often confused script by Rafael Jackson with its false leads and overly twisted plotlines. There is some good acting here but I thing the script done them wrong.