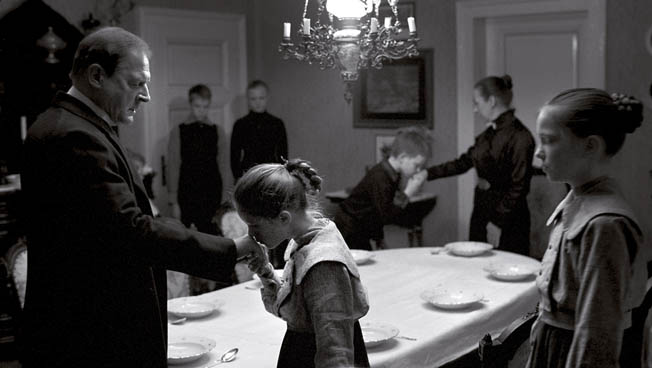 The former schoolteacher (voice of Ernst Jacobi, "The Tin Drum") of a small town in pre-WWI Northern Germany recollects the strange events, which began when the local doctor was set up to be thrown from his horse by a trip wire, in an attempt to shed possible light on his country's subsequent history. It seems the children of the village reacted in unanticipated ways to the various rules and teachings of their authority figures. When four of the Pastor's (Burghart Klaußner, "The Reader") five children return to their home after dark and past the dinner hour, he tells his eldest, Klara (Maria-Victoria Dragus), that he must reinstate an outward reminder of purity he thought she had outgrown - "The White Ribbon."

Cannes winning writer/director Michael Haneke ("Funny Games," "Caché") has been exploring the darker effects of society on human behavior throughout his career and, with "The White Ribbon," he has made one of his most chilling and thought provoking films. His decision to use voice over narration recalling events many decades after the fact and to film in black and white (cinematographer Christian Berger, "The Piano Teacher," "Caché") with natural light, make his film play like a historical fable, albeit one written by the Brothers Grimm. Haneke and his narrator take a natural path into their story, gradually revealing the hierarchy of authority and its explosive trickle down effect. When the doctor (Rainer Bock, "Inglourious Basterds") is thrown from his horse, he is attended to by his thirteen year-old daughter (Roxane Duran), who appears more horrified at the condition of the horse than that of her father. The doctor is sent to another town for some months of recuperation and Anna and her little brother Rudolph (Miljan Chatelain) are tended to by the next door neighbor, Mrs. Wagner (Susanne Lothar, "The Piano Teacher," "The Reader"), who also happens to be their father's attending nurse, the town's midwife and the single mother of Karli (Eddy Grahl), a sweet child afflicted with Down's Syndrome. A group of schoolchildren, led by the pastor's eldest Klara, arrive to offer Anna 'help.' (That these children will remind you of "Village of the Damned" has much to do with their mysterious conspiracy and Aryan appearance.) The town's inspector is perplexed by the disappearance of the trip wire which felled the doctor's horse, but no one claims to have seen anything, even though evidence of its once having been there remains. The doctor is one of the three most influential individuals, the other being the Pastor and the Baron, whose estate provides most of the townspeople's living. It is the Baroness who we meet next, however, perturbed because her young son Sigi is 'creeping around' unattended by governess or tutor as she plays piano. When a farmer's wife falls through floorboards from the upper floor of the Baron's sawmill and is killed, the farmer (Branko Samarovski, "The Time of the Wolf") and his eldest son (Sebastian Hülk) wrestle with the conflict between responsibility for the accident (the floorboards were said to have been rotten) and continuing employment. At a second tier is the Baron's Steward (Josef Bierbichler, "Code Unknown"), an older man with an eye for the younger ladies who enjoys the benefits of his position but is experiencing problems within his own household. As our eyes and ears, the school teacher (Christian Friedel) is an earnest but caring young man who is courting the Baron's governess, Eva (Leonie Benesch), a fresh faced sixteen year-old from a small town next to the one he is from. Given his exposure to the children of the town, events he witnesses (the Pastor's haunted looking eldest son Martin (Leonard Proxauf) 'testing' his goodness by tempting God to kill him) and confidences made to him (the Steward's daughter Erna (Janina Fautz) 'predicts' future calamity via 'dreams' which have come true in the past as regards her own infant brother) begin to add up with general events in shaping his suspicions as to who may have made horrific attacks on Karli and Sigi among other disturbing occurrences. I've barely skimmed the surface of all the little 'tells,' actions and development of character that Haneke uses to build his village. He uses a single, linear flashback and yet adds layers each time he revisits a character. We, the audience, only see the children commit three, somewhat lesser acts, ones where the perpetrator is revealed to adults (that the most disturbing, Karla's direct revenge on her father, is shown, cannot be explained from the school teacher's perspective however, especially given the Pastor's rejection of the teacher's theory, at least in words). Many questions remain unanswered, but the behavior and events do lead to a conclusion. Each of the authority figures is guilty of repressive ideology - the Pastor, whose eldest are ringleaders, believes he is doling out tough love - but there are worse evils to be found. Never has the phrase 'suffer for beauty' come from such a twisted place. Even the Baroness, whose own hands off approach to child rearing is but a symptom of her time and title, finds her husband's domain a place of malice, envy, apathy and brutality, threats and perverse acts of revenge. Perhaps Haneke's master stroke in rooting historical cause and effect is his calm before the storm, the harvest period where nothing happens because everyone is occupied - arbeit macht frei indeed. "The White Ribbon" is also a masterful technical achievement. Haneke has said that one of the reasons for his choice of black and white was as a cover for period details, but the film has been meticulously designed and cast. Hair, makeup and costume are alive while evoking old photographs. Berger's stunning compositions and a use of natural light that imbues a scene's meaning with psychological undertones, add immeasurably to the story, as does sound design. We find out about the farmer's wife as we view her naked body through a doorway from the waist down. The buzzing of flies is every so slightly prominent in the sound mix (and used twice more in a way that is both natural for its setting but disconcerting nonetheless). Figures come into and out of darkness throughout the film and the black circles under Martin's eyes as he talks to his teacher in the wood are made chilling by the light Berger allows to cross them. In the end, a major player, hysterical with knowledge not imparted, disappears, another occurrence which would become common in following decades. An angelic looking choir sings as the Pastor acknowledges the truth but does nothing. "The White Ribbon" is a gripping mystery and complex psychological profile that deserves multiple viewings.