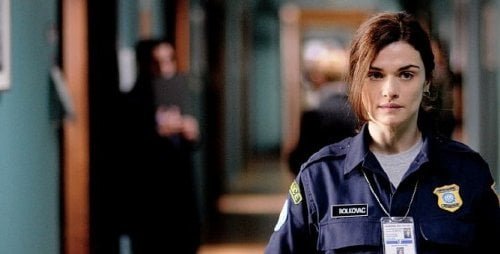 Kathy Bolkovac (Rachel Weisz) is a dedicated police officer in a small city in Nebraska. She is hoping to get into the state police but her application is rejected. Twice divorced and refused custody of her children, she decides to go for a high-paying private security job as a hired peacekeeper in Bosnia. The job, though, reveals more than she expects when Kathy uncovers corruption at the highest levels of her command in “The Whistleblower.”

Divorced Nebraska cop Kathryn Bolkovac (Rachel Weisz) is disappointed when her transfer request is denied. She's trying to get closer to her daughter who she lost in a custody battle, so when her superior suggests she take a six month job with a contractor as a U.N. International Police Force monitor in Bosnia, she goes for the $100K paycheck and a chance to help a devastated country get back on its feet. She's shocked at the derision shown by local cops for her first case, domestic violence against a Muslim woman (Roxana Guttman) getting out of the hospital for the eighth time, but it is the tip of the iceberg of corruption and degradation and trafficking of women she discovers within as "The Whistleblower." Cowriter (with Eilis Kirwan)/director Larysa Kondracki makes her feature film debut with startling 'inspired by true events' subject matter, an Oscar winning actress and a rather shopworn template. There is also the rather anti-climatic ending, which finds Bolkovac speaking to the British press, but with no serious repercussions for the perpetrators of crimes that include torture and murder. Still Kondracki's film is often gut-wrenching and should throw a bigger spotlight on this shameful episode. Weisz is in full on warrior crusader mode and her outrage and frustration with the inhumanity of the system is palpable. The film begins with a Ukrainian girl, Raya (Roxana Condurache), caught between the modern freedoms offered by her friend Irka (Rayisa Kondracki) and the watchfulness of her mother Halyna (Jeanette Hain, "The Reader"). She will become the face of the victims. Then, after establishing Kathryn in the U.S., she quickly moves to Bosnia and makes a name for herself when she mentors the one sympathetic local cop, Viko (Alexandru Potocean, "4 Months, 3 Weeks and 2 Days," "The Way Back"), on how to win a court case for that battered woman. The unprecedented victory brings her to the attention of Madeleine Rees (Vanessa Redgrave), head of the U.N. Human Rights Commission, who wishes to promote her to head up gender affairs. Meanwhile, her coworkers, led by Fred Murray (David Hewlett, "Splice"), make it chillingly clear they don't take her or her concerns seriously. When she's arrives at a nighttime raid at the Florida Bar, she's stymied by one of those apathetic local cops, who gives her a story about the young girls being paraded out being taken to a women's shelter. Kathryn enters the bar and, after seeing photographs of women there being treated like sexual slaves pinned on the wall, finds a back room that tells a horror story - chains, handcuffs, manacles, used condoms, passports. Her continued probing reveals that Murray was the officer on duty during the raid and that the girls taken away never made it to the shelter, an overcrowded barn run by one lone woman (Coca Bloos) with no resources. Kathryn realizes Murray is involved and the more she looks the higher up the trail leads. Kondracki has a fine ally in star Weisz, who won her Oscar for a similar role in the better "The Constant Gardener." She's also gathered a fine cast from the U.S., Britain and Europe with newcomer Condurache strong as the symbolic face of many. There have been many recent films of late about sex trafficking, from the pulpy "Taken" to the underwhelming "Trade," even a subplot in the "Dragon Tattoo" series, but none have hammered home the horror like Kondracki - one scene of retributional torture is so intense it's almost unwatchable, even though the director only suggests what is happening. But the Canadian filmmaker also falls back on tropes of the genre - the seeming good guy revealed to be anything but, slo-mo shots of the protagonist walking away from/through conspirators to emphasize her alienation, the source who suffers for the protagonist's righteous fight for justice and, last but not least, the fakeout where we doubt the intent of a known ally. Still, Kondracki conjures a chill for the audience when Bolkovac's frozen out of her own unit and lays a solid foundation for the stone wall which faces her heroine, including the ineffectual repatriation program (run by a shockingly aged Monica Bellucci, "The Matrix Revolutions") mired in bureaucracy and the secrecy that even Rees must operate under. The familial ties to the crime traced back through Raya add another layer to the tragedy. The strong supporting cast includes David Strathairn as the Internal Affairs agent Rees partners Kathryn with, the great Danish actor Nikolaj Lie Kaas ("Open Hearts," "Brothers") as a love interest (in his first English language role?) and British actors Benedict Cumberbatch ("Creation," "Four Lions"), Luke Treadaway ("Brothers of the Head," "Clash of the Titans") and Liam Cunningham ("The Guard") as cogs in the corrupt machine. "The Whistleblower" won't be remembered as one of the best in its genre, but it is supported by an intelligently chosen cast and it hits hard at its subject.

In past films about Bosnia and its ongoing violence – like “No Man’s Land” and “The Hunting Party” – the focus has been on the Bosnians and the corruption that permeates that country’s social and political life. “The Whistleblower” takes on a different level of involvement in the corruption in that country, one that involves high-ranking members of the private security company, Democra, responsible for protecting the civilian population, except for the girls they help traffic. As Kathy gets acclimated to her new life in what is essentially still a combat zone – you can hear the explosions of mines nearby at any time – she is called in to investigate a young girl, brutally beaten. The girl, Raya (Roxana Condurache), and her friend Irka (Rayisa Kondracki), were abducted by a Ukrainian slavery ring where the teenagers, and many more like them, are rented out to men who want to party, not a good thing for these girls. When Kathy hears their story, she discovers that the “clients” are members of the Democra security detail and are a part of the slavery scheme. With the corruption at such high levels, Kathy is forced to risk her own life in the name of justice for the enslaved teens. Rachel Weisz is one of those actresses who can transcend gender and play a role that is usually reserved for a male actor – Angelina Jolie is another thus able – and make it her own. Weisz gives Kathy depth of character as she takes a one-woman stand to save the lives of the youngsters whose chance of survival is virtually. This is not an Oscar performance, though it is solid thesping by an actress who, I think, is under appreciated. Kathy evokes both sympathy and empathy from this viewer. The story brings in some top notch acting talent with Vanessa Redgrave as Madeline Rees, Kathy’s boss who heads the UN Human Rights Commission and backs her quest for justice, appointing Kathy to the Gender Office. Monica Bellucci, looking haggard, is Laura Leviani, the Bosnian-stationed boss of the Global Displacement Agency and David Strathairn, as Peter Ward, is a Magoffin whose loyalties are questionable (or are they?). The rest of the cast help fill out the backdrop of the story. First time director Larysa Kondracki, with co-writer Eilis Kirwan, gives us a taut, well-paced inspired-by-a-true-story story (as opposed to a “based upon a true story” story – there is a difference). Kondracki, benefiting from her talented veteran cast, makes an assured debut feature film.