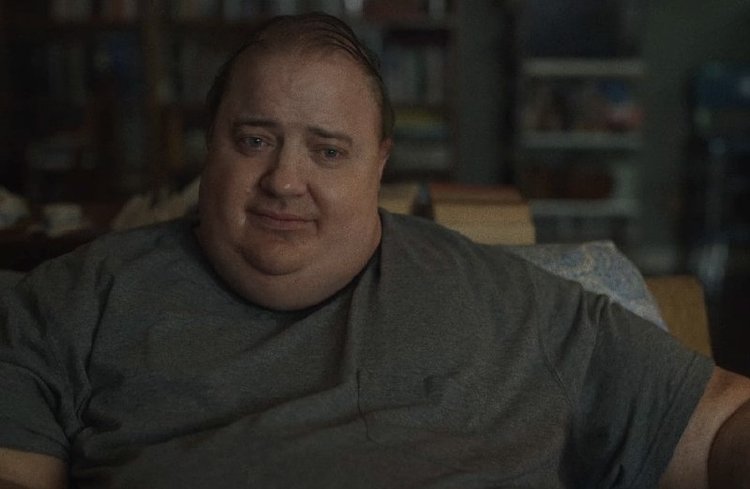 Filmmaker Darren Aronofsky ("Mother!") has long held a fascination with addictive or unhealthily obsessed characters, but while his latest also fits that mold, it is the first that isn’t accompanied by dazzling visuals and features a problematic screenplay by Samuel D. Hunter adapting his own work from the stage.  There has been a groundswell of affection for Brendan Fraser as he makes a comeback of sorts and the actor expresses an immense humanity and capacity for love that gradually blinds us to the physical extremes of his outward appearance, but it also must be said that optimism and self-destruction make for strange bedfellows.  The best performance in the film actually comes from Samantha Morton, who in one scene burns the house down expressing every emotional stage of a marriage and its broken aftermath.

Samuel D. Hunter, whose stage play mined his own experiences with religion, sexuality and obesity, adapts for the screen for the first time and his work, with its heavy-handed central metaphor is a weak link here, its stage acts masquerading as weekday character introductions, its stagecraft all too evident despite cinematographer Matthew Libatique and production designer Mark Friedberg and Robert Pyzocha's efforts to keep the small apartment setting visually engaging.  To continue with his Moby Dick analogy, we can see the rigging of his writing.

Charlie is a gay man who left his wife Mary (Morton) and young daughter Ellie (Sadie Sink) eight years earlier because he fell in love with Alan, an older student in one of his evening writing classes.  But his lover was troubled for reasons Hunter connects to two supporting characters here and Alan’s subsequent suicide has made Charlie, who was large to begin with, determined to eat himself to death.  (The film has been charged with exploitation because of this, but that isn’t the film’s problem - it casts an empathetic eye on the issue.)  In what his friend and unpaid caretaker Liz (Hong Chau, “The Menu”) tells him is sure to be his last week after a blood pressure reading of 238/134, Charlie makes it his mission to reconnect with the daughter his ex-wife has kept away from him.

So after Monday’s introduction to Thomas and Liz, who is exceedingly hostile towards the young missionary, we witness Charlie make a phone call, shower and shave, the latter tasks herculean given the man’s vast size (Adrien Morot  designed the thoroughly convincing 100-pound suit and prosthetic makeup).  The sixteen year-old who arrives at his door is so hostile to her estranged father, her first words are ‘So, does this mean I’m going to be fat?’  While it is conceivable that Ellie would bear a grudge against her dad, the character is so over the top her own mother describes her as ‘evil,’ telling Charlie later she was afraid the girl would hurt him.  Hunter’s attempt to prove Charlie’s belief in her is founded via the result of Ellie’s equally abusive treatment of the returning Thomas also fails to hold water.

Thankfully, Hunter’s created a more honest dynamic between Charlie and Liz, whose odd habit of literally feeding his addiction is given ironic counterpart when we learn of the commonality between them.  There is betrayal here, too, a welcome flaw in Charlie’s character.  The only bit of opening up Hunter has added to his play is in the character of Dan (Sathya Sridharan), the Gambino’s pizza delivery guy whose curiosity about the customer he never sees causes him to linger, his astonished expression upon seeing the man emerge for his food causing Charlie to binge eat in a scene Fraser accomplishes with fearless self-loathing.

The film’s production design is appropriately depressing, Charlie’s apartment on the upper deck of one of those housing units that look like a motel, its interior shrouded in gloom and encased in books.  Rob Simonsen’s (“The Way Back”) score features ominous chords which gradually build into orchestral melody.

“The Whale” is a muddle of Moby Dick and mixed religious signals which works sporadically.  Fraser is good here, but Morton steals the movie.

Director Darren Aronofsky and scripter Samuel D. Hunter, adapting his own play, create, with a bravura performance by Brendan Frasier – ensconced in latex and makeup to make him the 600-lb character, Charlie – a solid character study of loss, grief and resignation.

Charlie has had a turbulent life with a failed marriage and estranged daughter, Ellie (Sadie Sink), because of his love for Alan. His soul mate, deeply religious, took his own life when told that he is damned because of his gay lifestyle. His death devastated Charlie who coped by binge eating, bringing him to life-threatening proportions of size.

Charlie’s health care professional, Liz (Hong Chau), constantly scolds him for his deadly excess but there is love in her scolds. It turns out that she is Alan’s sister and she cares deeply for her friend, much to her own anxiety for him and his fast diminishing state of health. It is a performance that mixes professional duty and personal love for her best friend and is notable.

Brendan Fraser fully embraces his role as a man who, in his grief, has given up on his life. Fraser makes you feel sadness and revulsion in pretty equal portions. But, the balance shifts more to sadness as we learn his reasons for his obesity. There is a moving arc of character that plays out to emotional ends, for the characters and the viewer