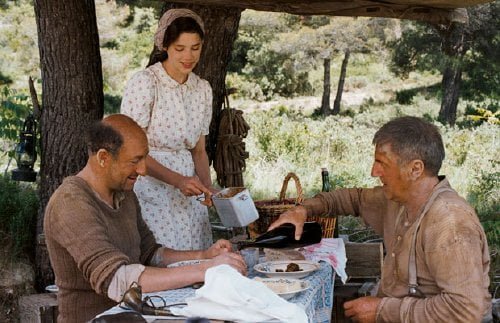 Before the start of WWI, laborer Pascal Amoretti (Daniel Auteuil, "The Closet," "Cache") was as happy as he could be living in Provence with his six daughters. His eldest, the Paris-educated Patricia (Astrid Bergès-Frisbey, "Pirates of the Caribbean: On Stranger Tides"), has caught the eye of Pascal's assistant, the sturdy, dependable Félipe (Kad Merad, "The Chorus," "Don't Worry, I'm Fine") and Pascal encourages the man, but she's also grabbed the attention of shopkeeper's son Jacques Mazel (Nicolas Duvauchelle, "Wild Grass," "Polisse"), a handsome young pilot who leaves to fight the war after he's seduced her. His parents are shocked when they are presented with "The Well Digger's Daughter."

French actor Daniel Auteuil has stayed in touch with the Pagnol family ever since Claude Berri's adaptations of "Jean de Florette" and "Manon of the Spring" brought him to international stardom, so, when a remake of Marcel Pagnol's own film of his novel was discussed, the actor decided to not only star, but take the plunge behind the camera. Everything went so well that he is now in pre-production with Pagnol's "Fanny" trilogy. Auteuil has a very classical touch behind the camera, nothing showy but beautifully pastoral as filmed by his "Le Bossu" cinematographer Jean-François Robin. His adaptation encompasses many things - a mother's reluctance to give up a son, history repeating itself within a family, the pull of sexual desire vs. safe respectability and the value of an education in breaking class divides. As an actor himself, Auteuil's made spot on casting decisions. If there are stumbles, it is perhaps the unexplained eloquence of the well digger himself and Alexandre Desplat's ("The Tree of Life") score which flirts with plagiarism (his first two lines, repeated throughout the film, are identical to "Rosemary's Baby's" until the last note). As Pascal, Auteuil himself has a wonderfully resigned sense of humor about living in a house of women. He's pleased that Patricia has returned to help (she had been given up to a rich Parisian woman for her own benefit) and invites the kind but older Félipe to her 18th birthday dinner where she will be presented with a chic hat picked out by the next eldest, Amanda (Emilie Cazenave), who wouldn't at all mind Félipe's attentions herself. Patricia resists his invitation to an air show until she hears that Jacques will be one of the participants. She's met Jacques by a stream while bringing her father his lunch and the young man gallantly carried her across. At the air show, as pre-planned, Patricia makes up a story about meeting an aunt whom her father doesn't get along with. She ends up in a room with Jacques while Félipe drinks the afternoon away waiting for her return. Jacques is then called to the front with little warning and entrusts his mother (Sabine Azéma, "Wild Grass") with a letter to give to Patricia at their planned meeting that he cannot make, but when Mme Mazel sees the beautiful young girl, she hides and burns his letter. Later, when dad learns of her predicament he marches his entire family to the home of M. Mazel (Jean-Pierre Darroussin, "Red Lights," "Le Havre") and his wife but, without knowledge of the letter, there is no proof of a connection between the laborer's daughter and the sought after son. Pascal is stern but supportive and takes Patricia to the home of his sister Nathalie (Marie-Anne Chazel) who, it is implied, once faced similar circumstances herself. Auteuil has two central speeches, so beautifully delivered we wonder where the man learned to think and express himself so well, but that's a minor quibble as Pascal has been established as an open hearted, generous man. As his friend and employee Kad Merad and Auteuil conjure a shared history that's relaxed yet strong, the younger man clearly just about part of Pascal's family. The terrific Darroussin paints a fair man, open-minded yet skeptical and the contrast with Sabine Azéma's fluttery performance is gently amusing. The young lovers are pretty, Bergès-Frisbey earnest, Duvauchelle leaving enough ambiguity to allow his character to solidify at the climatic moment. "The Well Digger's Daughter" may not hold too many surprises, but it's a well made film about good people thrust into difficult circumstances compounded by small village perception.