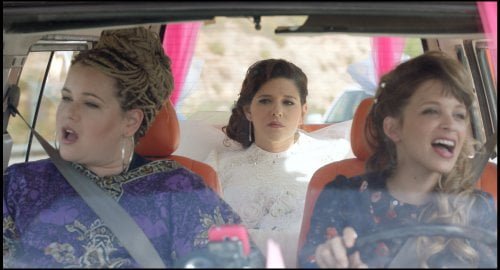 As she samples wedding fare with her Hasidic fiance Gidi (Erez Drigues), Michal (Noa Koler) is stunned when he tells her he does not love her. The thirty-two year-old Orthodox woman makes a leap of faith, booking Shimi's (Amos Tamam, "Lemon Tree") hall for the eighth day of Hanukkah, inviting 200 guests and buying a wedding gown. Michal believes she will find the love of her life within thirty days while her mother (Irit Sheleg) and sister (Dafi Alferon) fret over "The Wedding Plan."

Writer/director Rama Burshtein's first feature, "Fill the Void," was a quiet, elegant drama about an arranged marriage in Tel Aviv's Ultra Orthodox Hasidic community. For her second, she keeps a similar setting and subject, but this time the camera is hand-held rather than static, the colors livelier and the story more comedic. Noa Koler proves a tremendous find, an atypical beauty with a halo of tight curls and eyes of deep intelligence and sensitivity. Before Gidi walks off with his shock announcement, Michal had intuited something wrong, prodding him for explanations only to be rebutted with the criticism that she over analyzes things. Michal's quest may be based on blind belief but this is a woman constantly searching for and speaking the truth. This is evident as Michal meets one prospect after another, seemingly sabotaging her own mission. Ronen will not look at her, stating that this means the woman he does marry will be the most beautiful he's ever seen. Laughing, Michal says if he will gaze upon her face, she will commit. During her next arranged date, an interpreter speaks for a signing deaf man who asks why she is meeting with him now when she would not in the past. Her answer, 'despair,' shuts down his interest. Her 'crazy energy' intrigues a third, older man but he hesitates. With the clock ticking down, Michael visits the tomb of Rebbe Nachman of Breslov in Uman, Ukraine to pray for guidance. Sobbing and calling herself a liar, she is shocked to hear a male voice respond. Outside, he approaches her and she is dumbfounded to meet Israeli pop star Yos (Israeli pop star Oz Zehavi). Amused and admiring of her spirit, he asks for her address to 'check in on her.' Burshtein doesn't shirk with supporting female players as Michal's day approaches. Her friend Feigi (Ronny Merhavi) remains stalwart and her sister starts to come around. Michal's roommate Ziv (Karin Serrouya) faces retribution when she becomes engaged to Gidi. Her mom may be cringing in embarrassment, but even she gets caught up in the sisterhood. On the eighth day of Hanukkah, Michal still has no groom, then gets exciting, unexpected news. But there's a catch. Michal is unorthodox in her dress, which trends towards colorful frump, and occupation, her mobile petting zoo's snake bringing controversy at a little girl's birthday party. Koler's spirited performance is a thing of beauty, the actress fascinating to watch as we root for her character's faith to be rewarded. "The Wedding Plan" may look like just another wedding romcom, the trailer playing up its comedic aspects, but Burshtein and her star reach for something deeper. Investing in this film reaps richer rewards than any of Hollywood's recent wedding-themed comedies. Grade:

Michal (Noa Koler) is getting married. That is, until her arranged-marriage groom decides he does not love her and backs out. That does not deter the 32-year old who decides to go through with the wedding, trusting in God that He will bring her the man of her dreams in “The Wedding Plan.” As I was watching this thoughtful and intelligent second film by Rama Burshtein, I kept thinking what Hollywood would do with the story. Where Burshtein’s tale is funny, sad and a solid character study by Noa Koler as Michal, the Hollywood version would more likely be a light romantic comedy with Michal moving from one absurdist encounter after another until the requisite happy, sappy ending. “The Wedding Plan” is not that story. Michal’s plight to find a husband and secure her dreamed-for happy marriage is one of angst and insecurity – and confidence that her Orthodox Jewish belief in God will make things right. She is a headstrong woman who, when dumped by her fiancé, draws a line in the sand and declares she will marry in 30 days, the eighth night of Hanukkah. We follow Michal as she frantically struggles to find a new suitor, with the help of matchmaker Mrs. Klopholtz. She goes through the required dates to find a suitable candidate, but Michal and her insecurities and almost belligerent attitude are her own worst enemy. Everyone else’s worlds seem to be in order and she thinks she deserves that, at least. “The Wedding Plan” is a story about faith, determination and will. You want Michal to be happy but you want to shake her as she causes most of her own problems. Noa Koler gives Michal full depth of character and you root for her, despite herself.