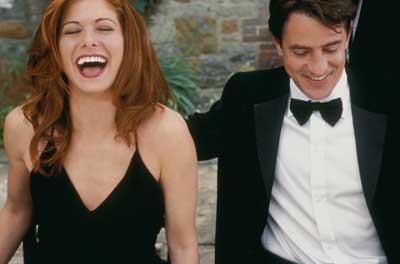 Kat Ellis (Debra Messing, TV's "Will and Grace") has a nasty problem - her younger sister is getting married in London, her ex-fiance is the best man and she has no current beau to shield herself with. A New York magazine editor friend helps Kat out by outing the subject of a recent article on the city's most discreet male escort and a desperate Kat hires "The Wedding Date."

Debra Messing shows comic flair and middle age has transformed Dermot Mulroney ("Lovely & Amazing") into quite the object of desire, but although these two have a nice, understated chemistry together, "The Wedding Date" is just another generic entry on the winter romantic comedy slate. Compared to last year's awkward and forced "Along Came Polly" and "Laws of Attraction," though, this little film is pleasant enough to offer some mild entertainment. Nick Mercer is a suave looker who knows how to make his clients look good, both for themselves and those they're trying to impress. Kat has all the women, particularly her humorously bold cousin TJ (Sarah Parish), lusting after her new man even though mom (Taylor Holland, TV's "Two and a Half Men") takes every opportunity to note Kat's aborted wedding to Jeffrey (Jeremy Sheffield). Nick quickly sizes up the family dynamics, particularly bride-to-be Amy's childlike tendency to demand her half-sister's 'toys' and former fiance Jeffrey's distress at losing the woman he loved, and begins to buff Kat's self confidence. One drunken bachelorette party later and Kat's bedding Nick, but in true romantic comedy fashion, obstacles for the obviously attracted couple begin to appear the very next morning. Screenwriter Dana Fox takes a page from "Pretty Woman," but in sexist fashion tips the scales of power to favor the male prostitute. At least this is no Cinderella tale for hookers and the dysfunctional family makeup is fresh enough not to seem like cliche. Mom Bunny's alcohol-fueled bluntness is softened with good intentions and British Stepfather Victor (Peter Egan) is a beacon of gentle caring amidst the various stressful wedding gatherings. Dialogue is natural, no mean feat when dealing with a hired escort dispensing advice to a cuckolded bridegroom that will save the day. Director Clare Kilner enables Messing's talent for physical comedy without resorting to pratfalls, like the subtle toss away of Kat's inebriated attempt to get out of a limo without removing her seat belt. Messing gives an altogether appealing performance as a woman who has had her self confidence given a good swift kick without slipping into neediness. Mulroney oozes charm and sex appeal, but the film's major weakness is that he never lets us experience his character falling in love - Nick stays the same, but some switch has been thrown. Amy Adams ("Catch Me If You Can") believably conveys a young woman who experiences extreme regret at having gotten her way once too often at the expense of others and Jack Davenport projects the simple good-naturedness of her trusting fiance Ed. Parish, in the stock 'crazy sidekick' role, is great fun as the lusty TJ, but Sheffield gives nothing to Jeffrey that would make him seem desirable. "The Wedding Date" has a few good laughs and appealing leads, but it never achieves the lift off of a real sparkling romantic comedy. Kilner's let the champagne go flat.

Kat (Debra Messing) is single and particularly unhappy that she must attend her half sister's wedding in London. Not willing to be the subject of scorn or pity when she arrives, alone, she raids her 401K and hires an escort (Dermot Mulroney) to come with her as "The Wedding Date." It's that time of year when the studios start pushing out their stock of movies that are not part of the whole "For Your Consideration" stable of films that dominate the previous year's end. Usually, the entries early in the year represent the dregs that the studios dump on an unsuspecting public that is starved for new movie fodder. While "The Wedding Date" is not a great film by any stretch of the imagination, it is a sometimes likable flick that is a little step above the usual dreck that comes out just about now at your local multiplex. Kat - Messing made up to resemble Jennifer Anniston so pointedly that I can only think that "The Wedding Date" was a vehicle specifically designed for the former "Friends" star - is a capable career woman who, because of her bad luck with men, has some serious esteem problem. She is so insecure and afraid of what others think that she, out of desperation, scours the personal ads to find a suitable escort to hire. She makes arrangements, sight unseen, with Nick (Mulroney), couriers a first-class, round trip ticket to him and nervously waits to meet him on the plane. Her concerns and tensions prove unfounded as the suave escort works to make things right for Kat. "The Wedding Date" takes predictable turns along the way to its inevitable happily-ever-after ending but these turns are occasionally amusing. There is much by way of formula here, though, with such films as "Four Weddings and a Funeral" showing their influence in this by-the-numbers romantic comedy. Messing, known for her starring turn on TV's "Will& Grace," has not been given a lead in a film up to now, with only supporting characters under her belt. Her performance in "The Wedding Date" is tentative, at best, as she is overshadowed at times by the supporting cast - particularly Holland Taylor as her outspoken, domineering mother, Bunny. Mulroney does a OK job as the suave escort, Nick, but never really gets above the two-dimensions of his character. Support fares better with Taylor, as Kat's mom, Peter Egan, as her kindly step dad and Sarah Parish as Kat's sassy cousin TJ overshadowing the leads. "The Wedding Date" might make a decent date movie for less discerning 20-something auds but should really be relegated to video where you won't have to shell out $20+ to see it at a theater.