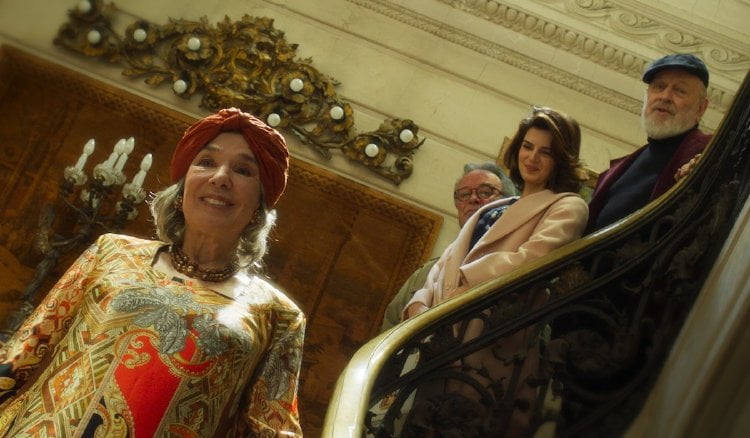 The only other actress besides Sophia Loren to have won the Best Actress Oscar for a foreign film, Mara Ordaz (Graciela Borges, "La Ciénaga") lives with her prized statuette in a grand crumbling mansion with her wheelchair bound husband Pedro (Luis Brandoni) and memories of her glory days, projecting her old films like Norma Desmond in “Sunset Boulevard.”  Oddly, her old screenwriter Martín Saravia (the late Marcos Mundstock) and director Norberto Imbert (Oscar Martínez), also live there, having been wed to Mara’s long missing sister and friend.  She’s dying to get rid of them and when a couple of real estate developers scam their way into her home, she’s ripe for exploitation in “The Weasel’s Tale.”

Cowriter (with Darren Kloomok)/director Juan José Campanella ("The Secret in Their Eyes") has fashioned a throwback black comedy of con in which the targeted victims turn the tables on the scam artists.  This is a fun romp buoyed by an exceptional cast, Cecilia Monti's costume design and Nelson Noel Luty's art direction.

There is trouble afoot even before Francisco Gourmand (Nicolás Francella) and Bárbara Otamendi (Clara Lago) arrive at the remote old home claiming a need to use the phone.  Martin spends his time shooting varmints in the hen house (the weasels of the title are actually opossums) and trapping rats in the kitchen to relieve his boredom.  Both he and Norberto despise Mara, who reciprocates, wishing to spend her remaining days alone with the husband whose career never attained the heights of hers.

She is swept off her feet by the flirtatious Francisco while Bárbara manipulates the men over a game of pool, but the senior citizen brigade is as on to them as we are from the outset.    The fun is to be had among the older players, who have unseen cards up their sleeves and a deep, dark history – professional career evaluations are biting.  Campanella has some tongue-in-check meta fun with his fictional filmmakers – as one says during the climax ‘Ah look – thunder at just the right moment!  Put that in your film and no one will believe it.’

Four old filmmaking colleagues, long retired, have shared their country home for 50 years. One day, a young couple, Barbara (Clara Lago) and Francisco (Nicolas Francella), drives up, claiming they are lost. At once, the young man recognizes Mara Ordaz (Graciela Borges), the once-great actress, and fawns over her. Next thing you know, Mara is planning on selling the house and move to Buenos Aires and a new life in “The Weasel’s Tale.”

Probably within seconds of when the conniving couple arrives on the doorstep claiming to be lost, I knew exactly what was going to happen. (Well, the portentous music played on their arrival kind of gives it away.) With that knowledge and an immediate appreciation for aged quartet of thespians, I settled in to see where director and co-scribe Juan Jose Campanella was taking his yarn of friendship, vanity and deceit. The result left a smile on my face.

The cat and mouse story seems to hold the advantage for the young, smart couple who set out to con the old folks - Mara, Norbert (Oscar Martinez), Pedro (Louis Brandoni) and Martin (Marcos Mundstock). But, as the story unfolds and you get to know the characters (especially the oldsters) you begin to wonder who is conning whom and that is the pleasure “The Wesel’s Tale.”