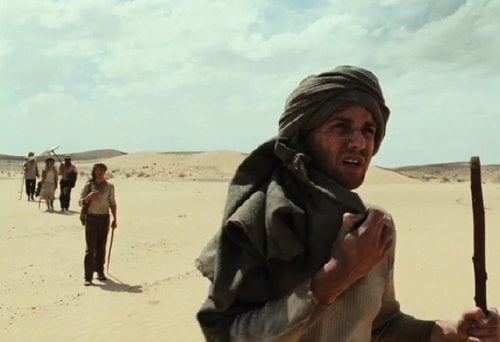 During World War II the Soviet government, under the iron fist of Stalin’s rule, arrested and deported any enemy of the state – real or imagined – to the frigid, deadly Siberian gulags. In one isolated prison a small group of brave men make the decision to escape across the thousands of miles of rugged, forbidding terrain to find “The Way Back.”

During WWII, Janusz (Jim Sturgess, "Across the Universe," "21") is sent to a Siberian Gulag after his wife was forced to give evidence against him. With little but the elements to imprison him, Janusz makes plans with terse American Mr. Smith (Ed Harris, "Gone Baby Gone," "Appaloosa"), Russian street thug Valka (Colin Farrell, "In Bruges," "Crazy Heart") and a diverse handful of others to make a break to find "The Way Back." There's been a small surge of filmmakers returning after a long hiatus of late and Australian director Peter Weir ("Witness," "The Truman Show"), whose last film was 2003's "Master and Commander: The Far Side of the World," is the latest. "The Way Back," which was screened for 2010 Oscar qualification, is a WWII true story underdog, like 2009's "Defiance" which also starred Harris, but a whole lot better. This is the type of war torn survival film that doesn't sound like it has anything new to offer, but Weir gives the film a gradual emotional build amidst radically changing landscapes. Sturgess is compiling quite an eclectic filmography and young Saorise Ronan gives an effecting performance as a surrogate daughter to the initially unyielding Harris. The Gulag is what one would expect - a harsh, cold environment with little food and its own social system. Janusz distinguishes himself with Smith by giving an old man his soup, a kindness Smith says can kill him. A group forms including Voss (Gustaf Skarsgård, "Evil," "Patrik Age 1.5"), a Latvian priest, Tomasz (Alexandru Potocean, "4 Months, 3 Weeks and 2 Days")a pastry chef surviving with his talent for erotic drawing, Zoran (Dragos Bucur, "Police, Adjective"), a cynical accountant and a teenaged Pole, Kazik (Sebastian Urzendowsky, "The Counterfeiters"), who begs Janusz not to tell the others of his snowblindness. And it is the cover of snow that allows the seven to make their way into the woods, where they quickly realize how difficult their journey will be. Janusz has an idea, though, and makes face masks from birch bark, turning the travelers into an eerie sight. It will be no surprise who succumbs first, although his death is laden with irony and invested with a strange beauty. They will face wolves, who inadvertently split a debate on cannibalism in a brutally animalistic scene, and a young girl, Irena (Saorise Ronan, "The Lovely Bones"), a mystery viewed with suspicion and as potential baggage who is saved by the kindly Zoran when they are gifted with bounty in the form of a baby moose stuck in some mud. And yet, it is the resourceful and wily Irena who begins to give the group cohesion as she elicits everyone's personal history one by one. The high level plan was to reach Mongolia, but after trekking through snowy forests, mountains, clouds of mosquitos and the turnoff where Valka heads for home, their joy at spying Ulaanbaatar is shattered when they find its Buddhist monastery destroyed and learn the country has fallen to Communism. Battered, the group nonetheless braves the Gobi desert in an attempt to reach India. This is an amazing story, a 4,000 mile trek taken under extreme conditions, shaped by political forces and driven, in the case of Janusz and Smith, by a need for forgiveness. As adapted by Keith R. Clarke from Slavomir Rawicz's acclaimed book, "The Long Walk: The True Story of a Trek to Freedom," it is a story which manages to be both epic and intimate, a character driven piece against with the scope of the world's largest continent. Weir, who shot in Australia, Morocco and Bulgaria, achieves an unfussy grandeur with this awe-inspiring tale (photographed by "Master's" Russell Boyd). It's a two-tiered ensemble acting piece with strong, simple themes painted as a continually changing mural.

Adapted from the memoirs of author Slavomir Rawicz, writer-director Peter Weir (with co-scribe Keith R. Clarke) brings this harrowing tale of suffering and survival to the screen with an ensemble cast led by Jim Sturgis, Ed Harris and Colin Firth. Each is a victim of Soviet oppression and is gathered, along with thousands of others, in a bleak, perpetually cold gulag. Conditions are horrendous and the newly dead are dragged out every morning, making mortality a daily battle for the living. The desperate conditions in the camp force a small group of inmates to make the decision – escape and maybe die or stay and make it a sure thing. Janusz (Jim Sturgess) is an imprisoned engineer whose wife (Sally Edwards) was forced to give him up to the NKVD (later called the KGB) and was sent to the gulag. He is smart, with great survival instincts, and attracts the attention of Mr. Smith (Ed Harris), an American who was arrested when he came to Russia to find his missing son. Instead, he too ends up at the gulag and joins Janusz in his escape plans. Another inmate, Valka (Colin Farrell), a street-wise gangster, offers his strong arm tactics as Janusz’s bodyguard. Soon, four more prisoners sign up for the escape and the plans are put in motion. This begins an amazing trek across four countries that cover nearly 4000 miles. Early on in their journey, one of the group’s numbers suffers from snow-blindness and he wanders away from the camp. It is too dangerous for the others to search for him in the dark and his body is found, frozen, the next morning only yards away from their camp. The six continue on their journey, avoiding contact with anyone, lest they be caught. They come across a 16-year old girl, Irena (Saoires Ronan), traveling alone and she joins the tiny band of escapees. Seven once again, they resume their march to freedom. Director Peter Weir and his cast and crew journeyed to such locations as Bulgaria, Morocco and India to give the film a realism that borders on documentary. The characters, once established, are given little development, making the journey itself a character in the film. Actually, the trials and tribulations of the dangerous passage over the relentlessly rugged and forbidding terrain is the focus of the film, with the characters supporting the landscape. Photography, by Russell Boyd, is down and dirty with the landscape colors muted and cold, befitting the conditions the band is forced to live under. Techs are straightforward and give the film its sense of realism.