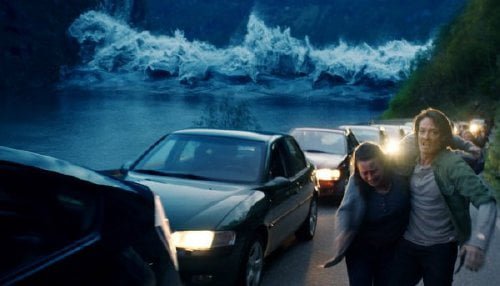 Forty years prior, the Åkerneset mountain in Norway's fiords issued a landslide of rock that created a towering wave that destroyed the town of Geiranger. Today there is a dedicated group monitoring seismic activity to alert the townspeople should they need to move to higher ground. On the very day geologist Kristian (Kristoffer Joner) is moving his family to the city to take a new job with an oil company, he notes some alarming signs, but his boss Arvid (Fridtjov Såheim) takes a wait and see approach to "The Wave."

Norway's submission for the Foreign Language Oscar had the promise of a new take on the disaster movie, but writers Harald Rosenløw-Eeg and John Kåre Raake and director Roar Uthaug strictly adhere to Hollywood formula. From the "Jaws" like setup where one man's warnings are drowned out by tourism concerns to the dad of "San Andreas" trying to save his scattered family, "The Wave" is utterly predictable, elevated only by its stunning scenery. Kristian's wife Idun (Ane Dahl Torp), teenage son Sondre (Jonas Hoff Oftebro) and young daughter Julia (Edith Haagenrud-Sande) are trying to keep a positive outlook about leaving their charming seaside home. At work, his colleagues celebrate his new job. When ground water levels drop 4-5 feet in two spots, they're happy to blame the mysterious readings on equipment, ever so slightly resentful their departing coworker won't appear to let go. The family plan is for Kristian to take the kids on the ferry, Idun, who is working her last shift at Gerainger's hotel, to follow the next day. But Kristian's instincts are so strong, he turns around and heads back to work. Sondre will stay in a hotel room while Julia begs dad to spend one more night at the house. That night Kristian comes up with an explanation for the equipment failure, hypothesizing that tectonic shifts have cut the wires to their sensors. Arvid and Jacob (Arthur Berning) rappel down a crack in the mountain to check, horrified to learn that Kristian was right just as things start to really go south. As Gerainger's alarm blares, Kristian tries to get Julia to higher ground on the traffic jammed road out of town as Idun evacuates hotel guests and finds Sondre is not in his room. Special effects are no match for natural Norwegian splendor as a merely serviceable CGI wave races towards the town. Uthaug concentrates more on the individual struggles of Kristian taking refuge with a friend's wife in a car or the plight of Idun, who with the help of a tourist couple finds Sondre just in time to lock themselves into a basement utility room. Magnus Beite's score is generic Hollywood orchestral. Grade:

In 1905, part of the craggy, mountainous fjord near the scenic Norwegian coastal town of Geiranger broke off and fell into the sea, creating a 300 foot wave that destroyed everything in its path. Over a century later, the town is once again prospering and the mountain is being closely watched. Not closely enough, though, when a new disaster looms to strike with “The Wave.” For the better part of “The Wave,” we had a interesting, well-done disaster flick that seemed different than the usual Hollywood fare. It seemed to have found its own level until the filmmakers turned to “The Poseidon Adventure” of angst and action as the waters rise and threaten the stars. Of course, unbelievably heroic acts of stamina and breath-holding ensue to the expected happy family ending. “The Wave” is an interesting look at how Norwegian filmmakers interpret the concept of disaster movies. They had me most of the way but dropped the ball opting for a conventional, done before finale.