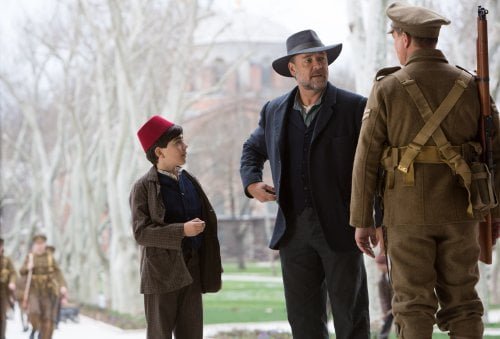 The Battle of Gallipoli, in 1915, ended in the slaughter of thousands of ANZAC soldiers with nothing gained. One Australian farmer, Connor (Russell Crowe), lost three sons in the conflict but has never had closure with the loss. Following his wife Eliza’s (Jacqueline McKenzie) death four years after the bloody battle, he makes the long journey to Istanbul to find his boys’ remains and bring them home in “The Water Diviner.”

Four years after his three sons never returned from the Battle of Gallipoli, Australian farmer Joshua Connor (Russell Crowe) returns home after a hard day digging a well. There waits his beloved wife Eliza (Jacqueline McKenzie, "Deep Blue Sea") who is driven so mad with grief she insists he reads a bedtime story to their boys. After finding her drowned in her nightclothes the next morning, he makes a graveside promise he will find their sons and travels to Turkey, ignoring ANZAC restrictions to the battlefield in "The Water Diviner." Russell Crowe moves behind the camera for the first time for this heartfelt, if inconsistently directed, story based by writers Andrew Knight ("The Efficiency Expert") and Andrew Anastasios on a line found in a letter from Gallipoli's Graves Registration Unit Lt-Col Cyril Hughes (Jai Courtney, "Insurgent") to an Australian historian in which he mentions an Australian father arriving to find his son's grave. The Battle of Gallipoli, regarded by Aussies and Kiwis as their Vietnam, resulted in devastating losses on both sides (over 100,000 troops killed), but Crowe throws its history, along with the resulting Turkish Civil War, at the screen with little regard for the uninitiated. Although Anzac Day is noted yearly in Australia, Crowe goes with a few awkwardly inserted title cards here, some grainy flashbacks there and a cinematically unexplained third act Greek retaliation against the Turks to provide a backdrop for his story of post-war familial suffering and loss. Crowe begins in the outback, his grizzled farmer seen in the act of diving water with his dog. After clashing with the parish priest over his wife's burial, he sets sail, arriving in Istanbul to ask the way to Gallipoli. Instead his bag is snatched by Orhan (Dylan Georgiades), a 10 year-old boy intent on recruiting business for his family's hotel. Connor gives in, especially after laying eyes on its proprietress, Orhan's mother Ayshe (Olga Kurylenko, "To the Wonder," "The November Man"), who, in turn, wants nothing to do with lodging an enemy, having lost her husband during the war yet refusing to accept his death. She's gradually won over by Connor's kindness towards her son who is clearly yearning for a father figure despite the presence of his uncle Omer (Steve Bastoni, "The Matrix Reloaded") whom Connor initially believes to be the boy's father and who wishes to 'honor' his brother's memory by making his widow his second wife. It is Ayshe who advises Connor on how to get to what the Turks call Çanakkale. His arrival on the boat of a local fisherman surprises Hughes, but the man's intent on safety measures amidst his overwhelming mission and orders Connor out. Connor makes camp on the beach and it is Turkish Major Hasan (Yilmaz Erdogan, "Once Upon a Time in Anatolia") who sympathizes, acknowledging him as the only father who's made the journey. Hasan and his dependent underling Sergeant Jemal (Cem Yilmaz) become Connor's unlikely allies (the Turks cooperated with their former enemies in identifying Gallipoli's dead). Screenwriter Anastasios, whose grandfather divined water, uses the skill to give Connor's character a general intuition, one which allows the man to feel the presence of his sons and imagine their actions. This device is used to flash back to Arthur (Ryan Corr, "Wolf Creek 2"), Edward and Henry's final hours on the field and allows Connor to pinpoint the exact point where his sons died. When one of their skulls is located, forensics are misinterpreted, but a third act adventure leads to the truth. Crowe is quite appealing here, quiet, humble and supportive, a man who's lost everything but his kindness and decency. The Ukrainian Kurylenko plays Ayshe as a woman in denial who married for love and is staring one of convenience and servitude in the face with anxious rebellion. Bastoni restrains the moustache twirling just enough, his righteousness a cover for his jealous and entitled lechery. But the film's standout is Erdogan who creates a complex character without succumbing to sainthood, ably supported by Yilmaz who adds comic color. The production makes fine use of Australian and Turkish locations, including Istanbul's Blue Mosque. Special effects include a terrifying sandstorm seen in a flashback where Joshua rescues his three young boys. The screenplay and direction incorporate themes, like Connor's reading of Arabian Nights, visions of whirling dervishes and watery passages, without hammering them over our heads, but subtlety and clarity are lacking elsewhere, such as a romantic dinner lit with a hundred candles and Hasan's connection to Connor's eldest. "The Water Diviner" is a bit bumpy in its pacing and communication of history and background. Crowe may not be a Redford or Beatty his first time in the helmer's chair, but proves a solid director of action and intimate emotional scenes. Grade:

“Inspired by true events” is always a red flag, prompting me to look into those true events. As is frequently the case, story authors Andrew Knight and Andrew Anastasios tell a tale of composites and historical research rather than the story of an actual person named Joshua Connor and his epic journey. As such, first time director and the film’s star, Russell Crowe, has a lot of latitude, not having to adhere to history and tells the story with all the bells and whistles – war, danger, intrigue, romance, friendship, coping with loss and more. “The Water Diviner” opens with Turkish troops preparing to attack the ANZAC trenches then shifts to the Australian outback. It is four years later and Joshua, holding his dowsing sticks, wanders his arid land searching for water. He finds the spot and begins the back breaking labor to dig a well until he taps into an underground stream. He then returns home to Eliza, who insists that he read their sons their favorite bedtime story, Arabian Nights. He does so and we see he is reading to three empty beds. From here the pieces begin to fall into order as we watch their sons – Arthur (Ryan Corr), Edward (James Fraser) and Henry (Ben O’Toole) – prepare to go to war. The tragedies in Joshua’s life, especially the unexpected death of Eliza, cause him to decide to make the months' long and not very hopeful trip half way around the world. In Istanbul, he meets a beautiful widow, Ayshe (Olga Kurylenko), who runs the hotel her young son, Orhan (Dylan Georgiades), conned the Australian into staying. (You can tell that romance will eventually enter the picture, but that is an aside that is intended to soften the film’s main story.) The real meat of “The Water Diviner” is when Joshua attempts to find his sons’ bodies. This is difficult as the battle zone is strictly off limits to civilians per the British government. The Imperial War Graves Unit, headed by Lt. Col. Cyril Hughes (Jai Courtney) and assisted by Turkish Army Major Hasan (Yilmaz Erdogan), is tasked with finding and identifying some 10000 war dead. When Joshua shows up, he is ordered to leave, but it will be two days before he can get transport. Major Hasan feels for the man and his mission and asks that they help Connor until he departs. Progressive flashbacks tell the sons’ story, depicting the barbaric horrors of the battle of Gallipoli that ended with over 120000 killed on both ANZAC and Turkish sides. The production and depiction of war is intense and believable and, indeed, horrific. Director Crowe does a serviceable job behind the camera and shows his star power in front. Olga Kurylenko is lovely as Ayshe and is the center of a nice, if unreal, romance across cultural boundaries. Yilmaz Erdogan is outstanding as the sympathetic former enemy and his performance resonates. “The Water Diviner” tells a moving tale of a man’s love for his sons and the lengths he is willing to go to return his boys home.