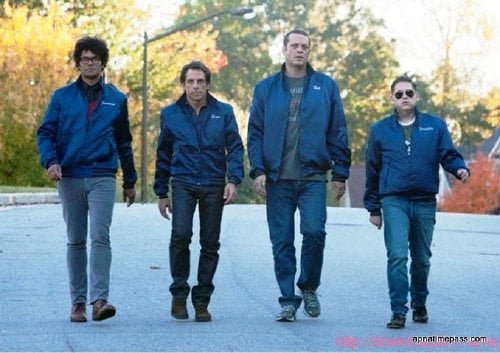 Evan (Ben Stiller) is the proud as punch senior manager of Glenview, Ohio's Costco and an involved citizen, having established a running club, a Spanish speaking club at a senior center and run for councilman. He believes in diversity, so is genuinely thrilled to hear his nighttime security guard, Antonio Guzman (Joe Nunez, "Superbad"), has received his U.S. citizenship. But the next morning he finds his beloved store roped off with crime tape, Antonio dead at the hands of a particularly savage killer. When the literally clueless Sgt. Bressman (SNL's Will Forte, "That's My Boy") suggest Glenview's police force is overwhelmed, Evan steps up and forms "The Watch."

Of course, that's a neighborhood watch, the title of the film having been changed in the wake of the Trayvon Martin case, but this comedy needed more than a name change. SNL's Akiva Schaffer may be too skit-bound to tackle a feature length comedy and while writers Seth Rogen & Evan Goldberg produced "The Pineapple Express," their last work was "The Green Hornet" (cowriter Jared Stern offered "Mr. Popper's Penguins"). There are glimmers of humor, like Evan's introductory prologue, the interplay between Vaughn and Hill and some "Hot Fuzz" style self-aware cliche goofing but everything just flatlines. Frankly, I was bored to tears. After papering Glenview with flyers, Evan anxiously awaits the crowd who will show up to talk about his neighborhood watch. First to show is Bob (Vince Vaughn), a naive family man looking for beer drinking buddies. Next is Franklin (Jonah Hill), a police academy reject with issues. Evan is overjoyed when he opens the door for the last responder, Jamarcus ("Submarine's" writer/director Richard Ayoade), a black man looking for hookups. Evan's itinerary gets jettisoned by Bob and his first stakeout ends up in humiliation at the hands of Bressman, but eventually the guys actually begin to find evidence - of aliens. One can see how some of the ideas may have seemed amusing on the page, but the screenwriting construct is awfully obvious. The film builds to conflict when the guys split over two parties. Evan and Jamarcus scope out Evan's creepily suggestive neighbor Paul's (an uncredited Billy Crudup) house, but Bob and Franklin leave to check on Bob's teenaged daughter Chelsea (Isla Fisher lookalike Erin Moriarty), whose boyfriend Jason (Nicholas Braun, "Red State," "Prom") buys extra large condoms at Costco in bulk. Evan is incensed, but the misdirection is painfully obvious, just like we know what's going on at Paul's will be payoff for Jamarcus's quest. An attempt to stir some "Invasion of the Body Snatchers" into the pot is half baked. A subplot about Evan's infertility and his inability to tell his wife Abby (Rosemarie DeWitt, "Your Sister's Sister") is supposed to show character development, but just feels tacked on. Product placement runs rampant. When the neighborhood watch gets their first call, it turns out to be a prank and they all end up with egg on their faces. Perhaps the filmmakers most inspired joke was an insider critique of their own movie.