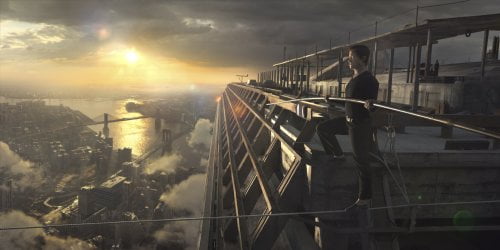 At the age of 8, Philippe Petit (Joseph Gordon-Levitt) was mesmerized by a wire walking act at a circus. Thrown out of his home by a father disappointed that his son had become a circus performer, Petit threw in with Papa Rudy (Ben Kingsley) to learn the intricacies of his trade while making his living on the streets. His first coup was his walk between the towers of the Notre Dame Cathedral, but when he saw an article on the World Trade Center being erected in New York City, it became his dream location for "The Walk."

For those who want to really know everything about the mad wire walker, James Marsh's 2008 documentary "Man on Wire" is unbeatable. For those who want to experience what it was actually like to engineer the feat and then walk in the clouds carrying a 55 lb. balancing beam, director Robert Zemeckis ("Who Framed Roger Rabbit," "Flight") has done it, digitally recreating the WTC (with production designer Naomi Shohan ("Winter's Tale") and "Flight's" visual effects supervisor Kevin Baillie) with the Petit-trained Gordon-Levitt walking, stunt double Jade Kindar-Martin performing the more intricate moves. Those afraid of heights will be seriously challenged by the reality of a superbly done 3D conversion, especially as seen on IMAX screens. There's only one problem - the hour and a half of movie one needs to watch to get to the spectacle. Zemeckis and cowriter Christopher Browne (adapting Petit's book 'To Reach the Clouds,' also the source of Marsh's doc) have crafted an odd film, one which features broadly drawn characters overacting in a fairy tale throwback reminiscent of "Around the World in 80 Days." The first thing we see is Joseph Gordon-Levitt's face filling the screen. Director of photography Dariusz Wolski ("The Martian") pulls back to reveal he's standing on Lady Liberty's torch, a French man on France's gift to America like Jack at the top of his beanstalk. It's a framing device Zemeckis returns to, a platform from which Petit relates his tale, and it appears the filmmakers are trying for a sense of childish wonder, instead achieving corny artificiality. There's a little bit of love story, as Philippe woos Annie Allix (Charlotte Le Bon, "The Hundred Foot Journey") with his patented persistence, then forms his support team of long time photographer friend Jean-Louis (Clément Sibony, "The Hundred-Foot Journey") and Jeff (César Domboy, "The Princess of Montpensier"), a school teacher afraid of heights. In New York, they meet the French speaking JP (James Badge Dale, TV's 'Rubicon,' "Flight") who rustles up a couple of stoners. On one of his many disguised infiltrations of the still under construction North Tower, Petit is recognized by 85th floor insurance man Barry Greenhouse (Steve Valentine, 2009's "A Christmas Carol"), who saw him at Notre Dame and agrees to become the team's inside man. With the exception of Domboy, who spends the evening of August 6, 1974, on the North Tower's roof with Petit (where he must sit on a beam over an elevator shaft to avoid detection by security guards for three hours), these people may as well be interchangeable. Not even Annie, Petit's lover, comes into any kind of focus. Everything rests on Gordon-Levitt, sporting distracting blue contacts, a bad wig and an outrageously over the top French accent. He plays Petit as a driven, egotistical pixie. "The Walk" is all about the effects, an IMAX sensation padded into a movie. In fairness, it is also a celebration of the World Trade Towers, buildings New Yorkers hated until Petit 'gave them soul. ' Yet even here Zemeckis makes odd choices, like giving us Petit's first view of them from the window of an airplane. Grade: