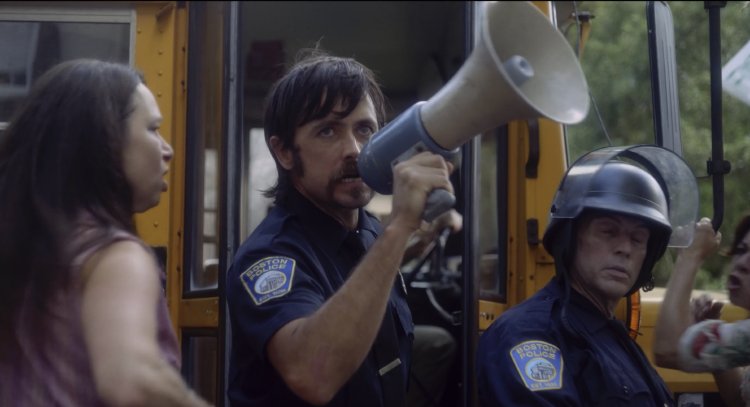 Just before his daughter Kate’s (Katie Douglas) senior year in a Southie high school, Boston Irish cop Bill Coughlin (Justin Chatwin, Showtime's 'Shameless') learns he’s being reassigned to protect Black students who will be bussed to her school per a 1954 Supreme Court ruling and 1972 NAACP lawsuit against the Boston School Committee, which had resisted desegregation.  But Coughlin will also have to deal with his daughter’s own racism, exacerbated by her budding relationship with the son of his old childhood friend turned thug ex-con Johnny Bunkley (Jeremy Piven) and on the first day of school in 1974, he’ll protect the same young girl she targeted in “The Walk.”

This well meaning but scattershot portrait of South Boston during the 1974 bussing crisis spends more time with its white savior Boston Irish cop Bill Coughlin’s (Justin Chatwin, Showtime's 'Shameless') relationship with childhood friend turned thug ex-con Johnny Bunkley (Jeremy Piven) than it does with actual school bussing.  The film does illustrate how rooted racism was in Southie and how terrifying the prospect of entering the area was for many Black students, but the film spends its entire running time leading up to that first day of school, instead focusing on Coughlin family dynamics and teenagers talking about a prom on the entirely wrong end of the school year.  Bostonians are unlikely to buy the film’s New Orleans locations as a substitute for its city streets.

Cowriter (with George Powell)/director Daniel Adams ("The Lightkeepers”) has covered the walls of the Coughlins’ home with JFK and Erin Go Bragh harp tapestries, but the first mystery is the foreign accent of Bill’s wife Pat (Russian actress Anastasiya Mitrunen).  She’s clearly not Irish, but her background is never identified, her foreign status explained by one sentence mid-film.  To further unnecessarily complicate things, Bunkley taunts Bill, who was the one who sent him to jail, with the information that he ‘had’ Pat before Bill did.  Pat will not tolerate racial slurs in her household (and we get at least four derogatory words for Black people, including the worst, not to mention one or two for Mexicans, words not heard in decades).   This means Katie, who unbeknownst to her parents has ditched good kid Marty (Jackson Baker) for bad boy John Bunkley Jr. (Matthew Blade), is often being sent to her room, one which she sneaks out of to throw rocks at a car, whose driver, Lamont Robinson (Terrence Howard), has dared to use Southie streets.  His daughter Wendy (Lovie Simone, "Selah & the Spades"), terrified in the car that night, decides to brave being bussed into Southie at the start of school.

There’s simply too much going on in “The Walk” which has little or nothing to do with what it claims to be primarily about.  There’s McLaughlin (Malcolm McDowell), some kind of local crime lord the Bunkleys are in with, who offers Katie’s best friend Cheryl (Jenny Griffin) an accounting job (Cheryl gets word she’s being bussed to Roxbury and then disappears from the film).  He’s apparently behind a deal with Southie cops to call in sick and keep their kids out of school and is ready to get violent with cops like Bill who refuse to toe the line, but plot developments like this trickle in while Bunkley’s given an entire scene to sexually threaten Pat.  When attention turns to the racism that is the film’s central theme, characters’ self reflection feels too modern.

There are some good performances here, mainly from Chatwin, Simone and Douglas, but “The Walk” is amateurish and unconvincing, a film rooted in a location it only realizes in second unit establishing shots far from the neighborhood it portrays and which feels like a mini-series hacked down to 105 minutes.

In 1965, the US Supreme Court declared that school segregation is against the law. In 1971, it was decided that busing would resolve the problem. In 1974, that law was put into effect in the Boston school system to great controversy and consternation. Two families, one black and the other white, will be severely impacted by the court decision in “The Walk.”

I was in my early 20s and lived in Medford (just outside of Boston) when US District Court judge W. Arthur Garrity ordered the segregated Boston school system to integrate. The solution was to take black kids from schools in, say, Roxbury and send them to South Boston and vice versa. Having lived in the racism-rich Boston-area all of my life, I thought, “Good luck with that.” If you know the area’s history, you also know it did not go well.

Director-writer Daniel Adams, with co-scribe George Powell, takes on the telling of those turbulent times. But, do not expect it to be about the busing crisis. Though it sort of deals with that, it is more about the dynamics of two of the families, one black and one white, living in a racially divided world.
Bill Coughlin (Justin Chatwin) is an Irish cop on the BPD who is assigned to escort black students into South Boston High when the court order begins. His daughter, Kate (Katie Douglas), to his and his wife, Pat’s (Anastasiya Mitrunen), delight, is not being bused. Still, their lives will be sorely changed by events that will play out.

Lamont Robbins (Terence Howard) is a black EMT and his daughter, Wendy (Lovie Simone), is notified that she will be sent to Southie High. It is not a stretch to figure out that these two families will cross paths in a dire way.

I am trying to figure out what is the actual point of “The Walk.” If it is to enlighten us on the very messy times, it misses its mark. Instead it shows the lines being drawn between races and the hate that existed and which, I am sorry to say, still does to this day.

The story, instead of being an indictment on our society then and now, takes the expected melodramatic path of good guys and bad guys without much nuance. How things transpire in this drama are predictable and the “surprise” confrontation in the end is anything but. I think maybe a documentary of those turbulent times would have been more meaningful.

One thing that movie buffs, this one anyway, love to do is to keep a lookout for all the neighborhoods and landmarks that make Boston the Hub of the Universe. Aside for a requisite shot of the Mystic River Bridge, I never felt like I was actually in Boston. This is probably because “The Walk” was shot in New Orleans and, I am sorry, NO is not a stand-in for the Hub

Vertical Entertainment opens "The Walk" in select theaters and on VOD on 6/10/22.