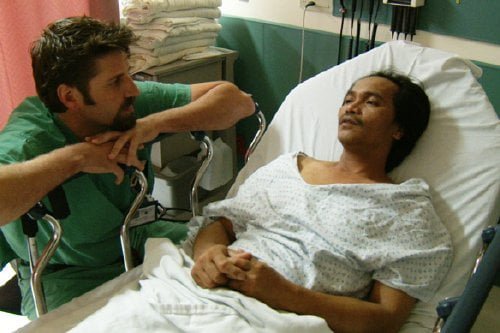 The struggling economy caused by the Bush Administration bungling and bad decisions resulted in a massive increase in the rolls of the unemployed across the US. But, because there was no national health care, most of these unfortunates do not have health coverage and, to get medical treatment, they must go to a public hospital and wait to be called from “The Waiting Room.”

In an economy flooded with people who've never anticipated not having health insurance along with those whose circumstances have never allowed them the luxury, the emergency rooms of public hospitals are now being overloaded with those with no recourse. Director/cinematographer Peter Nicks is a fly on the wall and an unseen up close and personal observer for 24 hours at Oakland's Highland Hospital and its overflow in "The Waiting Room." As strong an indictment against America's healthcare system as Michael Moore's "Sicko" without the proselytizing and (perhaps?) an inadvertent plug for Obamacare, Nicks's elegant piece of work recalls Frederick Wiseman with voice overs. We are only aware of the filmmaker's presence once (he expresses astonishment at a patient's predicament) as he chronicles the hard working and caring staff and their parade of patients from all walks of life with all manner of stories. The first person we meet is Certified Nurse Assistant Cynthia Y. Johnson, a woman with an incredible bedside manner who is seemingly incapable of being flustered. She manages the waiting room, comforting, triaging and escalating the constant influx of humanity. We meet a father frustrated with his first experience in this system, unable to bring his sick daughter to a regular doctor after his first year without a job. Eric Morgan is there with his girlfriend after having gone through tests and a diagnosis of testicular cancer only to have his emergency surgery canceled when Kaiser, the private hospital he'd been patronizing, finally realized he wasn't a member. There's the repeat substance abuser whose Pastor will not allow him back into his halfway program and Dr. White informs us that he cannot allow the man out of his highly needed bed without a place to go - Highland must keep people as much for social as medical reasons. Another doctor is flustered when a man who claims to have been sent to the E.R. for dialysis treatments, something the medico has never encountered, demands to be left to die rather than continue to fight the system he's been ground down by. A man with excruciating chronic pain cannot work laying carpet yet cannot get an appointment for a doctor to get him on disability for months. We witness a system that is beyond broken, hanging on only because some people care enough to dodge and feint around it. Just watching a team of doctors and schedulers trying to assign patients to beds seems like air traffic control at a busy airport under siege. Nicks and his editor (Lawrence Lerew) make point after point by simply showing us a day in Highland's E.R. admittance. The camera work is astonishingly fluid and seemingly unobtrusive, even documenting a fifteen year old gunshot victim a team cannot save. The only reason to wonder about the filmmaking crew's presence is because of the extraordinary staff on display - can they really be this saintly? White is young and the most dedicated and kind of physicians, finishing his grueling day with the observation that it will take him another two hours to tie up the day's loose ends. After an overnight where the waiting room still never once comes close to emptying, Johnson arrives for another day of work and we're left wondering just where she finds the inner strength. "The Waiting Room" is an engrossing, eye opening look at the mess American healthcare is in, the heroics involved in propping it up and the endurance necessary these days to be sick without insurance.

This is a concise (81 minutes) documentary on a day in the life of the Highland Hospital in Oakland, California. Filmmaker Peter Nicks uses a cinema verite style as his camera follows the key figures in the ER/Outpatient care unit at Highland. This free-reining camera, combined with voice-overs by the key players, follows nurses, doctor, administrator and social worker as they cope with the daily flood of patients clamoring for health care without insurance. The most striking thing about “The Waiting Room” is the determination of all of these health caregivers to make sure that everyone that comes in is taken care of – injuries treated and beds found for their needy patients. The staff members of Highland Hospital ER, if representative of health care professionals in the US, are poster children for how an emergency room can be effectively run, despite the reams of bureaucratic red tape, lack of beds and too many patients. The obvious dedication of the doctors and nurses to their patients is shown through the eyes of a variety of patients – a man with a gunshot wound, a young girl running a fever of 103.6 degrees and others – as their caretakers try to make them well. We see their fears and frustrations as the go to the ER because they have no where else to go. When a 15-year old girl, the victim of a shooting, is rushed in, everything is dropped as all the ER doctors and nurses swarm around the body in a futile attempt to save her. When the team of medicos are forced to give up on the girl, you can see the pain and loss these professionals feel. If at all possible, I never want to go to a hospital. But if I do, I am heartened to think that there are people out there, giving care and healing. Documentary maker Nicks provides us with an eye opening work about the life in a day of an ER that makes any reality TV pale in comparison. This is real reality.