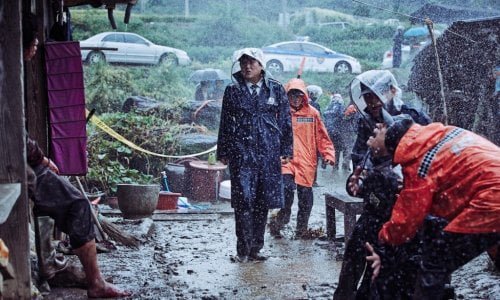 Sgt. Jong-gu's (Kwak Do-Won, "The Yellow Sea") wife insists he eat breakfast before attending to the early morning call about the death of a neighboring ginseng farmer's wife. His frantic pace lets up, but when he finally arrives, he finds a horrific murder scene, the dazed, blood-drenched pig farmer Heung-gak, already cuffed and charged. But when medical experts pinpoint mushrooms as the cause for the craziness, Jong-gu's not convinced. He begins hearing odd tales about a Japanese stranger (Kunimura Jun, "Kill Bill") as more and more eerie occurrences plague his village and his own daughter Hyo-jin (Kim Hwan-hee) succumbs to "The Wailing."

This exquisitely crafted film from writer/director Na Hong-Jin ("The Chaser") uses Korea's past to instill present fear. While it is reminiscent of Bong Joon-ho's "Memories of Murder" with its comical cops, awful crimes, rural locations and incessant rain, "The Wailing" adds a supernatural aspect which Hong-Jin keeps twisting, throwing us and his protagonist off balance until the very last moments. Catatonic, Heung-gak is taken to the hospital as Jong-gu and his partner Seong-kok (Han-Cheol Jo) find more disturbing evidence in his home. They interview a local man who recently bagged a deer, only to tumble down a hill. Coming to, he saw the red-eyed stranger, clad only in a loincloth, gorging on his raw kill. Back at the office that evening, the two freak out when the power's cut, both seeing a threatening woman outside their window. Then tragedy strikes Gokseong again, a house burned to the ground, its crazed owner attacking everyone at the chaotic scene. As Jung-ho takes a smoke break, an odd young woman (Chun Woo-Hee) pitches stones at him. When he finally gets her to talk, she tells him the owner killed the home's inhabitants after an old woman arranged for a shaman to come in, believing the stranger was a ghost who wanted to suck her blood dry. She leads him behind the crime scene tape, but when he momentarily looks away, she disappears. Jung-ho's captain is not amused by his report. When Hyo-jin falls ill and begins cursing at him, Jung-ho and Seong-kok, along with Seong-kok's nephew, a deacon who speaks rudimentary Japanese, set out to find the stranger's home in the forest. They find a vicious dog and shocking evidence, but when they return later, it is gone. Hyo-jin's condition deteriorates and Jong-ho agrees to call in shaman Il-gwang (Hwang Jung-Min). Hong-Jin did exhaustive location scouting across Korea and his meticulous attention to detail pays off. Jung-ho's traditional, gated home of multiple connected buildings aids in suspense as well as providing the perfect courtyard for the Shaman's elaborate rite, a noisy affair complete with drummers and animal sacrifice (crosscut with the stranger's remote response). Gory practical effects and makeup are very well done, as is art direction which captures both rural living and odd artifacts, like the withered snapdragons resembling skulls Jong-ho finds at crime scenes. Director of Photography Hong Kyung-pyo ("Snowpiercer") uses natural lighting and stylish camera work to complement Hong-Jin's vision. Kwak Do-Won is perfect as the overwhelmed officer, the comical edge of earlier goings turning to desperation. As the three who leave us guessing, Kunimura Jun possesses a quiet air of inscrutability, Hwang Jung-Min switches on and off as the ultimate showman dependent on his costume and, best of all, Chun Woo-Hee is spine-tinglingly eerie, almost ghostlike in her demeanor. Young Kim Hwan-hee charms before her physically frightening transformation. The film's final act may be seen as confusing, Hong-Jin pulling the rug out from under seemingly one too many times, but let the film sit for a while and the pieces come together. Jung-gu's last stand is akin to Christ's temptation in the desert and it is all the more powerful because he - and we - are unsure who's his devil. Grade: