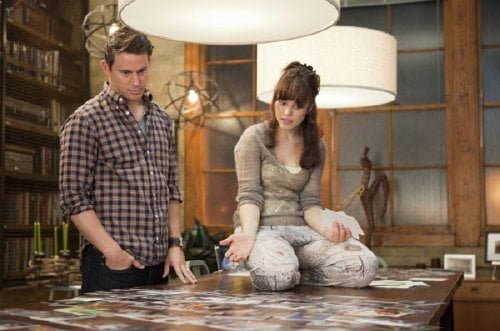 Paige (Rachel McAdams) and Leo (Channing Tatum) are deliriously in love and their future looks bright, but a tragic car accident throws Paige into a life-threatening coma. When she finally awakens, she has no memory of Leo and their marriage and he must work very hard to win her heart a second time in “The Vow.”

After leaving Chicago's Music Box Theater in evening snowfall, newlyweds Leo (Channing Tatum, "Dear John," "Haywire") and Paige (Rachel McAdams, "The Notebook," "The Time Traveler's Wife") are rear ended by a truck. Paige's head smashes through the windshield and she's kept in a medically induced coma so her brain can heal. When she awakens, she has no memory of the past five years but Leo is determined to regain her love and keep "The Vow." Director Michael Sucsy did a fine job recreating the Maysles brothers' "Grey Gardens" for HBO, but for his theatrical debut it looks like he and screenwriters Jason Katims (TV's 'Friday Night Lights,' 'Parenthood') and Abby Kohn & Marc Silverstein ("He's Just Not That Into You") took the true story of Kim and Krickett Carpenter of New Mexico and threw out everything but the hook - young newlywed awakens from coma and cannot remember her husband - and melded it with two or three of star Rachel McAdams's former films. In "The Notebook," her character was being kept away from her hunky lover by her rich family and their preferred mate. In "The Time Traveler's Wife," her character was a sculptor with a chilly looking Boho chic studio in Chicago. One could even stretch into her unappealing shallowness which is accentuated when her wealthy parents enter the scene in "Midnight in Paris." The film begins with some obvious 'movie snow' and the accident scene, refreshing, at least, for dispensing with the usual 'out of nowhere sideswipe.' As Leo waits for Paige to come out of her coma, his memory flashbacks fill us in with their back story - how he nervously struck up a conversation on the street, how he wooed her with cold medicines and condoms and how his roommates all fell in love with their love story, including the wedding presided over by one of them (Lucas Bryant, TV's 'Haven,' looking hipster foolish in a top hat) held illegally in the Art Institute and including the vows each wrote on the back of a Cafe Mneumonic menu. Then he meets her parents for the first time and Bill (Sam Neill) and Rita Thornton (Jessica Lange) have the subtlety of a steamroller. The Paige who awakens all too easily slips into her 'old life,' where she is so radically different from who she was with Leo we expect some radical, jolting revelation to explain why her memory cuts out when it did. But, in sticking with the Carpenters' story, she never does remember and the 'shocking' incident revealed in the third act doesn't explain how a pampered Waspy law student with a weaselly fiance (Scott Speedman, "The Strangers," "Barney's Version") turned into a tattooed sculptor with the far nicer (and better looking) Leo. Who she's having trouble accepting because she only remembers the former. After the first act, the film just always seems awry and it never recovers, despite a decent closure. One example - Paige initially tries to live with Leo, but she succumbs and heads back to the more finely feathered nest of mom and dad, ostensibly to help with her sister Gwen's (Jessica McNamee) wedding. At an engagement party, Leo is on hand to help finesse Ryan's (Dillon Casey, "Creature") way out of an awkward remark overheard by Gwen. OK, the guy's now got family backing but it never goes anywhere other than for Gwen to tell Paige she likes Leo. Timing issues with plot points, drifting and inexplicable story strands compound the film's generally off tone. The script goes out of its way to use words like 'remember' and 'forget' a lot (and there's that Cafe), but never addresses the basic preference changes which amnesia seems to induce here. McAdams enjoys a wholesome kind of sexiness she makes more interesting with a mischievous glint, but her transformation from pre to post-coma Paige makes little sense - she's like robo-coma girl. Channing Tatum is extremely appealing as Leo, a huge studly guy who's sensitive and romantic. In fact, as written here, he's too perfect. Not a single member of the supporting cast makes any kind of impression with the possible exception of Wendy Crewson ("Away From Her") as Paige's doctor. They're all stock characters (and, oddly, the majority imported from Canada). "The Vow" is all wrapped up with a Valentine's Day weekend release, but its emotions ring hollow.

Chick flick. That was my first thought going into “The Vow” and last thought coming out. And, if the sea of femme faces raptly watching the romantic drama unfold is an indication, I am right. Inspired by the true life events of Kim and Krickitt Carpenter, the story begins with Paige and Leo meeting cute, dating cute and marrying cute with the delightful Chicago backdrop. (One of my favorite cities.) Then, The Accident happens. At this point “The Vow” follows a conventional structure. Paige comes out of the coma but her damaged brain lost all short-term memory, including her life with Leo. He is stalwart, though, and resists Paige’s parents, Rita (Jessica Lange) and Bill (Sam Neill), plans to bring her home to recover. As Leo puts it, “I’ve got to make my wife fall in love with me again,” (this got an audience “Awww!”) and, once again, they date cute, with a second first embrace, second first kiss, etcetera, etcetera, etcetera. The predictability of this sentimental romantic drama is obvious from the very start and the multiple scribe-written screenplay follows a clichéd path leading to the expected happily ever after ending. Dialog is wooden but the fine cast tries to breathe life into their characters. I like the pairing of Tatum and McAdams and they have a nice on-screen chemistry. Lange and Neill flesh out their overly protective mom and dad characters (with a terrible secret) that could have been one-dimensional in lesser hands. First-time feature director and co-writer Michael Sucsy gives us a by-the-numbers film that will appeal to mature femme audiences, only. Oh, and fans of Chicago, too.