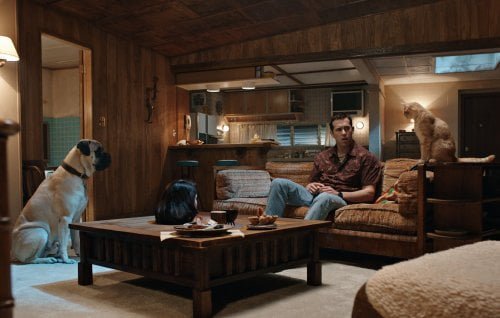 Jerry (Ryan Reynolds) is a really nice guy who enjoys his nine-to-five job at the bathtub factory. But, he has a past. He is mentally ill and under the care of a court appointed psychiatrist (Jackie Weaver. When he stops taking his meds he begins to hear voices, particularly from his evil cat, Mr. Whiskers, and his kindly dog, Bosco, and things do not go well with him hearing “The Voices.”

Shy Jerry Hickfang (Ryan Reynolds) gets a boost from his boss at the Milton Fixture and Faucet company when he's informed that, as the newest in their shipping department, he's to be part of the annual company party planning committee. Now he might have a chance to sidle up to Fiona (Gemma Arterton, "Hansel & Gretel: Witch Hunters") in accounting. Even after she stands him up, Jerry attempts to come to her rescue but things go disastrously wrong as he's advised by "The Voices." However did Marjane Satrapi, the director of the Oscar nominated "Persepolis," get drawn to this horror comedy written by "Paranormal Activity 2's" Michael R. Perry? Everything about this movie is weird, but it's buoyed by an amazing performance by Ryan Reynolds, who not only plays the psychotic pink-jumpsuited shipping laborer but provides the vocal performances for his evil, Scottish-accented cat Mr. Whiskers and his golly-gee good-hearted dog Bosco. By the time we get to the closing singalong (with Jesus!), you'll be left wondering if Satrapi's the one who's been taking Jerry's meds. Because, you see, while Jerry's therapist Dr. Warren (Jacki Weaver, "Silver Linings Playbook") is pleased to see him coming out of his shell, we can see her unease at how he evades questions about hearing voices, a condition which afflicted his mother (she called them her 'angels'). As the film progresses, she becomes more insistent that he take his meds, informing him that she'll have to report him otherwise. We know that back at home, Jerry is jeered at by Mr. Whiskers as Bosco frets, the devil sitting on one shoulder, an angel on the other. Jerry invites Fiona for something he promises will be special, but she confides in Lisa (Anna Kendrick) that she's doing something else. It's clear from Lisa's concern that Jerry be told that Lisa's interested. Jerry's evening waiting for Fiona at the local Chinese is indeed something different, sporting a floor show better seen than described. Driving home in the rain, Jerry spots a soaked Fiona and offers to take her home, but she's game now, suggesting what she really needs is a good, greasy burger. But when a deer runs out into the road (voiced by Reynolds again), Jerry's humane dispatch of the animal horrifies the woman he'd just imagined sporting wings and the next thing we know, her head is in his freezer. And just to illustrate how weird "The Voices" really is, this is where the film dips a bit, becoming almost conventional when the serial killing kicks in. We pretty much know what's on tap for a while, although Mr. Whiskers and Bosco keep things interesting (and Satrapi uses their 'innocence' for some creepy mise-en-scene). Indeed, Jerry and Mr. Whiskers are like an insane version of Jon and Garfield, Whiskers always commenting on Jerry's 'dating' life. Things take an upturn when Jerry comes clean to Dr. Warren, him declaring her shocked rejoinder like '10 years of therapy in 10 seconds.' "The Voices" is a true cult item in the making. Grade:

I can say one thing about “The Voices.” It is a wacked and very dark comedy on one hand and a cry for mental health on the other. This is by Marjane Satrapi, whose first film, “Persepolis (2007),” earned her an Oscar nomination for Best Animated and Best Foreign Language Feature. The latter film was serious drama dealing with serious social and historical issues like the Iraq-Iran war and women’s rights in Iran (or, lack thereof). The filmmaker does a 180-degree turnaround with her latest. The best thing about “The Voices” is the unexpected comic performance by Ryan Reynolds who plays the nice guy turned killer – but still a nice guy. He also gives voice to Mr. Whiskers and Bosco and a deer that Jerry runs over by accident – which leads you down the macabre and funny path the film takes. It is a performance that is both likable and off-putting. Although Reynolds is the center attraction for “The Voices,” Gemma Arterton is notable as the beautiful Fiona, the object of Jerry’s unbalanced affections. Most of her performance is as a talking head victim who Jerry stores in the refrigerator. The rest of the cast, including Anna Kendrick as another of our mad man’s victims, are mostly just background. That is OK, though, as it is Ryan Reynolds’s schizophrenic character that is the draw.